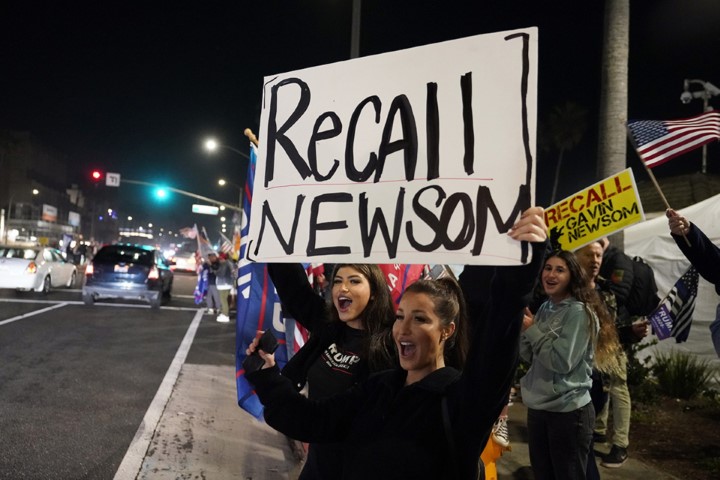 The editorial board met over chips and salsa at a possibly open indoor dining establishment in our hometown to discuss the recall.  This is actually the 6th recall Newsom has faced since being elected about 2 years ago.  Those recalls never got the steam or funding like this one has.  Here is what we feel will happen and our prediction.

First the recall will go to a vote, with 1.3 million signatures gathered, and a very high accuracy rate so far, only about 600k more signatures are needed.  This will not be a hard feat since around 6 million Golden State voters voted for Trump last election.  We firmly believe Gavin Newsom will be a former Governor by summer’s end.  Personally, we feel he will wind up working for his Aunt Nancy Pelosi.

We feel this way due to a variety of reasons.  Namely his poor handling of the “pandemic” I use air quotes not because it’s a hoax but due to the ever-changing rules.  Lock down, open partially, lock down, outdoor only, barber and nail places ok, lock down again, ICU filling to quick, lockdown extended, lockdown ends, and his refusal to release the data he attributes the lockdown too.  Then he comes out and says we serfs wouldn’t understand.  However most painfully is the lack of communication with the county health directors with regard to his orders on reopening.  The Chief’s mother was on a Zoom call with Dr. Olivia Kasirye (the replacement for racist Dr. Beilensen) who was befuddled at the re-opening in Sac County effective the following day, having said she had spoken to Newsom an hour prior and this never came up.  Again, Newsom is toast.

However here is the main stumbling block; as of press-time, 3 major GOP candidates have thrown their names into the ring to replace Newsom.  You have “Sandy Eggo” former Mayor Kevin Falconour who has raised a little over a million and is in need of work; Doug Ose the former congressman from Sacramento, a similar moderate to Falconour but can self-fund; and John Cox, a businessman and former Republican gubernatorial nominee who can self-fund, he is the most conservative of the three but was blown out 2 short years ago.

Just like McDonald’s Monopoly contest that takes place every so often, many will enter; 1 will win.  I can see a field of about 15 or so easily, most of whom are GOP types, several fringe players will enter, I broke down the main three above.

How we see it playing out is as follows; about 62% vote to throw the useless pond scum out.  This will be viewed as a favor as he will be able to enjoy a meal at the French Laundry in Napa as often as he would like.  He can even say he is “one of us.”  I use 62% because all food service, bar, gym, retail, and other affected business workers will want him gone, and these are the groups democrats love to pander to the most.  Most of the affected also happen to be those of color, another group the democrats are used to pandering too.

As for who replaces Gavin, get ready…it will be another Democrat.  The GOP will split the vote regionally; Falconer gets San Diego vote, Cox the LA area vote, and Ose gets the Sac, and parts of Bay Area vote.  In essence they will split the GOP voter block.  This will allow an LA democrat to take over.  This is the main difference between the GOP and democrats in this state, while our side doesn’t want a farm team, the democrats line up behind one nominee and let them win.  The democrat will focus on being anti- Gavin, but just as progressive.  Remember 2/3 of the voters in this state live south of the Bakersfield area. In addition, every voter gets a ballot (sometimes more) in this state so while the GOP will win the battle in our opinion, they will lose the war.  Get ready for a far left LA democrat moving into Sacramento to rape and pillage the state even more.