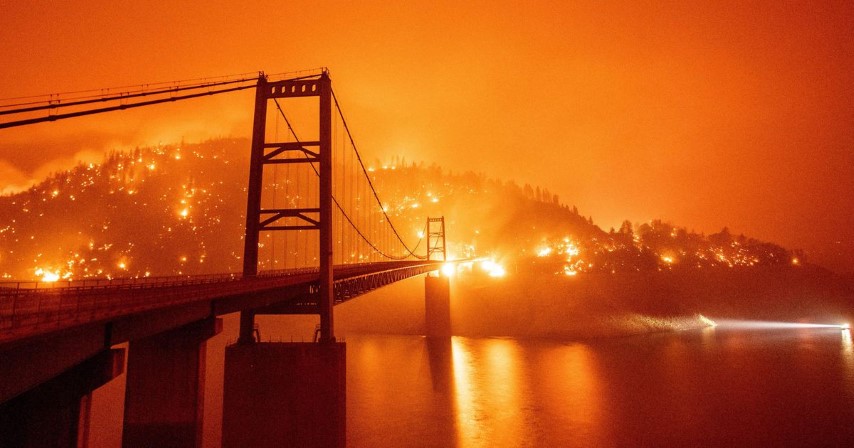 With north of two million acres up in flames this year and several deaths, President Trump decided to expand his visit to Nevada by making a stop in northern California. Right on cue, our Democrat Governor and the media decided to use this visit as an opportunity to promote their leftist agenda.

SACRAMENTO (AP) – With the smell of California wildfires in the air, President Donald Trump on Monday ignored the scientific consensus that climate change is playing a central role in historic West Coast infernos and renewed his unfounded claim that poor forest management is mostly to blame.

The fires are threatening to become another front in Trump’s reelection bid, which is already facing hurdles because of the coronavirus pandemic, joblessness and social unrest. His Democratic challenger, Joe Biden, in his own speech on Monday said the destruction and mounting death toll across California, Oregon and Washington require stronger presidential leadership and labeled Trump a “climate arsonist.”

Trump traveled to Northern California to be briefed by Democratic Gov. Gavin Newsom and other state and federal officials. At one point, state Natural Resources Agency Secretary Wade Crowfoot urged the president to “recognize the changing climate and what it means to our forests.”

Please note the editorializing in this supposed news piece. Opinion is claimed as fact “… Trump on Monday ignored the scientific consensus that climate change is playing a central role in historic West Coast infernos and renewed his unfounded claim that poor forest management is mostly to blame.”

Oh, and Hidin’ Biden came out just long enough to call Trump a “climate arsonist” and upon seeing his shadow, he promptly retreated to campaign for six more weeks from his basement.

Trump’s response was that it will get cooler. As usual, Trump is right. Cooler is usually called “fall” which is typically followed by “winter” except in Roland Emmerich movies—which is about the only place where Michael Moore, Al Gore, or Gavin Newsom have a chance of hell in being right.

Also, the so-called proof of global warming referenced in the Associated Press story was abandoned over a decade ago in favor of climate change because it is less precise and requires even less evidence than evolution for people to believe it. In fact, this whole climate change idea is a matter of religion not science. Those that cling to the climate mantra do so by faith and despite evidence. They cherry-pick their “facts” and refuse to look at all the evidence because in the final analysis, the facts don’t matter. If something doesn’t fit the template it is dismissed out of hand. Like all sacred cows of the Left, the climate argument is an emotional one not a rational one.

I was going to blog on this subject before this article on Trump came out today but since its slightly more timely now, I took it out of my “hope to blog on it someday” pile and went to work on it. What was a slight epiphany on this issue was yesterday’s congregational prayer.

Yep, Trump wasn’t even on my mind when I decided to write on the subject of the California wildfires fires. Contrary to what a few liberals with whom I am acquainted accuse me of doing, I don’t watch Fox News or read Trump on Twitter to get my marching orders.

Yesterday, our pastor prayed that God would cause the fires to cease, protect the firefighters, relieve the victims of the fire, stop lightning strikes, clean the air, make it rain, and generally just make the fires go away. His list was long and thorough, but it hit me as he was going thru it that the fires are a direct result of man refusing to obey the Dominion Mandate all the way back in the early part of Genesis. In a sense, the pastor was asking God to honor and bless our disobedience to one of His oldest Commandments and relieve us of the consequences of our disobedience.

In Christianity we have a word for not obeying God, it is “sin.” Sin is derived from a Greek archery term meaning to miss the mark (or target). To lift a phrase from Campus Crusade for Christ’s most famous tract, they describe a state of sin as people being either passively indifferent or in active rebellion.

This brings us back to the subject of forests. In the Bible, there is no such thing as a “virgin forest.” Man is commanded in the Garden to make the whole world into a garden. We are to tend, nurture, and cultivate all the land in the world. Leaving land in a state of nature is contrary to God’s command.

When man refuses to obey God, it is called sin. Thus, when man (or mankind) refuses to obey God concerning caring for our environment, is it any wonder that the creation goes out of control? If we don’t remove the unhealthy trees, harvest the good ones, and manage the forest as we were told to do, then we will be expelled from the land. Isn’t that about the sum total of what’s happening now? Please note that states with better forest management don’t have these types of fires on a regular basis.

FYI, per Scripture, failing to obey God is also grounds for being expelled from the land.

So, either way California, you have submitted yourselves to God’s wrath through disobedience.

Hey, California Democrats, if you want to see the real culprits of this manmade conflagration, look in the mirror. Or as one of my old pastors used to say, “You get the government that you deserve.”

When Democrats complain that Trump is blaming poor forest management, its ok because Trump is on God’s side. God’s Word is clear that we are to take dominion over the land, not allow it to have dominion over us. We are to tend the Garden not let it go feral and overgrown.

Oh, final thought. Do you remember all those old cowboy and Indian shows where the Indian with the bow and arrow would stalk the deer and shoot it at close range? It can’t happen now because we don’t clear the undergrowth like the Indians did in the days before the National Park Service. Try bow hunting now and you won’t get within a country mile of a deer.

You see, in the fall of the year, before the Indians went out of the mountains to the lowlands for the winter, they lit the forest on fire and burned away all the undergrowth. Because there wasn’t much to burn, only the grass and undergrowth was burned. The trees were not harmed but actually grew better as a result. The benefit for the Indian was better feed for the animals and more food to harvest the following year. Letting fires burn is natural, controlling how much fuel accumulates on the forest floor before it does is our job.