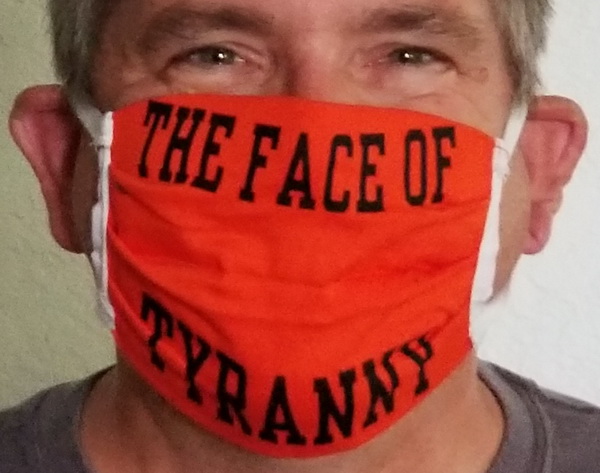 And he causeth all, both small and great, rich and poor, free and bond, to receive a mark in their right hand, or in their foreheads: And that no man might buy or sell, save he that had the mark…
Revelation 13:16-17

Tried buying food or getting your “retail therapy” out of the way lately? Tried it without a mask?

Its ironic that the very same churches (the Dispensational ones) that were warning us about the end of the Age, Jesus was coming back any minute so be ready, and beware the “Mark of the Beast;” the very same ones that claimed they were warning us about a time when unless you were willing to accept the Mark—which also meant you were automatically going to Hell, not passing Go, and not collecting $200; thanks Hal Lindsey—are amongst the churches that shutdown when told to do so. Like all the others, they obeyed blindly and threw-in with all the rest.

A time of persecution which they were warning us about for decades is upon us, and they all ignored their own warnings and threw in with the government. They complied without so much as a whimper when told to shutdown because they were nonessential. According to their interpretation of the above passage, other groups that didn’t heed Dispensationalism and rejected Lindsey’s warnings were expected to be duped but these guys kept saying they knew better. Per Dispensationalism, martyrdom was better than receiving the Mark; at least until their 501 (c)(3) status was on the line. On this dry run for the Apocalypse, these guys folded like a bunch of cheap suits. Talk about epic failure. Apparently, 501 (c)(3) trumps Scripture every time.

If your church closed who’d notice?

There is a cause and effect relationship to closing churches and the rioting, burning neighborhoods, toppling statues, and despair of citizens on both coasts.

Since the 1980’s I have defined revival—which all evangelical churches claim they want—as: “when the church is culturally relevant.” The opposite is “if they put a padlock on your church’s door, would anybody notice?”

Well I guess we have our answer now.

Hey church, the government declared you irrelevant and nonessential, locked the doors, and nobody noticed. What does that say about your ministry? Oh, and you were ok with it too. Shame, Shame, Shame.

In my recent travels, I did meet one pastor in Idaho that refused to close his doors, the only one in his State by the way, and he was willing to go to jail to defend the right of his folks to worship. He said the police showed-up, he stated his case and the police not only left that day but left him alone, period. Too bad he’s the exception and not the rule. The fact that he lives in an open carry state—a behavior which he participates in every day—probably helped too.

Now in California and other places where Democrats reign unchallenged, you cannot buy or sell unless you bear the mark of the State. While the directive says there are exceptions for medical and a few other reasons, the practical effect is that no business establishment is willing to acknowledge that any exceptions or personal liberty exists. They are too afraid of prosecution by the State. Besides the lady at the salsa bar yesterday that was denied entry, there is a media account of the police being called to a Wal-Mart because a guy couldn’t get his four-year-old to wear said mask.

The children were reportedly not wearing masks and the three refused to leave. That’s when police were called to escort them out of the store.

VIDEO: Family Kicked Out Of Turlock Walmart For Not Wearing Masks

Thankfully, some localities and their police forces have said they will not ticket or arrest anyone for violating the mask order but this seems to be the exception as only areas with Republican officeholders are taking such positions; albeit generously wrapped in lots of weasel words.

Sacramento County Sheriff Scott Jones released a statement Friday encouraging the public to wear masks but will have his deputies focus on education instead of enforcement.

No mask, no problem? Here’s why police across the region are not enforcing the mask mandate

State sells oppression as only way to happiness

Meanwhile, the government is trying a “full court press” media campaign to pursue doubters to comply.

Arnold Schwarzenegger and three other former California governors joined Gov. Gavin Newsom on Monday in a video campaign promoting the use of face coverings to help prevent the spread of COVID-19.

Wilson, Davis, Schwarzenegger And Brown Join Gov. Newsom To Urge Use Of Masks

Folks I’ve been on vacation for the last three weeks, two of which were spent in the United States. (For purposes of this post: Idaho, Montana, and Wyoming.) This last week back in California has been a train wreck.

In the United States, I didn’t encounter anyone wearing a mask except occasionally as part of their working with the public. I saw no people voluntarily wearing a mask until a week into our trip when we got to Missoula, Montana. There we saw a few hippy-type folks muzzled-up. Missoula is only one of four counties in Montana that went for Hillary in 2016. My conclusion is that only Liberals–who are frightened to death or of death—wore masks just because. These guys are genuinely scared but everyone else was behaving like regular people. Oh, Missoula is known as Berkeley at 3,000 feet.

Gavin is Coming for you Barbara

In contrast, the despair and oppression hanging over California is palpable. People here think the current situation is “normal” or all that there. Such a pessimistic view is B.S.

Folks there is no metric, measure, trigger, or whatever you want to call it that will cause the mask requirement in California to be rescinded. It is here to stay until the Governor decides that we don’t need it. Newsom has just over two years remaining in his first term so don’t expect things to change anytime soon.

In case you didn’t hear, Emperor Newsom now has the total authority to decide which counties are not in compliance with his unilateral edicts. Thanks to our one party rule in this state, he can withhold state money from them whenever he feels the urge. Yep, its in the freshly signed budget.

Under Budget Deal, Gov. Newsom Has Power To Pull Funding From Counties That Disregard COVID-19 Rules.

But Newsom warned that counties that don’t comply with their virus containment plans will pay the price.

“I just did a budget deal with the California legislature,” Newsom said. “Two and a half billion dollars is conditioned on counties meeting their criteria under the emergency declaration related to COVID-19.”

Newsom added, “If they decide even though the numbers are going up ‘we’ve got this, we’re going to dismiss these new rules and regulations,’ We’re going to attach some considerations and consequences to that. There’s simply two and a half billion dollars in that budget that simply will not flow to those counties that do that.”

Newsom to counties: Contain the virus or lose funding

Oh, thanks to the mask mandate, the wife and I have retained the services of a realtor and are actively looking to get out of California. We’ve had enough of the nonsense. Thankfully, California’s litigious Attorney General keeps a list of recommended states conservatives should consider moving to because California officials are not allowed to travel there.

I think it should be up to individuals whether they wish to participate in wearing a mask. Liberty used to be the American way.

Oh, and as reported here while I was on vacation, protestors involved in Some Black Lives Matter are immune from Covid-19. Here’s the scientific proof that we’re Really Right.

No evidence that Black Lives Matter protests have led to a spike in coronavirus cases, research says.