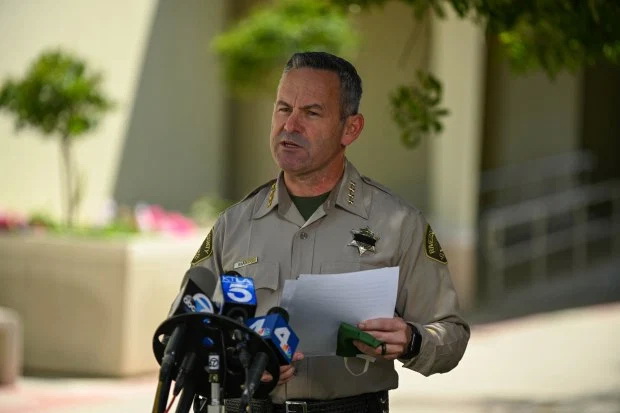 Chad Bianco… it’s all over Park’s blog (unless he’s recently deleted the posts) defeated “corrupt, drunk womanizer” Stanley Sniff as Sheriff of Riverside County. We needed Bianco because he could do Republican things like give out concealed carry permits by the thousands! Well Aaron, you got us a good one in Bianco, look at what this newly minted Doctor of Medicine had to say about Corona Virus in his County.

Sheriff Bianco has mandated everyone wear masks to cover their faces in public or risk a $1,000 fine or jail time.

The mandate went into effect on Sunday after Riverside University Health System indicated 946 confirmed coronavirus cases in the county.

“This is a valid order and enforceable by fine, imprisonment or both,” Bianco said on Monday in a video statement.

He added: “Not everybody’s getting the message.”

“Right now, you could be a carrier of this virus, spreading it to your family and friends.”

California sheriff warns he can arrest and fine people $1,000 for not wearing masks in public

There you have it boys and girls; Dr. Chad Bianco put down his scalpel and stethoscope and has donned a Sheriff’s badge in hopes to save the world! No one knows more about this disease then Dr. Bianco…. he is not the hero we asked for, but the hero we needed during these trying times! Fixated on cable news, he has all the information to make an informed decision on the heath crisis facing his county! A total of 25 folks have died in his county, out of 2.7 million, but let us not allow a good crisis to go to waste.

Keep in mind, he also announced there will be no checkpoints or traffic stops to pull over folks not in compliance…. I guess he didn’t go full Adolf Hitler on us. He also said you will not be stopped while walking or hiking. After reading those statements aren’t you left asking “What’s the point of this order?”

Additionally, in the People’s Republic of California, we have been releasing “non-violent criminals” from both our prisons and jails to prevent the spread of this disease. Yet this MORON wants to arrest and jail you for not wearing a mask in public? And what about this fine? Good grief! Please help me understand the logic behind this, you can steal from a store and not even get cited, yet walk around in Bianco’s County sans a mask and you will be fined $1,000?

Well that Aaron Park sure knows how to pick ‘em!

BTW We here at Reallyright.com encourage Aaron to wear a mask at all times, not just due to his looks but due to the toxic emissions coming from his mouth. Frankly I’m surprised the EPA hasn’t shut him down yet.