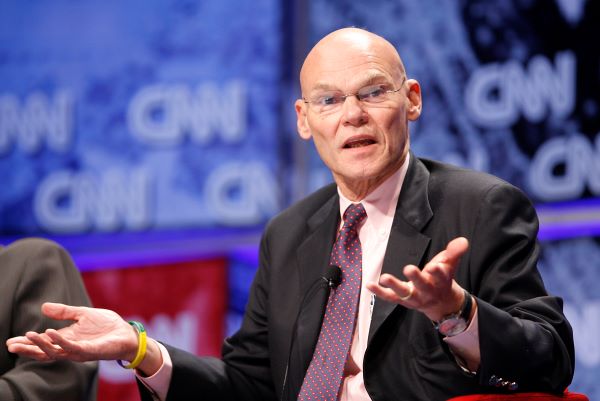 That is an old reference from WWE Wrestling; however, unlike that fake television, this is real life! The one nice thing about a man with the nickname the “Ragin’ Cajun’” is you know once he starts, it’s hard to get him to stop! James Carville followed up his epic rant the other day by attacking even more!

In reference to Sanders and Warren’s socialist beliefs “They’ve tacked off the damn radar screen!” This coming from Carville a self-described liberal himself.

And he still wasn’t done…..

“We just had an election in 2018. We did great. We talked about everything we needed to talk about and we won,” he said in a Vox interview published on Friday. “And now it’s like we’re losing our damn minds. Someone’s got to step their game up here.”

According to Carville, both Sanders and Sens. Elizabeth Warren, D-Mass., were pushing “stupid” ideas about higher education.

“Democrats talking about free college tuition or debt forgiveness. I’m not here to debate the idea. What I can tell you is that people all over this country worked their way through school, sent their kids to school, paid off student loans. They don’t want to hear this s–t. And you saw Warren confronted by an angry voter over this. It’s just not a winning message,” he said.

Carville also took a shot at Sanders for saying that he wanted to expand voting rights for people like the Boston bomber. Sanders, the well-known Democratic strategist suggested, would be ineffective as president and wasn’t representative of the Democratic Party. Instead, Carville said, he is an “ideologue.”

The Cajun is getting so hot blood may shoot out of his eyes!!!!!

“[H]ere’s what I do know: Sanders might get 280 electoral votes and win the presidency and maybe we keep the House,” Carville said. “But there’s no chance in hell we’ll ever win the Senate with Sanders at the top of the party defining it for the public …So long as McConnell runs the Senate, it’s game over. There’s no chance we’ll change the courts and nothing will happen, and he’ll just be sitting up there screaming in the microphone about the revolution.”

No fear New York Times writer and fellow re-moron (that’s what we here call people whom neither the retards or morons want to call one of their own) had this to say about Ole Jimmy and his Alma Mater LSU.

Do the Warren/Sanders “free public college” proposals include LSU, or would it only apply to actual schools?

Big mistake “Binyamin” or however the heck your first name is spelled because the Cajun made fresh gumbo out of you….

“You know how f—–g patronizing that is to people in the South or in the middle of the country? First, LSU has an unusually high graduation rate, but that’s not the point. It’s the goddamn smugness. This is from a guy who lives in New York and serves on the Times editorial board and there’s not a single person he knows that doesn’t pat him on the back for that kind of tweet. He’s so f—–g smart.

“[Binyamin] Appelbaum doesn’t speak for the Democratic Party, but he does represent the urbanist mindset,” he said. “We can’t win the Senate by looking down at people. The Democratic Party has to drive a narrative that doesn’t give off vapors that we’re smarter than everyone or culturally arrogant.”

Ole Jimmy is so angry he may bring back Crossfire just to let out some of his rage!

Thing is it’s not just Carville folks check these additional Democrats out:

But like Carville, former Senate Majority Leader Harry Reid similarly predicted trouble for Democrats because of their immigration and health care policies. And earlier this week, one of former President Obama’s advisers said he no longer recognized the Democratic Party.

“Look, I just don’t recognize the Democratic Party right now,” former Obama National Finance Committee Member Don Peebles said. “I mean, the party has turned so far-left. Also, to see members of Congress jointly dressing up in white as some form of protest or solidarity at the State of the Union address is astonishing.”

The concerns about elitism aren’t new either. MSNBC host Chris Matthews has warned Democrats about appearing out of touch with American voters. “There’s too much self-saluting, too many events that seem to be about saluting them,” he previously said. Matthews also argued that former Democratic presidential nominee Hillary Clinton “personified the elite Democratic Party — the party that had gotten a little too Ivy League, a little too secular.”

Problem is the divide is only getting worse in the party.

Progressives like Rep. Alexandria Ocasio-Cortez, D-N.Y., and filmmaker Michael Moore maintain that pushing progressive policies is critical to winning elections. Former Vice President Joe Biden, the perceived Democratic moderate in 2020, caught flak from Ocasio-Cortez for not going far enough on climate change policy. He also changed his decades-old position on the Hyde Amendment — a bipartisan measure blocking funding for most abortions — amid criticism from his own party.

My thoughts on this are reflected on previous blog posts on this site. When you talk down or look down at someone, it not only makes them more likely to support their candidate, it also makes them less likely to ever support yours. Elitism, urbanism and socialism are very scary, and no one really wants to be lumped in with that crowd. Be wary of pushing a generation of voters out the window because it just increases likelihood they will never come back. The exchange between Liz Warren and that voter took place earlier this year.

The voter asked “My daughter is getting out of school. I’ve saved all my money. She doesn’t have any student loans. Am I going to get my money back?”

Warren’s retort “Of course not.”

Voter Challenges Warren’s Student Loan Forgiveness Plan: “Those Of Us Who Did The Right Thing Get Screwed?

This is classic liberal elitism, oh you saved your money, well thanks for playing…cry poor next time. I doubt that little girl’s folks will be supporting the new Democrat Party any time soon.

Besides the Fox account of Carville’s interview, it can also be found on MSN news.
“We’re losing our damn minds”: James Carville unloads on the Democratic Party