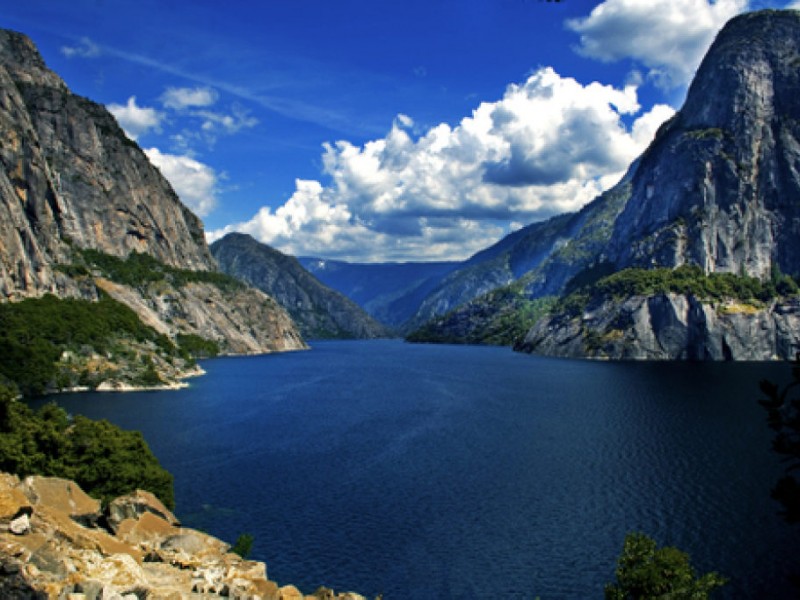 Our rainfall this year seems to be less than needed which got me to thinking about drought again. Folks, why fix our water problems in California when you can make it other people’s problem? The truth is that we haven’t made any serious efforts to improve water storage in California since Jerry Brown’s dad was governor in the 1960’s. Sure the population has quadrupled since then but as Alfred E Newman says, “What, me worry?”

Oh, just to be technically correct, Arnold authorized one dam be dismantled in Northern California while San Francisco is clamoring to dismantle their primary water source, Hetch Hetchy Reservoir (photo above).

Meanwhile both Brown and Newsom want to kill the Delta by syphoning water in such a way to send it to Los Angeles. Please note that this will be an environmental disaster and not produce any increase in the water already being transferred to the south state. It is a water quality not quantity issue.

So instead of fighting the self-imposed red tape here in California, folks want to get water from other states.

Proposal one is get the water from the Columbia River. Like you really believe that Oregon and Washington will gladly part with their water and allow it piped across their states and dumped in Shasta Lake so it can be flushed down to the ocean. Here’s a few stories on just that. Oh, just wait until you see what’s next!

Speculation is high that Oregon has, for the first time, begun formal exploration into the feasibility of sending surplus water from the Columbia River south to thirsty California. The success of the recently announced giant wind farm has water export proponents salivating at the chance to tap just a small portion of the average 265,000 cubic feet of water per second that slips by Oregon, unused but for power generation, fish habitat and limited shipping.

Closed-door sessions have been held privately in recent months to discuss the very future of the Columbia River as we know it today. People have been asking for Oregon’s water for a long time. In 1990 Kenneth Hahn, an LA County Supervisor, formally requested water from Oregon via pipe to offset the severe water shortages they were experiencing. Then governor Neil Goldschmidt said no to the request, as did then Washington governor Booth Gardner.

It is estimated that Oregon could supply California with approximately 8 billion gallons of water each day without any deleterious effect on either the environment or shipping. That amount of water could easily end, forever, the shortages that have plagued Southern California for decades. At the same time, jobs and revenue would flow into Oregon in numbers never seen before. It is estimated that at least 7,000 new temporary jobs would be created to construct the pipe and that 125 permanent jobs would be created in maintaining the pipe and pumps needed to supply the water. Revenue for this water, at current California rates, could easily top six million dollars per day or more. “That is over two billion dollars of revenue per year for Oregon for something that costs Oregon nothing,” noted Branxton.

From the San Diego Union-Tribune

The idea that intrigues us the most is a pipeline from the Columbia River, which separates Oregon and Washington. It is the fourth-largest river in the nation and has the greatest flow of any American river draining into the Pacific. In other words, it carries a lot of water.

A water pipeline from Oregon to California?

But folks, why just pipe water across two states from the fourth largest river in the country when you could go for number one. America likes number one so why not get the water for California from the Mississippi River? No Kidding!!!

The largest eastern river, the Mississippi, has about 30 times the average annual flow of the Colorado, and the Columbia has close to 10 times. Water from these and other large rivers pours unused into the sea.

We envision a major combined federal and private hallmark program for the nation – an Interstate Water System (IWS), which would rival in importance and transformative potential the Interstate Highway System, whose formation was championed by President Dwight Eisenhower. America already moves some water and stores it in man-made lakes, and the IWS would be designed to expand the country’s water-related infrastructure by crossing state boundaries to transport water from where America has an abundance of it to where it is needed. With modifications and expansions over time, no part of the U.S. need find itself short of water.

The IWS is practicable. Assume that an initial goal might be doubling the water flow, averaging about 20,000 cubic feet per second, to Colorado River system reservoirs. Pumping Mississippi River water to about 4,000-5,000 feet altitude would likely be needed to supply reservoirs Lake Mead (altitude 1,100 feet) and/or Lake Powell (altitude 3,600 feet). We estimate that fewer than 10 power plants of typical one-gigawatt size could provide the energy to move water halfway across the nation to double the flow of the Colorado River, while gravity-driven flow turning turbines below its reservoir lakes would eventually regenerate much of the input energy required.

A Bold Fix For The West’s Water Woes

Truthfully, I think Trump would support it if California and other western states asked but I just don’t see this happening.