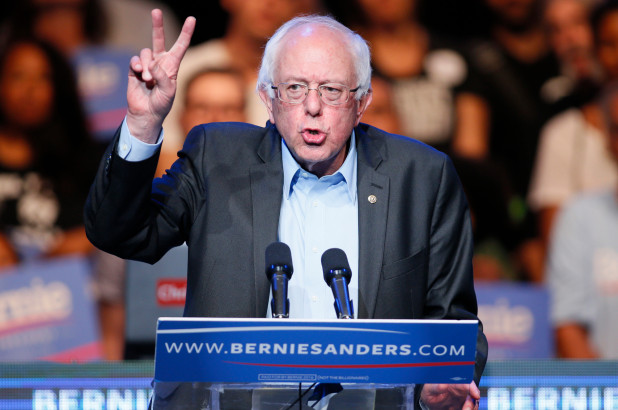 Just take a look at this. First they tried to tie Bernie up in DC for impeachment proceedings, then they went full “Hidin’ Biden”….now the powers that be have appointed Barney “Balls in his mouth” Frank and John “The Hit Man” Podesta on the DNC rules and platform committee. In case you live under a rock, Frank was a huge Clinton surrogate (no comment on if he is pregnant with Bill’s second child*) and Podesta served as Clinton’s past campaign manager. Podesta is famous due to a leaked email where he claimed he “wanted to stick a knife in Sander’s Campaign.” This has Sanders supporters even more riled up.

Some Democratic National Committee (DNC) members and supporters of Sen. Bernie Sanders (I-Vt.) are venting frustration at DNC Chairman Tom Perez over his initial appointments to the committees that will oversee the rules and party platform at the nominating convention in Milwaukee later this year.

Sanders’s allies are incensed by two names in particular: former Rep. Barney Frank (D-Mass.), who will co-chair the rules committee, and Hillary Clinton’s former campaign chairman John Podesta, who will have a seat on that committee.

The Sanders campaign unsuccessfully sought to have Frank removed from the rules committee in 2016, describing him as an “aggressive attack surrogate for the Clinton campaign.”

And Podesta, a longtime Washington political consultant and Clinton confidant, is viewed with contempt by some on the left. One of Podesta’s hacked emails from 2016 showed him asking a Democratic strategist where to “stick the knife in” Sanders, who lost the nomination to Clinton that year after a divisive primary contest.

The article does go on to say there is going to be representation from all candidates who win delegates proportionately, but this doesn’t pass the smell test. Bernie and his followers know they were screwed last go round and this just further pushes a narrative that the establishment hates their candidate. The DNC goes even further trying to assuage their concerns…saying…”we have only appointed a small number of appointments to each committee.” This is very tone deaf folks. It would be akin to the RNC nominating Ted Cruz, John Bolton, and John Kasich (or Mitt Romney) to the same body…all noted anti-Trump folks. While it may only be a token few appointments, Frank and Podesta have very large pulpits and can sway numerous people…like maybe folks who were Hillary supporters in the past?

In addition, check out this new way Iowa will be tabulating their Caucus results next week. Technically there will be 3 “winners.” Yeah check this out. Yeah, they will announce who won “The first vote, the final vote, and who won the most delegates.” In 2016, Bernie often got the votes and Hillary got the delegates. What a confidence builder for faith in the results.

So I guess we will crown a top 3. No word if everyone gets a participation trophy or recognition of who won the most votes from deceased members. This is literally unbelievable, and will create chaos on election night. In addition, they have set up satellite caucuses in different countries to be able to vote as well that night…including one in…wait for it…Georgia, as in the country just outside Russia. The one CNN’s Don Lemon said is across the little lake from Ukraine!!

You know the Clintons are involved because there are 69 (no coincidence) of these remote locations around the state that get added to congressional district results, plus an additional 25 outside of Iowa in 13 different states (I guess the cemeteries now are precincts). These votes get added to the total votes statewide, as well as 3 international sites, including the aforementioned location right near Russia.

Iowa is changing its caucus rules. Here’s what’s different in 2020

Folks Iowans that are out of the state get to vote too? Who thought this one up? Some consultant watching reruns of Brewster’s Millions (1985)? Although, perhaps this would explain how California has 1.5 million more voters registered than eligible adults living in the state.

My head hurts from trying to decipher that, but honestly it doesn’t matter. The fix is in, Bernie must be beaten. The reason for the top 3 categories is Bernie may win one or two but if someone like… I don’t know, Joe Biden… wins one category, we can call it a split decision. It also plays right into the Democrat power broker’s charges of Sanders overall un-electability. The only reason for this is to try anything possible to blunt his momentum. If you can blow a hole in his victory; hopefully, 8 days later in New Hampshire, voters will pick a different candidate and so on and so forth.

In closing I will say this, the Democrats have handled Bernie Sanders as horribly as possible. They paint him as a wildly out of touch, crazy person, in the same vein that the GOP tried to do with Trump. Trump, like Bernie, both have crazed, very loyal followers and who, in my estimation, will be sitting this election out in November if they view any sense of unfairness in the process. Sanders hates billionaires and corporations, in the same way Trump hates career politicians. The DNC never learned their lesson from the last election and continues to play delegate games, lest we here remind you of the West Virginia primary? In some cases nominating a wild candidate is not always a horrible idea.

Look at Trump. The establishment GOP is literally in shambles. The media is proving what Levin, Limbaugh, and O’Reilly said all along. The apple cart was rocked, the stock market is way up, job numbers are way up, investment in our country is up; a Trump Presidency seems to be working well to me.

However look at what needed to happen for the GOP to get Trump in the White House; a failed President W. Bush, a horrific military moderate John McCain, and then a bigger flop, Mitt “Wall Street Man/moderate” Romney. Sadly the Democrats seem to want to push the Sanders people away without giving them a chance.

Just follow me for a minute here. Democrats nominate Sanders, he goes on to lose bad to Trump, handing the house back to the GOP, the Senate may or may not get redder, and the suburbs would crush the Democrat Party. Then the party can effectively say socialism does not work in our party, basically eliminating the Warren/Sanders/AOC wing. Also it gives rise to who I think your best chance of winning in 2024 is….Gavin Newsome.

Think about it for a minute before you get too upset. The GOP has a very thin bench and Mike Pence is not going to be welcomed as part of the Trump coalition. Heck, he barely moves the needle for a Trump backer like myself. Cruz/Rubio/Paul… or another Bush? Who knows? Democrats, look deeply at your candidates this cycle. The Democrat field is comparable to the GOP circa 2012. Warren/Sanders are wild crazy socialist types. Biden is imploding right in your face, Booty Judge is a small town mayor who has no shot. Bloomberg and Steyer are a couple billionaires in a Party that hates them. Take my advice, nominate Bernie. Take your lumps and move on to 2024 and Gavin. Go against my advice at your own peril. Sanders looks ready to “Bern” it down, and may well nuke the entire Party and start a Third Reich, oops, I mean Party. Take your chances with Bernie or prepare for an insurrection in your ranks.

*Editor’s Note: Bill Clinton reportedly has fathered other children; specifically, a son named Danny Williams. Clinton has refused a DNA test for paternity. Given Clinton’s reckless behavior with females, not his wife, the idea that he fathered an African-American child in Arkansas is within the realm of possibility. There is no confirmation whether this is why LeBron James declared Bill Clinton “The first black president.”