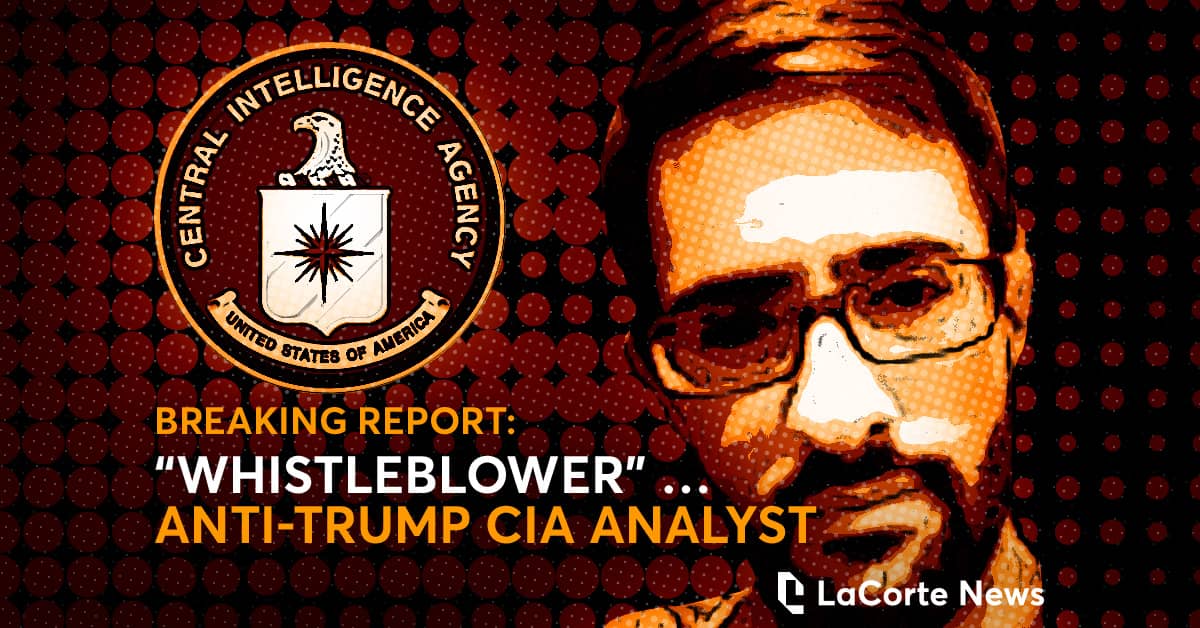 The conventional wisdom is that the veil between this reality and another is somehow supposed to be thinnest over the next few hours. On the day that many celebrate phantoms, ghosts, and other apparitions, our illustrious public servants in Washington have decided to play the swamp version of trick or treat.

Personally, I think we are seeing dead people pretending to be something they’re not. Anyway, Democrats, the Party of the dead, have decided to put all their electoral eggs in the impeachment basket without actually voting to impeach. Thus they will be playing subpoena trick or treat with anyone that might advance version 2.0 (two point oh) of the witch hunt to overturn the 2016 election.

But while they are high fiving each other on this pyric and partisan victory, the wheels have quietly come off of the whistleblower bus. Not that CNN or MSNBC will report it, but the mythical whistleblower has been outed. Behold Eric Ciaramella (pronounced char-a-MEL-ah).

Ciaramella is a holdover from the Obama administration and a registered Democrat. He’s been accused of leaking like crazy. He worked with Joe Biden, he’s a vocal critic of President Trump, and he invited a DNC operative inside the White House to attend meetings. He also helped instigate the investigation into Russia collusion. So, of course, Democrats would believe his second-hand complaint about President Trump’s phone conversation with Ukranian President Zelensky over the actual transcript of the call itself.

The report claims that federal records show Ciaramella attended a state luncheon with Joe Biden’s office back in October 2016. You’ll never guess who else was there? Former FBI Director James Comey and former National Intelligence Director James Clapper. You can’t make this stuff up. The report says it was strange for Ciaramella, a relatively low-level GS-13 federal employee, to have been there. And it describes Ciaramella’s invitation as “unusual,” saying it “signaled he was politically connected inside the Obama White House.”

For a town that leaks like a sieve, Washington has done an astonishingly effective job keeping from the American public the name of the anonymous “whistleblower” who triggered impeachment proceedings against President Trump — even though his identity is an open secret inside the Beltway.

More than two months after the official filed his complaint, pretty much all that’s known publicly about him is that he is a CIA analyst who at one point was detailed to the White House and is now back working at the CIA.

But the name of a government official fitting that description — Eric Ciaramella — has been raised privately in impeachment depositions, according to officials with direct knowledge of the proceedings, as well as in at least one open hearing held by a House committee not involved in the impeachment inquiry. Fearing their anonymous witness could be exposed, Democrats this week blocked Republicans from asking more questions about him and intend to redact his name from all deposition transcripts.

“Everyone knows who he is. CNN knows. The Washington Post knows. The New York Times knows. Congress knows. The White House knows. Even the president knows who he is,” said Fred Fleitz, a former CIA analyst and national security adviser to Trump, who has fielded dozens of calls from the media.

Yet a rare hush has swept across the Potomac. The usually gossipy nation’s capital remains uncharacteristically — and curiously — mum, especially considering the magnitude of this story, only the fourth presidential impeachment inquiry in U.S. history.

The official added that it soon became clear among NSC staff that Ciaramella opposed the new Republican president’s foreign policies. “My recollection of Eric is that he was very smart and very passionate, particularly about Ukraine and Russia. That was his thing – Ukraine,” he said. “He didn’t exactly hide his passion with respect to what he thought was the right thing to do with Ukraine and Russia, and his views were at odds with the president’s policies.”

“So I wouldn’t be surprised if he was the whistleblower,” the official said.

The Beltway’s ‘Whistleblower’ Furor Obsesses Over One Name

Eric Ciaramella is the posterchild of everything wrong with Washington yet somehow he fancies himself to be the real life Jack Ryan.

Hey Eric, remember the opening credits for Mission Impossible where they say, “If you are ever killed or captured, the Secretary will disavow any knowledge of your actions.” You might take that counsel to heart because when your usefulness is over to Congressional Democrats so is your shelf life. My advice to you is if you get a card or package from Nancy Pelosi (or Ted Kaczynski) don’t open it.

Lastly, even though today is Hillary’s birthday, if she knocks at your door tonight don’t open or we’ll never see you again.