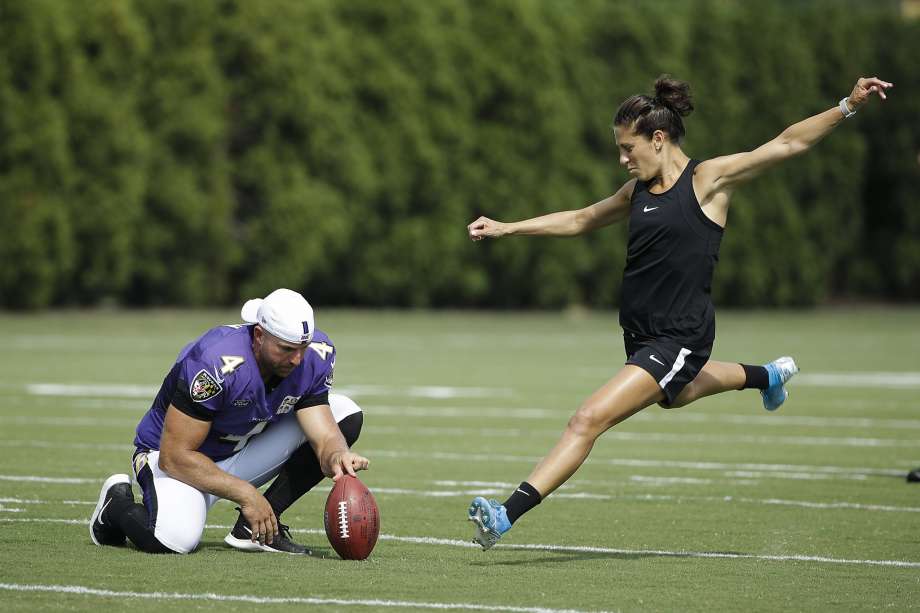 In case you missed it, last week USWNT soccer player Carli Lloyd was invited to a joint practice between the Eagles and Ravens, two NFL teams. During the practice Lloyd went out and kicked a few 55 yard field goals and made them…which is saying a lot as offseason kicking is through a much smaller goal post than used during the regular season. It went viral and started rumors she could play for an NFL team, and as recent as today, she claims a team offered her a chance to kick in a game Thursday.

Okay, let’s snap back to reality for a minute here folks and get serious.

But first let me throw this out there, it’s very cool she had her moment. At 37 years of age, she is in the twilight of her soccer career as witnessed by her being a substitute during the World Cup. Her being able to drill a kick like she did is awesome because it was a no-win situation. Hear me out, she made the kick, and she went viral, a couple Ravens players even say she should get a try-out. Flip side, she misses the kick and all the alpha male types call out “stick to the kitchen” “it’s a man’s game” etc., etc. You know the type. But she made the kick the offers apparently have come in…and Lloyd is considering trying out next year in a real game. Big mistake if she takes them up, take it from me, I played in High School.

What she was doing was akin to going to a local high school or junior college and while wearing athletic attire kicking from the 45 (the end zone adds 10 yards) against air. Folks it’s one thing to kick field goals wearing soccer cleats, gym shorts, a sports bra and that’s it. I will allow fellow writer, The Troll, to speculate on whether or what type of underwear she was wearing…however, her being married means he should just move on or keep longing for Hope Hicks. The NFL requires players to wear football cleats (ask any of us, there is a big difference) shoulder pads (try wailing your arms out like she does when she was kicking…you can’t). In addition you must wear a girdle consisting of pads on both hips, and a tail bone pad, now you can have smaller pads but they must be worn, adding another difference to her normal uniform. She would not have to wear thigh or knee pads, since the kickers typically don’t. She would have to wear a helmet impeding her vision as well. She also took about 5 steps to kick, in the NFL you get about 2…it makes a difference. Also she will be kicking while facing 11 guys trying to block the kick.

It’s a safety issue more than a gender issue. This was even pointed out by Keenan Allen who plays for the Chargers, what happens if the kick is blocked? Remember kicking in the preseason means you are playing against people trying to fight for a couple open slots on the roster, not a bunch of laid back starters going through the motions. I hate to say this but I would take bets one or two players intentionally try to “blow her up” to just send a message to all females. When a kick is blocked, you cannot just get out of the way…more players have been injured in the outskirts of the play or pile than in the pile. Think those guys want a girl to score on them? A message would be sent.

In short, Carli you have had a great career and in my opinion you are an excellent role model for all young women in this country. Not to mention you called out your pink haired, looney teammate who kneeled for the national anthem. Carli, you and any women who feels they can hang, are more than welcome to kick back and if the coaches allow you, sure take a few kicks during practice. But kicking in a game situation would very likely result in serious injuries and possibly debilitating ones. My thoughts about your attractiveness aside (you’re very good looking), use your platform as a world champion and keep speaking your mind about things you care about. You had a great few moments in the spotlight, but when your friends tell you most NFL kickers play into their 40s they have also been training for this their entire life, you just started. Painkillers and steroids are also rampant in the NFL and most of those guys are hawked-up to the point they cannot think straight. Your NFL dreams may get crushed before they start. Think about it.