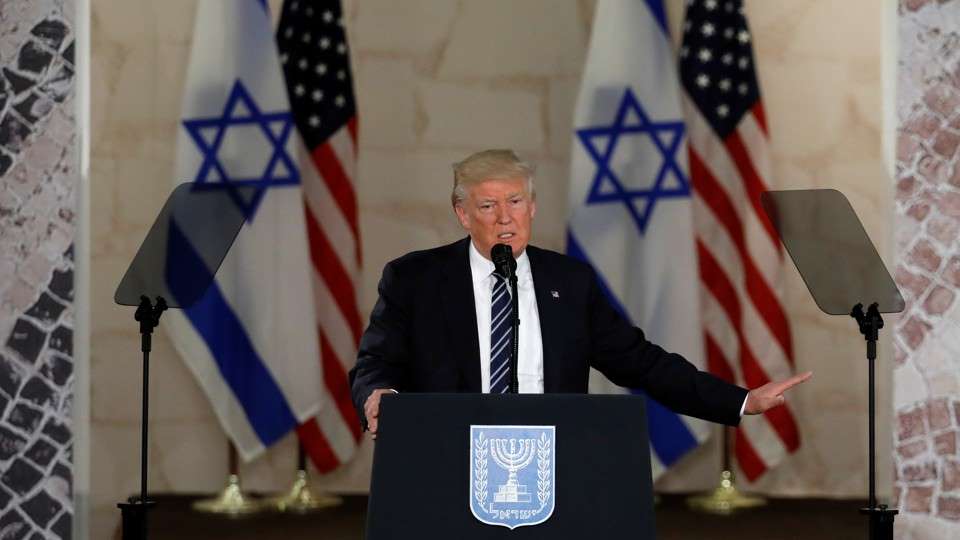 Only in a world where wrong is right and up is down could anyone believe that Trump is bad for Israel but that’s the latest claim of smoldering fecal matter published by The Atlantic.

Please note the fact claims of the author in these paragraphs.

The upshot is that Jewish organizations have lost control of the narrative on Israel. Trump’s actions and statements about Jews and Israel have little to do with the Jewish people—they reflect the mode and priorities of his largely Christian, right-wing base. In practice, Washington’s bipartisan consensus on Israel mostly remains intact, but the story about Israel has changed radically. Jews have become characters in a larger political drama over Israel and anti-Semitism, two of the issues they have historically cared about most. The endless cycles of outrage are not meant to benefit Jews, and they’re not really about Jews.

Trump, in particular, has changed the bipartisan playbook on Israel. The president repeatedly singles out Representatives Rashida Tlaib of Michigan and Ilhan Omar of Minnesota, who have been critical of Israel and were recently barred from entering the country at Trump’s urging. When Trump says these women hate Israel, hate Jews, and are anti-Semites, that gives permission to “the president’s people to say, ‘We don’t care about traditional ways of approaching the U.S.-Israel relationship,’” Solow said. “It also frees up all the president’s opponents in the Jewish community to say, ‘You know what? All the rules have changed.’” As a result, politically conservative and progressive Jews, who might have once found common ground on the Israel issue, are constantly at one another’s throats.

President Trump is right to go after the haters of Israel but when he defends the Jewish state, Liberal Jews are somehow offended. Like Trump, I don’t get it. The Democrats have thrown the Jews overboard and as long as the they remain Liberals first and Jews second, the Democrats will let them have a seat at the table…for now.

Folks, the followers of Islam were brought into this country by President Obama in the millions, not for the purpose of finding a better life in America, but to colonize our nation and expand the caliphate. Everywhere you turn, Liberal places are allowing special rules and practices to accommodate the worshippers of Allah. Liberals are afraid of them.

Please don’t get me wrong, I favor anyone from anywhere coming to the United States, but only those that want to be Americans. If they want to turn America into a place like the third world hellhole, they came from then go home. If you didn’t come here for freedom—religious and economic—then stay home.

Truth is the Liberals are using the people who practice Islam as a way to teardown the beliefs and institutions derived from Christianity; ironically, Christianity and Western Culture are the only thing that can stop the spread of Islam.

Liberals think the enemy of my enemy is my friend but the analogy they should really be concerned with is the one about giving the scorpion a ride across the flooded river or in this case Atlantic Ocean. The uneasy alliance they have made with Islam will—if they ever succeed—be their undoing.

Trump is pointing out that Jew haters are allowed to spew their hatred and the Democrat leadership is silent. Rashida Tlaib of Michigan and Ilhan Omar of Minnesota are Democrats, not only in good standing but along with the other two, are the new face of the Democrat Party. Nancy Pelosi may be Speaker until they carry her out of the House Chambers feet first but she in not running the show. Nancy is just the crazy aunt in the basement.

Dear Nancy, the generation coming up behind you believes all that crap you have been spewing since you guys took over the Party that fateful summer in Chicago back in 1972. Funny, you are now the stale generation of out of touch leaders. How do you like being replaced by younger and more Leftist children. Call it Karma or what goes around, but your goose is cooked.

Trump may be upsetting the traditional apple cart of Jewish folks trying to play both sides of the aisle (a lament of this article quoted above) but the truth is those days were over when Obama took-over the reins of power a decade ago.

If Trump is guilty of anything concerning the Jews and Israel, it is this, choose this day whom you will follow, one Party leads to life and the other to your destruction. Or as Bob Dylan said it many years ago, “When you gonna wake-up?”

Trump is right to defend Israel. Trump is right to attack Tlaib and Omar. Sadly, Nancy Pelosi has put herself in a box that to chasten these two racist idiots will make her appear to agree with Trump and she can’t have that; it would be her undoing. Perish the thought that the adults would discipline the children. If Nancy slapped down these two, it would open up a world where both Parties might work together, and the Democrats have so poisoned the well (or swamp if you prefer) that they can’t have that be an outcome. Better to get rid of Trump than do their jobs.

Trump is right to attack these two babes. They are friends of terrorists and murders and the hate they spread is a deadly toxin. The Democrats won’t clean-up their own House and Trump is just pointing that out. The only conclusion that rational people can draw is that the Democrats must really agree with Tlaib and Omar. How is he the racist by pointing it out?