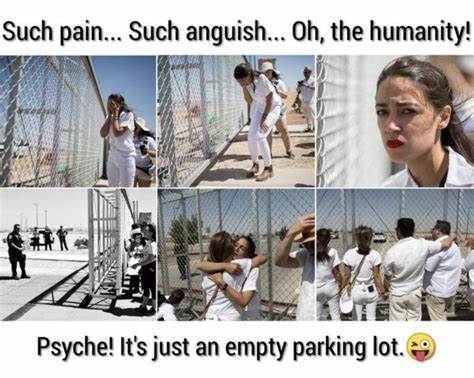 I’m tired hearing about kids in cages. Frankly, it’s a very American thing to do. It’s so commonplace that folks just accept it as normal. Here’s some examples:

We separate kids from their parents and keep them in cages every Monday thru Friday from about 8 AM to 3 PM about nine months out of the year. It’s called school. Oh, you think that’s being harsh to say that? Ok, how do said children or parents gain access to the facility? They enter thru gates and checkpoints and while doing so may be subject to random inspections and metal detectors too. During school times many campuses have police present or on call to protect the site and civilian safety monitors patrol the grounds—especially at recess—to prevent unauthorized crossing of perimeter fencing.

For many parents, school is often just a government provided babysitter that warehouses children while parents are otherwise occupied. Many parents rejoice that the government requires that they are separated from their children on a regular basis. Parents who don’t agree are often visited by government agents if they don’t comply with this separation.

At my son’s school, the gates are locked and signs directing me to his location are frequently wrong. I often joke (lament might be a better word) with other parents that the school needs an app to locate your child. I can’t tell you how many times it’s taken me 10 to 15 minutes of running around from place to place to locate my youngster and extract him from his campus.

Other examples of forced separation abound. Heck even the local health club has gotten in on the action. They don’t allow children to be with their parents, instead forcing them not to follow their folks healthy example but sit in a separate, guarded area with, yep, a fence around it—completed with barbed wire.

Please note that the barbed wire in photo is to keep kids from escaping not directed to keep people out of the children’s area.

Caging children and separating them from their folks is not always a bad thing. Depending on the circumstances, many folks just consider it part of daily life. I submit for your consideration that if it weren’t for lawyers and criminals running free on our streets that there would be a lot less fences separating people from each other.

If you haven’t been out of state much, it might surprise you that in many neighborhoods, houses are not separated by any type of fencing. Whole blocks have backyards as one contiguous grass area with nothing but swing sets and play structures as far as the eye can see. Children have whole subdivisions as their play area.

When folks enter our country in violation of the law, they have committed a crime. This is no secret. They know it is wrong but purposefully do it anyways. When they get caught there can be consequences. It seems that many are willing to take that risk. Those arresting them will segregate people as they see fit, often for health and safety reasons. If children are separated then I have to believe there is a good reason.

The bottom line is that the current controversy about kids in cages is a contrived, emotional argument. It was perfectly fine when a Democrat President was in charge. I know of no photos of this alleged phenomenon since Trump took office. Not to say that one may not exist but the ones recently put out by Congressional Democrats to publicize their hearings on this issue were all removed from their websites and Twitter accounts as each was proven to be photographed when Obama was President. Congressional Democrats have yet to put forward one photo created after the current Administration took over. Funny how that works.