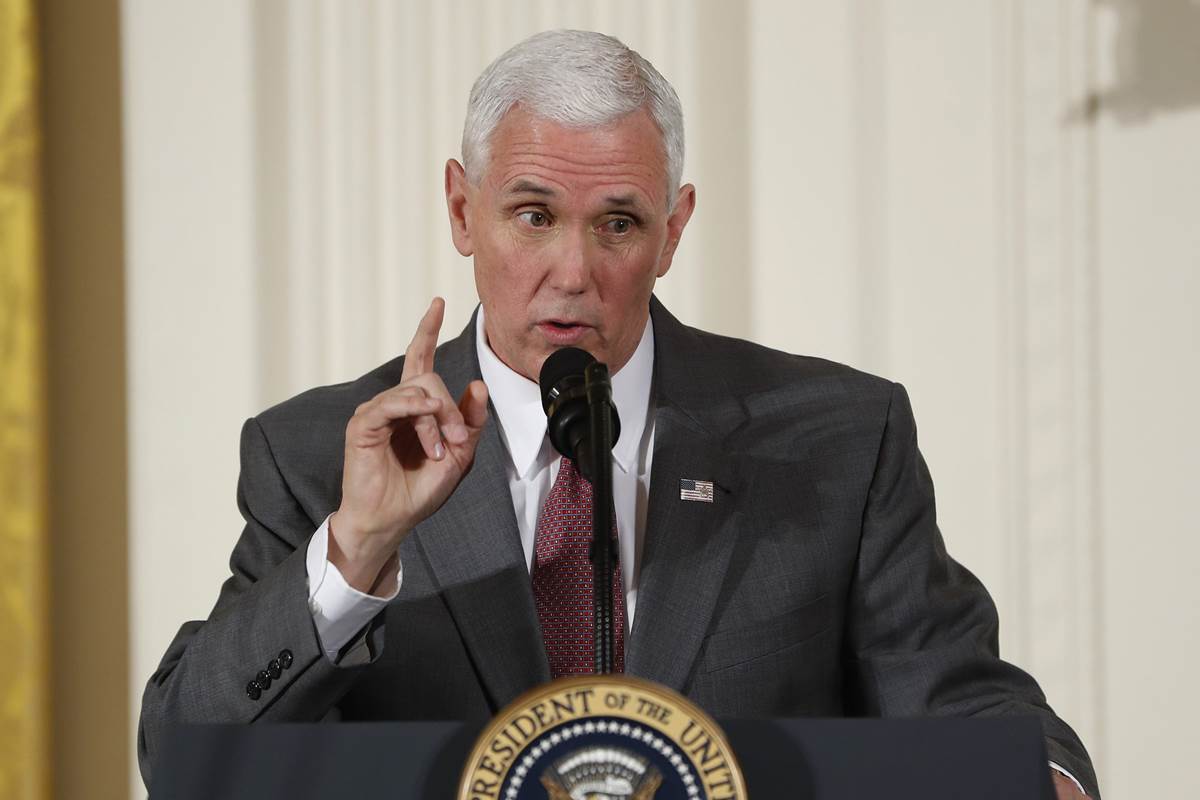 There is a Democrat Presidential wannabee that has spent the last several days attacking Vice President Mike Pence because Pence is an Evangelical Christian. Pence has done nothing to merit this attack but the mere fact that he exists is enough to set this guy off.

South Bend Mayor Pete Buttigieg, a 2020 presidential hopeful, took direct shots at Vice President Mike Pence Sunday regarding his sexuality, telling the vice president his marriage to a man has moved him “closer to God.”

“That’s the thing I wish the Mike Pences of the world would understand: That if you have a problem with who I am, your quarrel is not with me. Your quarrel, sir, is with my creator,” the Indiana Democrat said during a speech at the LGBTQ Victory Fund’s annual brunch.

Link: Democrat Buttigieg to Mike Pence: if you oppose my sexuality, ‘your quarrel, sir, is with my creator’

If you dig deeper into the story you will discover that Pence and this guy have had a cordial working relationship in the past when Pence was governor of Indiana. This guy is attacking Pence solely to elevate his profile within Democrat circles and fundraise in the process.

I’m going to defend Pence but not as politely as the VP would. You see, I’ve got a dog in this hunt and I’m tired of the bullying from the “rainbow people”; especially, when they try to justify themselves by using the Bible.

Lest you think I’m picking this fight, try this from the fake news outlet, MSNBC.

Buttigieg, most recently, targeted Pence at a fundraiser for the LGBTQ organization Victory Fund on Sunday.

“If me being gay was a choice, it was a choice that was made far, far above my pay grade,” Buttigieg said. “And that’s the thing I wish the Mike Pences of the world would understand. That if you got a problem with who I am, your problem is not with me — your quarrel, sir, is with my creator.”

Buttigieg’s comments came hours after he made critical comments about evangelical voters’ support of President Donald Trump during an appearance on “Meet The Press.”

“It’s something that really frustrates me because the hypocrisy is unbelievable,” Buttigieg said. “Here you have somebody who not only acts in a way that is not consistent with anything that I hear in scripture in church.“

Mayor Pete is an openly homosexual guy that claims to be a Christian in good standing because he is a member of the Episcopal Church, an ecclesiastical body that endorses his sexual preference.

I don’t know about you, but I am reluctant to get any biblical advice on sexuality from any guy whose last name begins with Butt… however, let’s look at the money quotes in the above citations.

Claim #1 Homosexuality is God’s Will

Mayor Pete says in essence, “God made me this way so your problem is with Him.” I think this is a fair summary of his position.

There are two responses that I can make with the statement, I can agree with the mayor or disagree with him but either way he is wrong.

Argument 1: God Made Me This Way

God makes some people to be vessels of wrath. They are made for destruction.

Therefore hath he mercy on whom he will have mercy, and whom he will he hardeneth.
Thou wilt say then unto me, Why doth he yet find fault? For who hath resisted his will?
Nay but, O man, who art thou that repliest against God? Shall the thing formed say to him that formed it, Why hast thou made me thus?
Hath not the potter power over the clay, of the same lump to make one vessel unto honour, and another unto dishonor?
What if God, willing to shew his wrath, and to make his power known, endured with much longsuffering the vessels of wrath fitted to destruction:
And that he might make known the riches of his glory on the vessels of mercy, which he had afore prepared unto glory,
Even us, whom he hath called, not of the Jews only, but also of the Gentiles?

Nevertheless the foundation of God standeth sure, having this seal, The Lord knoweth them that are his. And, Let every one that nameth the name of Christ depart from iniquity.
But in a great house there are not only vessels of gold and of silver, but also of wood and of earth; and some to honour, and some to dishonor.
If a man therefore purge himself from these, he shall be a vessel unto honour, sanctified, and meet for the master’s use, and prepared unto every good work.
Flee also youthful lusts: but follow righteousness, faith, charity, peace, with them that call on the Lord out of a pure heart.
But foolish and unlearned questions avoid, knowing that they do gender strifes.
And the servant of the Lord must not strive; but be gentle unto all men, apt to teach, patient,
In meekness instructing those that oppose themselves; if God peradventure will give them repentance to the acknowledging of the truth;
And that they may recover themselves out of the snare of the devil, who are taken captive by him at his will.

So if Mayor Pete believes that God made him that way, as a vessel of destruction, he is biblically correct.

For the wrath of God is revealed from heaven against all ungodliness and unrighteousness of men, who hold the truth in unrighteousness;
Because that which may be known of God is manifest in them; for God hath shewed it unto them.
For the invisible things of him from the creation of the world are clearly seen, being understood by the things that are made, even his eternal power and Godhead; so that they are without excuse:
Because that, when they knew God, they glorified him not as God, neither were thankful; but became vain in their imaginations, and their foolish heart was darkened.
Professing themselves to be wise, they became fools,
And changed the glory of the uncorruptible God into an image made like to corruptible man, and to birds, and fourfooted beasts, and creeping things.
Wherefore God also gave them up to uncleanness through the lusts of their own hearts, to dishonour their own bodies between themselves: Who changed the truth of God into a lie, and worshipped and served the creature more than the Creator, who is blessed for ever. Amen.
For this cause God gave them up unto vile affections: for even their women did change the natural use into that which is against nature:
And likewise also the men, leaving the natural use of the woman, burned in their lust one toward another; men with men working that which is unseemly, and receiving in themselves that recompence of their error which was meet.
And even as they did not like to retain God in their knowledge, God gave them over to a reprobate mind, to do those things which are not convenient;
Being filled with all unrighteousness, fornication, wickedness, covetousness, maliciousness; full of envy, murder, debate, deceit, malignity; whisperers,
Backbiters, haters of God, despiteful, proud, boasters, inventors of evil things, disobedient to parents,
Without understanding, covenantbreakers, without natural affection, implacable, unmerciful:
Who knowing the judgment of God, that they which commit such things are worthy of death, not only do the same, but have pleasure in them that do them.

So whether Mayor Pete was made that way by God or chose the lifestyle himself, he is on the receiving end of God’s wrath, a vessel fit for destruction.

Pete claims, Mike Pence “acts in a way that is not consistent with anything that I hear in scripture in church.” As stated before, his honor is a practicing Episcopal.

Christianity is defined in terms of the historic Creeds; these are Apostles, Nicene, and Athanasian.

Think of Jesus as the Shepherd and Christians as his flock. The Creeds are the fence line surrounding the pasture. Any denial of the Creeds makes that person not a Christian and thus outside the faith.

Sadly, the Episcopal and Methodist churches in the United States have left “the faith which was once delivered unto the saints.” (Jude 1:3) Their clergy no long must to affirm that God is Father, Son, and Holy Ghost; the bodily resurrection; the incarnation; six day creation; biblical marriage; sin; Jesus as the only way to God; etc.

So what mayor Pete might hear in church could conflict with what Mike Pence says, does, or believes. Pete is not a member of the Christian Church but a heretical, non-Christian sect. Mike Pence is not the standard, God’s Word is.

I am not saying that a homosexual cannot be saved. The Apostle Paul writes,

Know ye not that the unrighteous shall not inherit the kingdom of God? Be not deceived: neither fornicators, nor idolaters, nor adulterers, nor effeminate, nor abusers of themselves with mankind,
Nor thieves, nor covetous, nor drunkards, nor revilers, nor extortioners, shall inherit the kingdom of God.
And such were some of you: but ye are washed, but ye are sanctified, but ye are justified in the name of the Lord Jesus, and by the Spirit of our God.

A homosexual will cease to be one once they come to Christ. They will be a “new creature: old things are passed away.” (2 Cor 5:17).

What shall we say then? Shall we continue in sin, that grace may abound?
God forbid. How shall we, that are dead to sin, live any longer therein?

Mayor Pete is not really a believer. If he were then he would stop celebrating his sin and repent. Instead he claims God is honored by his sinning that grace may abound. Thus he turns Scripture on its head.

Mayor Pete may rage all he wants but his moral and ethical problem is with his sin. Pete needs to repent or perish. Unless God intervenes, he is destined to be a vessel of dishonor, fit only for destruction.