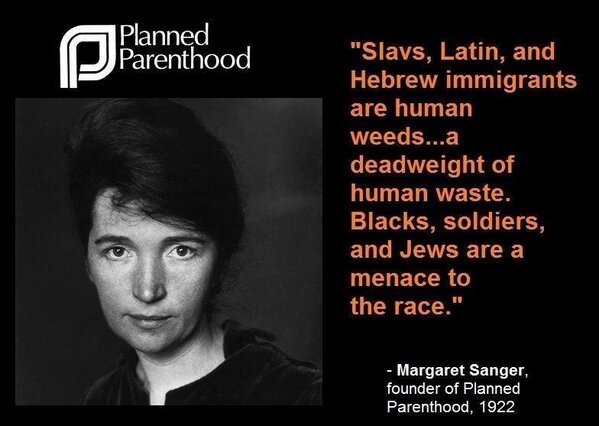 Given: Leftists believe that Evolution is true; therefore, the world is governed by “survival of the fittest.”
Corollary: Some humans are superior to others.

Thus, those that think they are fit (Leftist Elites) have the right to decide what is best for everyone else.

Three news stories in the last week indicate the stronghold that Eugenics has in the United States.

Before getting into the stories, it would be worthwhile to define eugenics for those of you with public school or inferior private school educations.

Eugenics is “The science of improving a population by controlled breeding to increase the occurrence of desirable heritable characteristics.”

Given Darwin’s belief is almost universally accepted as true—except for those of us that are Orthodox Christians—it should be no surprise that folks believe that some men are superior to others. The sad part is that people that should know better have fallen for this anti-biblical lie from hell. This has been a purposeful deception.

Topic #1 Black Folks Support Genocide Of Their Own Race

A new Barna Group poll commissioned by the pro-life movie “Unplanned” found that blacks support tax subsidies for abortion giant Planned Parenthood more than any other group.
The irony, the survey sponsor said, is that Planned Parenthood founder Margaret Sanger was an advocate of eugenics and promoted birth control among black communities.
Overall, 41 percent favored tax subsidies, and 39 percent oppose them. But among blacks, 53 percent favor the subsidies, and only 20 percent oppose them.

The history of Sanger and her advocacy for birth control in black communities is well-documented.
HUD Secretary Dr. Ben Carson has charged Sanger “was trying to eliminate black people. … That was the whole purpose of it.”
Arina Grossu of the Center for Human Dignity in Washington, said Sanger “shaped the eugenics movement in America and beyond in the 1930s and 1940s.”
“Her views and those of her peers in the movement contributed to compulsory sterilization laws in 30 U.S. states that resulted in more than 60,000 sterilizations of vulnerable people, including people she considered ‘feeble-minded,’ ‘idiots’ and ‘morons,’” Grossu found.
“She even presented at a Ku Klux Klan rally in 1926 in Silver Lake, N.J. She recounted this event in her autobiography: ‘I accepted an invitation to talk to the women’s branch of the Ku Klux Klan. … I saw through the door dim figures parading with banners and illuminated crosses. … I was escorted to the platform, was introduced, and began to speak. … In the end, through simple illustrations I believed I had accomplished my purpose.’”
Sanger once said, “The main objects of the Population Congress would be to apply a stern and rigid policy of sterilization and segregation to that grade of population whose progeny is tainted, or whose inheritance is such that objectionable traits may be transmitted to offspring[;] to give certain dysgenic groups in our population their choice of segregation or sterilization.”
Grossu noted that even now, nearly 80 percent of Planned Parenthood’s surgical abortion facilities are located within walking distance of black or Hispanic communities.
And she pointed to figures from the Centers for Disease Control and Prevention from 2007 to 2010 showing that more than one third of all abortions destroyed unborn black babies. That’s even though black Americans make up only 13 percent of the population.

In early January 2018, along some of the main thoroughfares in Greater Cleveland, billboards that espoused the “benefits” of abortion began popping up. The signs, placed by Ohio’s largest abortion business, Preterm, carried messages such as “Abortion is sacred,” “Abortion is a family value,” “Abortion is safer than childbirth” and “Abortion is a blessing.” It was all part of the group’s “Abortion is” campaign to reduce abortion stigma.
The billboards stood in some of Cleveland’s poorest neighborhoods, their bold and ironic claims plainly contradicting Scriptural teaching about the inherent value of human beings made in God’s image (Genesis 1:27; Psalm 139:13-15).
These billboards caught the attention of Franklin Graham. He posted on Facebook, Jan. 4, 2018: “God says, ‘Woe to those who call evil good and good evil.’ That’s exactly what an abortion business in Ohio is doing. … These are all lies. Here’s a billboard for them—‘Abortion is evil, because it’s murder.’ Pray that America will wake up to the tragedy of children being killed through abortion every day in this nation.”
Long before the campaign launched, black pro-life groups and civil rights leaders had been exposing the chilling aspect of such morbid propaganda efforts: The abortion industry disproportionately targets African-Americans. In fact, many black pro-life leaders have a bold term for it: black genocide.

Nationally, some 36 percent of abortions are performed on African-American women, CDC figures show, while the female population is only 13 percent black. In New York City, the abortion rate is 3.7 times higher among black mothers than white mothers.
Bomberger’s first billboard campaign featured 60 signs in the Atlanta area in 2012 bearing the message “Black Children Are an Endangered Species.” He says he told a New York Times reporter who questioned use of the term genocide, that by United Nations definitions, the practice of abortion in the black community meets four of the U.N.’s five conditions for genocide.
Those conditions are: “Killing members of the group; causing serious bodily or mental harm to members of the group; deliberately inflicting on the group conditions of life calculated to bring about its physical destruction in whole or in part; imposing measures intended to prevent births within the group; [and] forcibly transferring children of the group to another group.”
Of those, only the last isn’t applicable, Bomberger says.
“I don’t know how else to describe it,” he says. “How do you describe it when in New York City, more black babies are aborted than are born?”

What I believe with little empirical doubt is that the New York Legislature has just legalized conscious fetal murder on a potentially very large scale, WITHOUT competent medical supervision. The latter point strongly suggests that they don’t want to hear the truth from highly qualified MD’s.
This is no longer a theoretical debate.
This is legalized genocide.

The measure, which Gov. Andrew M. Cuomo quickly signed into law Tuesday night, was pushed through by Democrats who now control both legislative houses. The Senate passed it 38-24. In the Assembly, it passed by a 92-47 margin.
In the face of calls at the federal level to weaken abortion rights, the bill maintains abortions as legal within 24 weeks of the start of a pregnancy – “or at any time when necessary to protect a woman’s life or health.’’ Late-term abortions had previously been authorized under state law if they meant saving the life of a woman.

Please note the weasel word “health” in this quote: “or at any time when necessary to protect a woman’s life or health.’’

Per US Supreme Court case Doe v Bolton, health of mother was defined as mental health which has been interpreted as convenience. If mother doesn’t want baby then she doesn’t have to give birth to the child because this could cause undue mental and/or physical strain on her. This case was released same day as Roe v Wade in 1973 and was coupled with Roe to allow abortion on demand.

Physician assistants will be permitted to also carry out surgical abortions and licensed midwives and nurse practitioners can do nonsurgical procedures using medications if they are “acting within his or her lawful scope of practice,” according to the legislation.

Topic #3 Infanticide Is What We Want Now

Virginia Democrat Kathy Tran’s bill would allow abortion even when mother is about to give birth for mental health reasons.

Todd Gilbert, the Republican House majority leader, questioned Tran about the bill during a hearing Monday. He asked Tran if a woman who has physical signs she is about to give birth could request an abortion if a physician said it could impair her “mental health.”
“Where it’s obvious that a woman is about to give birth. She has physical signs that she is about to give birth. Would that still be a point at which she could request an abortion if she was so-certified — she’s dilating,” he asked.
“Mr. Chairman, that would be … a decision that the doctor, the physician and the woman would make at that point,” Tran replied.
“I understand that,” Gilbert replied. “I’m asking if your bill allows that.”
Tran replied: “My bill would allow that, yes.”

Those familiar with so called bioethicist, Peter Singer, would not be surprised at such comments. For decades, Singer has advocated subjecting newborn children to a battery of tests to decide if a child should be declared “human’ otherwise they can be killed up to age two years without any repercussions.

Eugenics is an integral part of the ideology of the Democrat Party. Sadly, many that are the targets of extermination are happy to support those that want to exterminate them. Democrats act on the basis of your skin color not the content of your character. This is the reason they use identity politics. They want to limit and control people. Their promise of security in exchange for yielding liberty is false.

In case you needed a reminder that Jesus isn’t welcome in the Democrat Party besides the fact they want to eliminate God from the oath how is abortion compatible with His words:

“The King will reply, ‘Truly I tell you, whatever you did for one of the least of these brothers and sisters of mine, you did for me.’”
Matthew 25:40