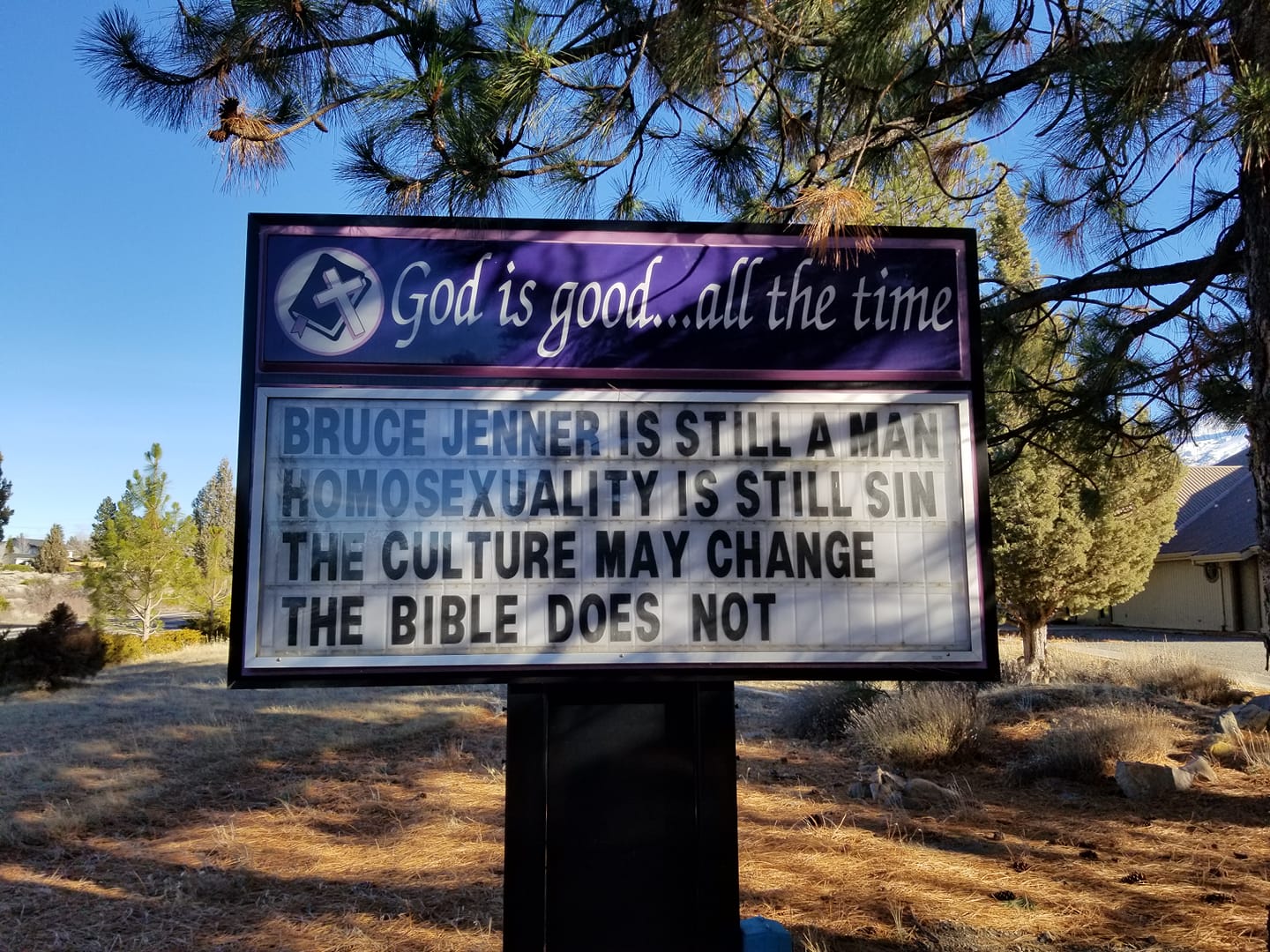 On my old version of my blog, I used to have the following quotation from Martin Luther:

If I profess with the loudest voice and clearest exposition every portion of the truth of God except precisely that little point which the world and the devil are at that moment attacking, I am not confessing Christ, however boldly I may be professing Christ. Where the battle rages, there the loyalty of the soldier is proved, and to be steady on all the battlefield besides, is mere flight and disgrace if he flinches at that point.

If you want to know why the Church in America is so weak and ineffective, just look at the aftermath of the incident that I blogged about a few days ago.

A rural pastor in California put the following on the sign in front of his church:

Some local people that were not church members or as best as I can tell, not self-identified Christians, protested.

The church has lost its saltiness and I fully expect to get as much or more flack from the visible church as I am getting from the world.

If a conservative mountain farming community is no longer a safe place to call sin, sin, then is anywhere in this country still safe for real Christians?

Little did the pastor know that he had preached him last sermon. You see, his congregation abandoned him and cut him loose for “calling a sin, sin.”

Pastor Justin Hoke posted the following on Facebook on Saturday.

As of today, I am no longer the pastor of Trinity Bible Presbyterian Church.
After much prayer and counsel, I have decided that it is best to briefly communicate what has taken place.
I was informed by our other elder that he felt he could no longer follow my lead as Pastor of TBPC.
I was informed that essentially all but one couple in membership would leave the church if I continued as pastor of TBPC.
Our other elder and the couple felt that those who left would likely return if I would leave.
Our other elder was agreeable to stay and assume the pastoral responsibilities.
Therefore it was determined that it would be in the best interest of the local body for us (TBPC and the Hoke family) to part ways.
Update 1/14/19
I would like to add this, I did not want to leave, I did not quit, and I was willing to stay.

Bottom line was the pastor was faithful, but the flock was not. The clergy would not support him, and the congregation abandoned him.

Please note that he was their pastor for seven years and they kicked him to the curb for being right. Let me emphasize that again:

He called people to repentance and as a result got the boot. This brings me back to the quote from Luther who said in essence, if you are right about everything except where the devil is attacking at that moment and flinch on that point your faith is worthless.

Sadly, pastor Hoke’s congregation is the rule and not the exception in much of the modern western church. So next time you want to vent about the stupid pagans and what they are doing, remember that they are acting according to their nature—dead in their trespasses and sin—while we that are claiming to be alive in Christ are often the ones to blame.

Sadly, too many Christians read II Chronicles 7:14 like this:

“If those other people, would call on my name, humble themselves, and pray, and seek my face, and turn from their wicked ways; then will I hear from heaven, and will forgive their sin, and will heal their land.”

Unfortunately for them, this verse in not directed at the pagans in our world and commanding them to repent; instead, it is directed at the Church to repent, humble themselves and pray. Those claiming to be believers have failed in their mission. We need to repent and turn to God and that will heal our nation.

“If my people, which are called by my name, shall humble themselves, and pray, and seek my face, and turn from their wicked ways; then will I hear from heaven, and will forgive their sin, and will heal their land.”

Thanks to, Joe Miller, for making me aware of the update on this tragic situation.