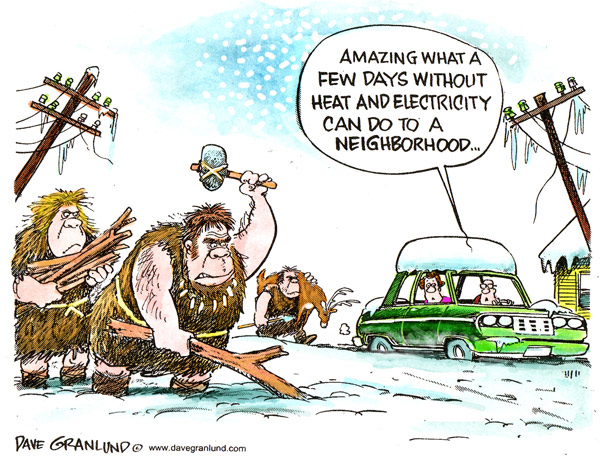 Sunday January 6th, 2019, a date which will live in infamy. At the Johnnie Does residence I was innocently watching the conclusion of the Bears/Eagles game when the lights and all other power devices suddenly stopped working. The time was around 5:00 PM and since our electric utility monopoly recently switched to a time of use billing system, where folks pay higher rates between 5-8pm I figured my utility was doing me a favor.

Soon thereafter I realized the entire block was without power, was this a “rolling blackout?” I immediately called a friend and learned that he was out of power too. I then texted my parents, they live 5 minutes away, their power was on! I was dumbfounded so I went to the SMUD website, it showed no outages…apparently, I was living in the matrix. That or the Russians had hacked the SMUD power outage alert website. I thought death could be imminent since I was without power and Internet service, no one would be aware of my passing, I was experiencing a blackout.

However this blackout was a new experience for Johnnie Does, he is far more accustomed to the alcohol induced blackout. I remember those well from my college days of drinking copious amounts of alcohol, waking up having no clue who she is, or how I got home…oh sorry it’s a PG rated blog.

I hunkered down and waited.

Eventually, rain and wind knocked out power to over 130,000 people. Unable to cook due to a lack of power, I used my laptop to pass some of the time. At around 10:00 my parents called me to see if I was ok and invited me over, not to offer rations or even a place to charge any devices that run on said power, just to do a wellness check.

On my way back to my dwelling, I was furious at the inconvenience caused by the outage. I passed a CVS…this was the perfect opportunity; I contemplated doing what some of the homies do in Los Angeles and loot the place…hopefully I wasn’t the only one with this idea and the selection was not limited to just Vagisil and Monostat.

To my dismay, the lights and power were functioning there, so I ducked my head down and drove home.

I subsided on a diet of brownies, Tostitos tortilla chips and water from the tap. Batteries eventually died, and as a result I turned in to bed early around 11:00. Then I realized, the power outages are broadcast by the radio all over the county to anyone listening, so the bad guys knew where to go to loot! I grabbed my trusty weapon of choice and worked guard duty ‘til 3:30 am, I kept telling myself if anyone comes through the door, shoot ‘em all and let God sort it out! Out of power myself I eventually turned in without having to use said weapon.

I woke up to find that I was still without power…since I live in a “rural area” the priority is very low for restoring my power. I made due, lifted my garage and closed it behind me and headed off to my place of work…commerce continues despite adverse conditions.

Upon arriving at my office, I was greeted by folks offering really dumb suggestions like the following:
Why didn’t you grill your dinner last night? Well hurricane force winds?????
Why didn’t you microwave your dinner? Lack of power may have something to do with it

The power finally came on at around 4:00 the following afternoon, just in time for “peak electricity rates to occur” funny coincidence? I thought, “Get the **** outta here SMUD, that was weak!”

In the afternoon sunlight, my backyard looked like a war zone due to my 9 redwood trees dropping branches like it was going out of style. The only thing I didn’t lose during that blackout was my sanity. I was able to survive, but I will say this; given a choice between the two different types of blackouts: I prefer the alcohol induced one!

This concludes a real life experience of a blackout.