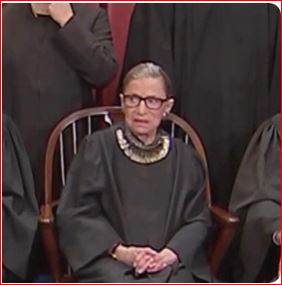 Quite a few people in this country have the IQ of a potted plant, meaning the bane of their existence is to be taken care of by someone else, their owner.  In other cases, you have people–mostly those who write for newspapers–who have the IQ of a piece of meat.

These two wrote an article about Ruth Bader Ginsberg (RBG) giving “side eye” –a sign of disrespect to a colleague of hers, Brett Kavanaugh–in the annual Supreme Court photo.  Jenny Holander and Marie Claire will never win a Pulitzer. Furthermore, I doubt they could ever pass a test that proves their IQ is positive.  The article is a thinly veiled hit piece written by a couple women who knowing very little think they know more than anyone else on this earth.  This is why they cannot find work anywhere else and have to resort to click bait articles.  Kind of ironic, but she is giving “side eye” to Sam Alito, as Brett Kavanaugh is pictured in back over her shoulder…….strange.

Get a load of this quote…..

Don’t get me wrong-I could certainly be seeing what I want to see here, mostly because RBG is a women’s rights icon. Meanwhile, Kavanaugh behaved like a spoiled child when asked about assault allegations at his confirmation hearings and got a spot on the bench anyway. Also, in fairness, RBG has adopted this facial expression in previous SCOTUS shots that did not include Kavanaugh, so there’s that.

Hmm…so I guess Americans no longer have the right to defend themselves in court?  Throw out the Constitution?

Friday is portrait day at the Supreme Court of the United States, and you know what that means-a spot of shade-throwing by Justice Ruth Bader Ginsburg, or so it seems. The November 30 portrait is the first that includes now-Justice Brett Kavanaugh, who replaced Antonin Scalia after a bitter tug-of-war about whether the multiple sexual harassment claims against him (which Kavanaugh denies) should render him ineligible. (Meanwhile, Christine Blasey Ford has only recently been able to return home due to death threats, but I digress.)

So, I guess Kavanaugh replaced Scalia (may he rest in peace) ummmmmmmmmmmmm no Neil Gorsuch did, or maybe I’m just too dumb to believe what I think these people just told me.  Maybe I should ask the Blog Father’s wife who is a teacher about this one?

Good grief! Journalism is dead but wow. You two really are so off the reservation even Elizabeth Warren won’t call you among her tribe.  Maybe you should take up a career with a declining paper like the Sacramento Bee. Their standards were lowered a long time ago and are likely looking for people with IQ’s below that of a slug!  But honestly; thank God you’re employed. I wouldn’t want my hard-earned tax dollars paying you two idiots to stay at home.  However, if you want to go play in traffic, I endorse it, you won’t be missed. Your journalistic skills make you prime candidates for the Darwin Awards because you clearly have nothing worthwhile to contribute to humanity.

Just a quick lesson; feel free to check my stats on this……. Neil Gorsuch replaced Antonin Scalia……Brett Kavanaugh replaced Anthony Kennedy; but since I’m a white male, you think I probably have Mien Kompf and the Communist Manifesto by my bed every night so check with someone else to confirm my facts!