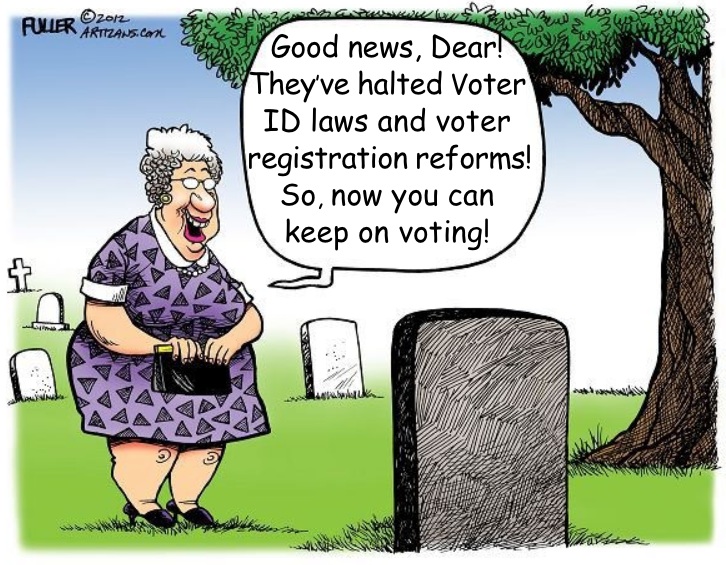 Sacramento County appears to make voter fraud easy. They eliminated traditional polling places, instead mailing ballots to all registered voters in the county. Voters are supposed to return their ballots to a drop center in their community. As my wife and I found out, these drop centers are not manned and nobody is tracking when your ballot is turned in. In a strict sense, there is no effort at any chain-of-custody for ballots. The only proof that anyone has that they voted is a signature on the outside of the ballot envelope and a stack of I Voted stickers on top of the ballot drop box should you choose to get one.

What happens to the ballot once it is returned? In the old days, the signature was checked before the envelope was opened; however, do you really think somebody is checking every signature for 300,000 ballots? The second would be what happens if it doesn’t match the signature on file? Again, in the old days, the ballots were not counted. Furthermore, the voter is never notified that their ballot is not counted or had a problem. If it is a legitimate mistake, too bad. If voter forgets to sign the envelope then what happens?

Color me cynical but I have extra blank ballots at my house every election cycle since this system was implemented. I’m confident that many other folks are experiencing the same situation. I’m sure nobody would ever think to go house to house to collect these extra ballots in exchange for money, food, or in the name of keeping elections honest. Surely, not!

Here are other voting concerns that folks are having this election season:

Los Angeles, California –  The LAPD arrested 3 people on Friday for voter fraud, just latest in a long list of arrests for the charge. The suspects are paying homeless people a dollar or a quarter, or food or cigarettes to forge names on California ballot measures. And it’s been going on for years.

Suspects set up tables on Skid Row where they approach homeless people to gather forged signatures. The California government claims that such situations are “rare.” But according to the LAPD officer who patrols Skid Row, it’s common. So far in 2018, the LAPD has arrested 7 people for felony voter fraud and 4 of those charges were reduced to misdemeanors. Which effectively erases the problem from people’s radar. This is an excuse for Democrats to say that voter fraud is “rare.”

San Francisco reportedly spent $310,000 on a new registration system aimed at getting non-citizens to cast votes in school board elections.

The program resulted in 49 new voters, which turned out to cost the city $6,326 each, The San Francisco Chronicle reported. The paper called the effort “pretty much a bust the first time out.”

Local officials suggest residents who might otherwise consider registering are worried the Trump administration would learn their identities.

San Fran spends $6,300 for each non-citizen voter to sign up

Lest you think California is the only spot experiencing voter issues, remember that everything is bigger in Texas.

When the registered independent went to a recreational center in Grapevine, Texas, last week, he planned to vote for Senate hopeful Beto O’Rourke. The Hart machine offered a fast-tracked option for straight-ticket voters. Martin selected it, expecting the machine to populate an all-Democrat ballot.

“It floored me. My vote showed up on the machine for the wrong senator. Instead of Beto O’Rourke – the Democratic candidate – it said [Republican candidate] Ted Cruz,” he said. After noticing the error, Martin backtracked to the initial screen and manually registered his vote.

The Texas secretary of state has been aware of the issue for at least a week.

An election advisory from Director of Elections Keith Ingram, dated Oct. 23, said: “We have heard from a number of people voting on Hart eSlate machines that when they voted straight ticket, it appeared to them that the machine had changed one or more of their selections to a candidate from a different party. This can be caused by the voter taking keyboard actions before a page has fully appeared on the eSlate, thereby de-selecting the pre-filled selection of that party’s candidate.”

Martin denied misusing the machine. “What is this going to be, another Dade County?” he said, referring to disputed Florida ballots in the 2000 presidential election. “The only vote that counts with national scope is the one being destroyed.”

Marian Schneider, president of Verified Voting, a voting integrity organization, issued a statement Monday in response to reports that voters in the state’s six largest counties experienced problems using the company’s machines. She called for verifiable systems that include a voter-marked paper ballot: “Verified Voting calls on Secretary of State Rolando Pablos to launch a broader and more robust statewide public information effort to advise voters to carefully check their choices as displayed before submitting them. . . . Paper ballots that are retained can be later sampled to check if the software is correctly reporting the voters’ selections. Without such a safeguard, public confidence in elections diminishes.”

The issue, she said, impacts 5.1 million Texas voters, at a minimum.

This isn’t the state’s first problematic run-in with the Hart voter systems, according to Sam Taylor, communications director for Pablos, who confirmed that voters in only five counties had experienced issues with the machines.

During the 2016 election, the agency ran tests on the machines after voters’ choices of presidential candidates were deselected. The problem affects only the first race on the ballot. In 2016, that was the presidential race. This year, it’s the senatorial contest.

A voter fraud investigation in Dallas County continues to deepen with prosecutors asking a judge late last week to impound a “suspicious box” of mail-in ballot applications they believe may be tied to a political candidate in the May election.

Investigators appear to be homing in on the candidate, who they did not name in new court documents but described as a suspect who lives in Grand Prairie. Authorities are also looking into two other suspects who are connected to the candidate and who prosecutors say assisted voters in mailing ballots in envelopes signed with suspected forged signatures. Those votes were rejected from being counted.

The filing Friday by the district attorney’s office revealed new details in a wide-ranging investigation of thousands of suspicious mail-in ballots and ballot applications submitted in West Dallas and Grand Prairie since last year. This year, prosecutors have investigated possible fraud in the handling of more than 1,200 mail-in ballot applications that generated at least 459 ballots from West Dallas, Grand Prairie and parts of Oak Cliff, Assistant District Attorney Andy Chatham said in March.

As the federal government has noted, states are responsible for conducting elections. Due to budget constraints, many voting machines haven’t been updated in years. In 2016 Christopher Famighetti of the Brennan Center for Justice interview told CBS News, “We found that more than 40 states are using voting machines there that are at least 10 years [old].”

This year at the cybersecurity conference Defcon, hackers were able to crack a Diebold voting machine in 15 minutes.

Children as young as 5 will compete to hack election results websites, and DEF CON has partnered with children’s hacking organization r00tz Asylum to award prizes to the first and youngest kids to breach the sites and hack equipment.

Jake Braun, a former White House liaison for the U.S. Department of Homeland Security, told ABC News that the conference decided to invite young hackers because it would be a “waste of time” to demonstrate that cybersecurity experts can hack election results reporting sites.

“These websites are so easy to hack we couldn’t give them to adult hackers — they’d be laughed off the stage,” Braun told ABC News. “They thought hacking a voter website was interesting 20 years ago. We had to give it to kids to actually make it challenging.”

Until governments get serious about voter integrity I don’t look for things to improve.