We broke news a little over two weeks ago that there could finally be justice for fallen rapper “XXXTentacion”; today we moved a step closer.  Broward County Sheriff deputies announced the arrest of 22 year old Michael Boatwright today in connection with XXXTentacion’s murder.  Police say he was one of the two shooters to kill the martyr and rap artist XXXTentacion.  Boatwright was in custody on a drug charge when officers informed him of his murder charge.

Wow, that has to suck. Here you are counting down the hours until you are released from the gawd awful hell hole known as Broward County jail, you spy a few officers headed your way and a smile creeps across your face!  You are getting out, your family will come pick you up, take you over to KFC or Wingstop to reward your release from the pen, and wham, like a ton of bricks you find out that stack of paper you thought was your belongings is a document arresting you for murder!  Man that counts as a bad day, worse yet you get moved from a less serious offender unit to a hardened criminals unit!  Boatwright’s dream of KFC and Buffalo Wing’s, have been replaced with Nutraloaf, oatmeal, and mystery meat.

Before we get too excited about the murder charge, looks like this Boatwright character had a pretty rough week as he was locked up pending trial on a long list of charges.  Inmate records show that, in addition to the murder charge, Boatwright is pending trial on charges of cannabis possession; possession of cocaine with intent to sell; manufacture or deliver; possession of the drug, flakka; battery on a specified employee; resisting/obstruction without violence; and probation violations, among other charges.

The 22-year-old was already in Broward County Jail after his arrest Thursday on felony cocaine possession with intent to sell or deliver and misdemeanor marijuana possession charges, which brought additional violation of probation charges. Boatwright is on probation until April 2019 from battery and drug charges.

It takes some people decades to get a rap sheet that long; Boatwright accomplished this before most people finish college!  I guess you could say he graduated from petty crime, assault, and drug distribution to murder.  By the way just to remind our loyal readers “allegedly.”

Editor Note:  For those not up on current trends in street pharmaceuticals, here is the lowdown on flakka.

Flakka is a designer drug that can be snorted, smoked, injected or swallowed. It may also be combined with other, softer drugs such as marijuana.

Flakka is most typically made from the chemical alpha-PVP, which is a synthetic version of the amphetamine-like stimulant cathinone. Cathinones are chemicals derived from the khat plant grown in the Middle East and Somalia, where the leaves are frequently chewed for a euphoric buzz.

Flakka is one of a number of cathinone-based drugs that are produced in China and sold online to small-time drug gangs in the U.S. And the business is lucrative. Hall says that with small investment of only a few thousand dollars, a dealer can walk away with as much as $75,000.

A quick look at Boatwright tells me he has never really been in jail before; the lack of a decent mugshot; and lack of any tattoos tell me he may not be the best candidate for jail time.  He looks like a mama’s boy to me. Especially in comparison to Dedrick Williams, the other “alleged” shooter.  Williams looks like he knows the inner workings and politics of jailhouses very well.  Also he is no stranger to an orange jumpsuit or a bowl of jailhouse oatmeal for breakfast.  Hopefully these two can be cellmates because Boatwright will need a good support group.  I also noticed Boatwright has yet to hire a lawyer; bold strategy, but you know what hey, why spend all that money when you can represent yourself!  It’s a constitutional right we all get!

When reached for comment Boatwright said he “dindu nuffin” so I guess that means he will fit right in with the rest of the animals in jail who also found themselves in the unique position of saying “they didn’t do it.”  Couple words of advice for Mr. Boatwright, first get used to the food quickly, it will ensure your survival.  Might be tough at first because I heard the maggots and cockroaches in the jail kitchen never touch the food, and sprint immediately toward the exterminator hoping to be put out of their misery quickly.  Also do not under any circumstances drop the soap! 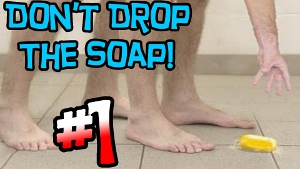 If you happen to do so, just let it go, it’s a painful lesson otherwise brother!  Stay strong!

Finally the police are seeking a second unidentified gunman as well as wanting to speak to one Robert Allen about the shooting as well.  Some unsolicited advice to Mr. Allen you are also wanted for a felony charge of possession of flakka, a concealed gun as well as probation violations. If I’m you brother, I’m Googling countries with no US extradition laws.  Get out while you can before the police can frame you for this heinous crime as well.  Also remember the 5th Amendment, and by that I’m talking about the right to keep your mouth shut, not the right to a 5th of Hennessey.