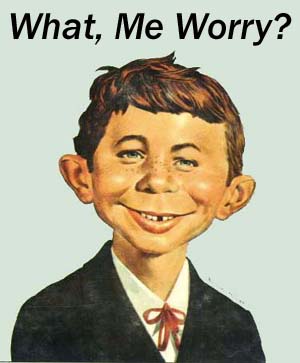 One of the most frustrating things for Conservatives is the lack of concern that the elected folks and those in government have concerning underfunded promises made by government. This is especially true when we look at government funded pensions and Social Security. California’s State Treasurer admits that California governments (state, county, and local) are 1.5 trillion dollars in debt (Link: Treasurer Debt Watch) and this does not include the estimated 1.4 trillion in underfunded pension liabilities for the State (state, county, and local). From our perspective, the government officials are behaving much like Mad Magazine’s Alfred E Newman who is best known for saying, “What, me worry?”

This fall, I took a class on government accounting that was sponsored by the California Department of Finance. Much of the class focused on the way California does things. Please understand that the Dept. of Finance is the government agency that assembles the budget presented each year by the Governor to the Legislature for approval. When the Dept. of Finance speaks, powerful people listen. (Think Moody’s, Standard and Poor’s, etc.)

I could get into much vocabulary on things such as GAAP (Generally Accepted Accounting Principles) and GASB (Governmental Accounting Standards Board) but it’s not necessary for this discussion; instead you only need to know one term, measurement focus. When this term is applied to governmental accounting, it looks like this:

The key phrases in the quote above are “current financial resources” and “modified accrual”.

This is radically different from what people do in the private sector. Normally, businesses use accrual accounting. Under accrual; assets and liabilities are recognized when they happen. For example, in a private business when you bill a customer, an accounts receivable is created. The A/R is treated as an asset at that point, you don’t wait until the customer’s payment is in your bank account.

Government doesn’t do that. Instead they purposely ignore certain things because under current financial resources, government only cares about the current fiscal year. In the example above, government only recognizes the receipt of cash as an asset when it is deposited in the bank, except at year end. Assets and long-term liabilities are purposely ignored except on a few special year end reports.

So practically speaking, this is how government treats pensions:
• Employee money withheld from paychecks for retirement are sent to the federal government for Social Security and state retirement is sent to CalPERS. Assets are done.
• Retirees in the system are sent their retirement checks. Liabilities are done.
• Conclusion, pension system is ok.

Seriously, their view is really that simplistic. Why? Because the current fiscal year was taken care of.

Oh, just so you know, they treat bonds this way also. As long as they can cover interest payments for the current year then per government accounting, everything is wonderful.

I realize that from a practical point of view this makes no sense but that is how it is. It goes back to GAAP. Specifically, the Generally Accepted part. If governments agree that things should be done a certain way, then that is the way they will do them. It’s not a matter of what is right or more technically correct or responsible to the next generation, if it is generally accepted not to worry about long term obligations then they don’t have to.

Don’t just take my word for it, here’s straight from the textbook:

And there you have it ladies and gentlemen of the jury. The fix is in and they are all in on it. It is clear that the authors of the textbook are just as indignant as we are about it but as they say, “Such is life”.

So next time you hear someone claiming the California budget is balanced remember the unspoken weasel words they are omitting, “Budgets are balanced in form…but not economic substance”.