My son is struggling at school with the fact that so many students at his supposedly Christian school are strongly supporting Hillary Clinton. The school is sponsored by a denomination that is proudly prolife and supports traditional marriage and prohibits homosexuals in the pulpit. The theological disconnect between the denomination and the student body (and therefore the parents since children reflect the views of their parents) on these issues is troubling.

My solution was simple, ask the kids rooting for Hillary to name three of her accomplishments. As expected, none could name one. The closest any kid got was trying to say she improved the economy over the last year. When my son told me this I laughed and said, “She’s been unemployed for the last year so how could she improve the economy?”

It was in this context that I saw this on Facebook the other day and it got me to wondering, did she really say this? 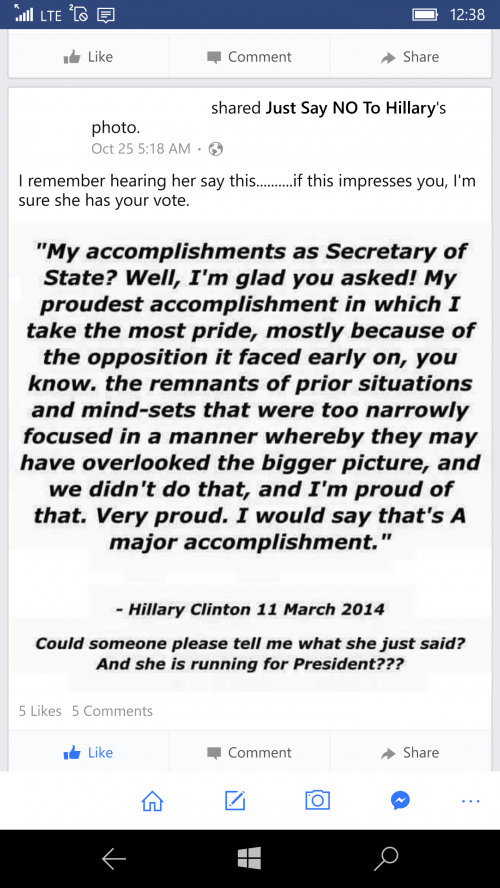 “My accomplishments as Secretary of State? Well, I’m glad you asked! My proudest accomplishment in which I take the most pride, mostly because of the opposition it faced early on, you know. the remnants of prior situations and mindsets that were too narrowly focused in a manner whereby they may have overlooked the bigger picture and we didn’t do that and I’m proud of that. Very proud. I would say that’s a major accomplishment.”

Could someone please tell me what the hell she just said? And she may be running for President?
Link: Moral Matters-Clinton Explains Accomplishments

Snopes says no way did she say this and a web search has difficulty turning this quote up; however, Snopes has been proven to be in the tank for Hillary and is known to lie to benefit her due to their political leanings being more important than the truth.  We have proven repeatedly on my blog that the Internet is scrubbed to remove damning things about politicians and others, hence my reference to 1984 earlier this month.

Snopes’ rebuttal came on July 30, 2014 but I did find the exact quote along with several others in an article dated July 10, 2014. Please note the differences in the quote below. The use of the ellipsis in the quote is important.

Yesterday, without any introduction, I had my son look at the Facebook quote and even he—at aged 11—noticed that some words were missing. He asked me why some sentences started with lower case letters. The quote below will answer this question.

“My accomplishments as Secretary of State? Well, I’m glad you asked! My proudest accomplishment in which I take the most pride, mostly because of the opposition it faced early on, you know… the remnants of prior situations and mindsets that were too narrowly focused in a manner whereby they may have overlooked the bigger picture and we didn’t do that and I’m proud of that. Very proud. I would say that’s a major accomplishment.”
Link: Quiners Diner-Ms Clinton what are your accomplishments

It appears that this is a more accurate rendering of the original. Based on what I know of the Internet, English grammar, and other things Clinton said during the same time period, I must conclude this quote is genuine.

Here are some other quotes from Clinton from the same timeframe in 2014.

Look, I spent four years traveling the world on behalf of the United States. I went to 112 countries, nearly a million miles, all the statistics, and I came away from that experience even more confident and positive about our model, about our potential. I don’t want to sound chauvinistic, but I was very proud to represent the United States.
Link: Daily Beast-Friedman interviews Clinton

Diane Sawyer asked Hillary Clinton what significant things did she accomplish during her four years as Secretary of State?
Clinton “didn’t even attempt to answer the question. She just changed the subject.”
Link: Hillary can’t name Top Accomplishment As Secretary of State

Toward the end, Friedman turned to Clinton and said: “When you look at your time as Secretary of State, what are you most proud of, and what do you feel was unfinished, maybe love to have another crack at someday?”

Clinton and the audience laughed, because “another crack at someday” seemed an obvious back-door way of asking whether Clinton will run for president in 2016. But then she answered, and revealed something critically important about her intentions.

“Look, I really see my role as secretary, and in fact, leadership in general in a democracy, as a relay race,” Clinton said. “I mean, you run the best race you can run, you hand off the baton. Some of what hasn’t been finished may go on to be finished …”

The answer seemed to concede that there is no single, momentous thing Clinton can point to as having achieved during her years as the nation’s top diplomat.
Link: Clinton rambles about accomplishments

I did a search on another speech that Clinton gave and I can’t find a single Liberal leaning website with a transcript of Hillary’s speech to the Women of the World Summit in New York City in 2014. There are a few links to YouTube videos but not a transcript that is easily obtainable. This paragraph was widely circulated at the time.

“We had the worst economic crisis since the Great Depression, we had two wars. We had continuing threats from all kinds of corners around the world that we had to deal with. So it was a perilous time frankly. What he said to me was, ‘Look, I have to be dealing with the economic crisis, I want you to go out and represent us around the world.’ And it was a good division of labor because we needed to make it clear to the rest of the world, that we were going to get our house in order. We were going to stimulate, and grow, and get back to positive growth and work with our friends and partners.”
Link: Hillary struggles to name accomplishments

The bottom line is Clinton has no accomplishments that she can name so it’s no surprise that neither can those who vote for her. She’s just an empty pantsuit.