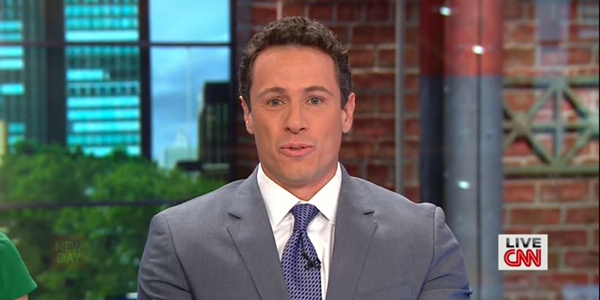 Cuomo’s abrupt response came after Judge Moore stated, “Our rights, contained in the Bill of Rights, do not come from the Constitution. They come from God. That’s clearly stated in the Declaration of Independence.”
Cuomo, a licensed attorney, sharply interrupted Judge Moore, arguing, “Our rights do not come from God, your honor, and you know that.
“They come from man. … That’s your faith. That’s my faith, but that’s not our country. Our laws come from collective agreement and compromise.”

CNN anchor Americans rights do not come from God

I know Judge Moore. I met him about 20 years ago, shortly after he posted the Ten Commandments in his court room. He is the epitome of a “Southern Gentleman”. He is soft spoken and has a spine of steel. Unlike most Ivy League and public school graduates, he actually has an education and believes in the principles on which this country was founded.

Chris Cuomo is the son of “Mario the Pius” as Rush Limbaugh often called the former New York Governor. Cuomo is just another North-East Liberal who is Catholic in Name Only. He—like many others in our country—managed to spend years being indoctrinated in classrooms while avoiding an education.

The author of the article quoted above points out that Cuomo is a licensed attorney…as if I’m supposed to be impressed. Most attorneys that I know are bumbling, incompetent, and so unfamiliar with the law that most of their legal advice is in fact contrary to the laws they are sworn to uphold.

What you see in the brief exchange quoted above is the centuries old debate between two worldviews represented by John Calvin and Jean-Jacques Rousseau. I had to read Rousseau in college and I’m sure Cuomo did too since his answer is just a regurgitation of Rousseau’s Social Contract; “Our laws come from collective agreement and compromise.”

What they don’t teach in college is that Rousseau did not write his Social Contract in a vacuum. The key is where did he live when he wrote his famous book on political theory? Geneva. Once you know where it was written (and when), then you are a big step closer to understanding its content. Rousseau’s famous work is in fact a rejection the teachings of John Calvin and an attempt to substitute a secular humanist worldview for a Christian and biblically based one.

Rousseau and Thomas Hobbs (Leviathan) are the two pillars of modern, secular, political theory. The fact that neither man is correct doesn’t seem to bother anyone. The important thing is that both man rejected any biblical basis for the existence of government. Once Scripture can be ignored then government becomes all about power. In a sense we are back the Pharaoh v Moses (the thesis of Gary North’s book on Exodus).

People like Cuomo think Judge Moore is some wild “cowboy” off doing his own thing or a scofflaw for ignoring the US Supreme Court. Federalism issue aside, Cuomo again is displaying his ignorance of history. Moore is exercising the Doctrine of the Lesser Magistrate. For those who have never heard of this here is part of the Wikipedia article.

Surprised to see John Calvin’s name here or Martin Luther? I’m not. So again, this conflict is Calvin v Rousseau.

The bottom line is that Cuomo wants the power of the State to be wielded against biblical values and see “gay marriage” imposed at the point of the sword. My response to that is what we pray in the Litany, “Good Lord deliver us”.