Amazon Dot Com has some peculiar pricing practices. My son has wanted to play Diablo III with his dad. Please understand that you need the full game of Diablo III before you can install the expansion pack so at list price this is $39.99 twice or basically $80.

Back in September I bought the expansion pack “Diablo III: Reaper of Souls” for $19.99. This price only lasted a few days. Typically each part of the game sells for between 29 and 32 dollars on Amazon. Blizzard has only dropped off their $39.99 suggested retail price once and that was only on “Black Friday” where each was $19.99. I have been waiting since December for a price drop so I can get my son a copy. Well, on Friday February 6, the original game dropped to $19.99 for one day. I placed my order. The expansion pack price did not drop at the same time. However, Diablo III went back up and then the expansion pack dropped to $19.99 on Sunday. So guess what I bought yesterday? 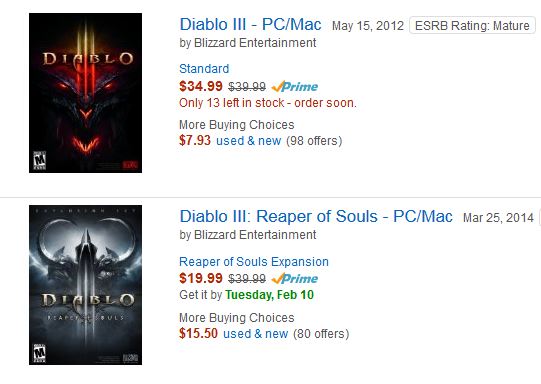