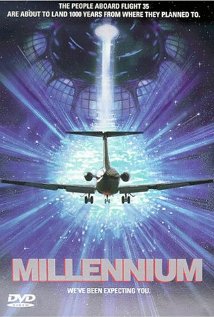 Millennium is a movie released in 1989.

Here is the plot synopsis: An NTSB investigator seeking the cause of an airline disaster meets a warrior woman from 1000 years in the future.
Yeah, future babe travel thru a wormhole and steals bodies off a doomed commercial jetliner to save the human race in her time.

Tonight I found this story.

CNN’s Don Lemon: ‘Is It Preposterous’ to Think a Black Hole Caused Flight 370 to Go Missing?

CNN’s Don Lemon has been entertaining all sorts of theories about the missing Malaysian Airlines Flight 370, including the chance something “supernatural” happened, but on Wednesday night, he actually asked panelists about the possibility a black hole was involved.

Lemon brought this up along with other “conspiracy theories” people have been floating on Twitter, including people noting the eerie parallels to Lost and The Twilight Zone, and wondered, “is it preposterous” to consider a black hole as a possibility?

Mary Schiavo, a former Inspector General for the U.S. Department of Transportation, said, “A small black hole would suck in our entire universe, so we know it’s not that.”

Here’s another theory I’ll just throw out there: what about the plane entered a wormhole into another dimension? I don’t know if that’s how the science works, though.