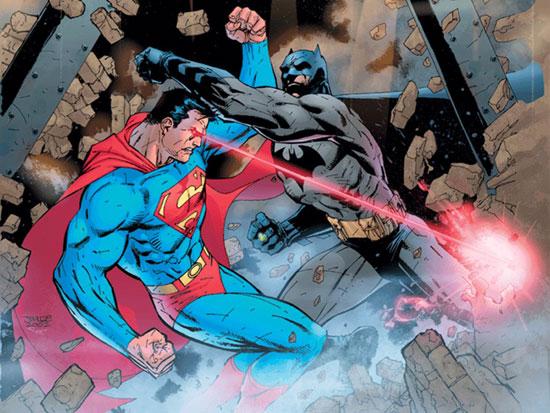 I grew-up with Superman as a part of my youth. I remember George Reeves stopping bad guys with guns and Christopher Reeves stopping Gene Hackman with nukes. Both versions of the iconic comic book hero were likeable and campy. This summer we were treated to a new version of Superman. In this film, director Zack Snyder went out of his was to keep away from the tradition of “fighting for Truth, justice, and the American way” which has been the bedrock of classic Superman lore. Instead, the new incarnation of Superman has Henry Cavill doing something heretofore unspeakable; Superman kills General Zod.

As a follow-up, the next movie is supposed to be Superman fighting Batman. I have a lot of problems envisioning how two heroes of my childhood are suppose to beat the crap out of each other as a way to get us to a Justice League movie. I’m thinking Adam West v Christopher Reeves—not possible; they’re both nice guys. First how does Batman cripple Superman enough to land a punch that hurts? He can’t use Kryptonite because in the new Superman, he does not have a weakness to the rocks from his home planet.

“I’ll be honest with you, there’s no Kryptonite in the movie,” Snyder said. Man of Steel hopes to humanize Superman, but by giving him new flaws and vulnerabilities. Superman actor Henry Cavill said, “Although he is not susceptible to the frailties of mankind, he is definitely susceptible to the emotional frailties.”
Zack Snyder says there’s no Kryptonite in man of steel

So how does this revelation square with the graphic novel by Frank Miller that is supposed to be the basis of the next movie? Miller has an older Bruce Wayne give Superman the beating of his life because Supes is too tight with the military. How can anybody beat-up Superman more than General Zod did in Man of Steel? Again, I ask how an old Bruce Wayne will lead us to the Justice League? Doesn’t sound like “Super Friends” to me. This all seems overly complicated.

Batman v Superman director Zach Snyder will have talks in the next few days with the man who first pitched the two superheroes against each other in an iconic comic book tale 30 years ago.

I think Warner Brothers is betting a lot on this movie and this plot line. Batman v Superman will either rid the DC universe of more mega budget movies or the franchise will go the way of Star Trek; same names, different reality. How both characters—Batman & Superman—could become lifelong friends after this film will require more good writing and directing than Hollywood has displayed so far this summer. Then again they are copying Miller’s tome not producing an original script.

I would like to dwell a few minutes on the climax of Snyder’s Man of Steel where Superman kills General Zod. Before I make my comments, I want to insert portions of this story from http://www.blastr.com

Comic guru Grant Morrison has been cranking out acclaimed funny books for decades, so what does the DC alum (and accomplished Superman comic writer) think of Man of Steel? Turns out, he has some qualms…

Morrison saw the good and the bad (“kinda liked it and kinda didn’t”), but said that controversial ending that saw Superman snap Zod’s neck definitely rubbed him the wrong way.

His reasoning is actually pretty great:

“It’s a credible Superman for now. But I’m not sure about the killing thing. I don’t want to sound like some fuddy-duddy Silver Age apologist but I’ve noticed a lot recently of people saying Batman should kill the Joker and, yeah, Superman should kill, he should make the tough moral decisions we all have to make every day. I don’t know about you, but the last moral decision I made didn’t have anything to do with killing people. And I don’t think many of us ever have to make the decision whether or not to kill. In fact, the more you think about it, unless you’re in one of the Armed Forces, killing is illegal and immoral. Why would we want our superheroes to do that?

There is a certain demand for it, but I just keep wondering why people insist that this is the sort of thing we’d all do if we were in Superman’s place and had to make the tough decision and we’d kill Zod. Would we? Very few of us have ever killed anything. What is this weird bloodlust in watching our superheroes kill the villains?”

As much as Snyder tried to make a grounded, relatable version of the character, Morrison makes some good counterpoints. What do you think? Was the ending brave, or controversy just for the sake of it?
legendary comic writer grant morrison bashes man steel ending

I understand that it is not in the comic book “cannon” for Superman and Batman to kill; however, if they had the powers exercised in the comics and did those things in the real world, most certainly people would die. You can’t keep knocking over skyscrapers like Supes and Zod did in Man of Steel and not have them land on top of innocent bystanders.

The key quote in the article above is, “… unless you’re in one of the Armed Forces, killing is illegal and immoral. Why would we want our superheroes to do that?”

Morrison clearly does not believe that we have a right to self defense. This reasoning is the basis that explains why nobody understands the Second Amendment. The Second Amendment is the right to defend yourself, your family and property from invaders whether they are criminals, foreign invaders, or government agents. The Second Amendment is predicated upon the right of private ownership of property. Limited government requires citizens to be responsible for themselves and their communities. Both State and Federal governments were intended to be distant from the daily lives of average citizens.

In Man of Steel, Superman was placed in a situation that innocent people would be murdered by General Zod unless he took drastic and immediate action. Superman was protecting lives so killing Zod was justified. However, what we know in our hearts is that the makers of this movie were manipulating us purposely by killing a piece of innocence. Killing Zod moved Superman from a comic book world of black and white, good and evil into the modern realm of moral relativism.

This tearing down of cultural pillars evokes a reaction in us that we often can’t quite quantify or even identify. We know the net result is that we are further from what God wants us to be. Our hearts of flesh are turned a little more into stone each time the forces of humanism tear-down the old order.

Superman may be the embodiment of Nietzsche wrapped in red, white and blue or a totally separate creation, but despite his origin as a defender of Roosevelt’s New Deal, Superman came to represent many of the ideals of Tom Brokaw’s “Greatest Generation”. His killing of Zod is symbolic of a repudiation of the values of our parents and grandparents. Flawed as his worldview is, I think Grant Morrison senses this substitution of values when Snyder’s Man of Steel takes a life, ever when fully justified.

If you couple the above discussion with the pre-publicity that Man of Steel was purposely using many symbols to equate Superman with Jesus then the ending is even more clearly a rebuke to the faith of our fathers. man steel filled with jesus christianity references Snyder, like J.J. Abrams and Star Trek, is trying to convince us that we live in a world of varying shades of gray, one that is devoid of any moral absolutes. Snyder, like Nietzsche, is trying to declare that “God is dead”. The logical result is that there are no absolutes just choices.

I disagree. As I heard R.C. Sproul Jr say recently, “God didn’t come to make bad people good; he came to give dead people life.” God believes in absolutes and the devil thrives in shades of gray. Culturally, we are moving away from God and slinking into the shadows. It often seems like the 99 sheep went astray and only the one stayed with the Sheppard.

In half a year we have lost marriage, privacy, Boy Scouts, and now Superman. At this rate I think our proverbial goose is cooked.