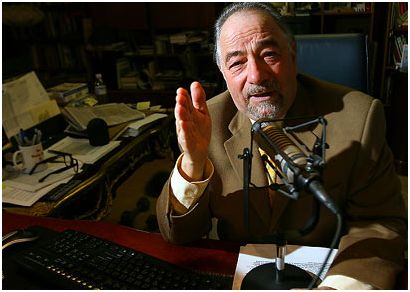 Recently I spent two days with Michael Savage. OK, I actually only saw him for about ten minutes over the course of two days, the remainder of the time I was camped outside his front door. He made me swear not to say anything until he was thru with me. I did as he requested. Now that I have been released from my obligation, I wanted to share the experience.

This actually all started about six weeks ago. I was surprised to get a personalized invitation complete with a pre-paid parking pass. (We all know what a premium there is on big city parking spaces.) My employer was willing to let me go with pay so I had no excuse not to attend.

I consulted the appropriate website for instructions and reported at 8 AM as requested. I ended up being in a group of 150 folks. The room where Michael held court was so small that we had to enter in two groups of 75. Michael was actually in the room when I entered. He greeted us and then his secretary swore us to secrecy. Michael then dismissed us to wait in the hallway and called in the next group.

My experience was nothing like you see on television or the movies.  Michael was actually statesman like and even tempered. However, his time management skills were not very good. It’s no wonder that he has people to cover for that deficiency.

The cafeteria in the building where he works is a cash only business so at lunch I opted for alternatives within walking distance. (Magic plastic is my currency of choice when traveling.)

The other thing I learned was that he really likes to take Fridays off. I never knew he liked golfing but what else do professionals like him do during the week when they aren’t working.

Michaels’ producer was named Josh and I actually interacted more with him than with Michael. I had flashbacks to my Navy days with all the hurry-up and waiting that I experienced.

As you might have surmised by now, I was not hanging with the radio talk show host but with a superior court judge while auditioning to serve on a jury. Since I was number 144 out of 150, I knew I would not be on the panel.

After the jury gig was concluded, I looked him up on Google. I found that Judge Savage seems willing to throw the book at folks that deserve it. He is best known in the media for his comments on the failures of child protective services.

In a searing condemnation of CPS, the judge recounted repeated failures to save the little girl from months of beatings that eventually killed her and sent her mother and Martin, the mother’s live-in boyfriend, off to prison.

“There is not the slightest evidence in this case that the protection or safety of Valeeya or her brother was ever a priority, or even a significant concern, for the agency or the caseworker charged with their protection”…
Sacramento judge eviscerates-defendant

Judge Savage and I also have a mutual acquaintance; former NFL player Keith Wright. Wright spent several years playing professional football. His last team was the Detroit Lions. Wright was disabled as a result of injuries sustained in the NFL and was attending the MBA program at the University of Phoenix when I met him. A few years later, Wright was sentenced by Judge Savage to life in prison.

On July 21, Aug.  8, and Aug. 21 of 2011, Wright committed three home invasion robberies in the Natomas area.  Each time, Wright threatened the victims with a firearm, demanding money and property.

During one of the robberies, Wright sexually assaulted and kidnapped the female victim, forcing her to drive to two different banks and withdraw money.

Wright was determined to be a suspect in the Aug. 8 robbery after it was discovered he exchanged rare foreign currency stolen during that robbery at a currency exchange business. He was linked to the Aug. 21 robbery and sexual assault through DNA analysis.

Property from each of the victims was found during a search of Wright’s home.
former nfl-player receives life sentence for natomas crimes

Michael Savage, the judge, looks more like Sam Waterston from the TV show Law and Order than the radio talk show host. I found an internet article stating that Savage is also a long distance runner.

My brief time with him was interesting but I’m glad to be back at work.