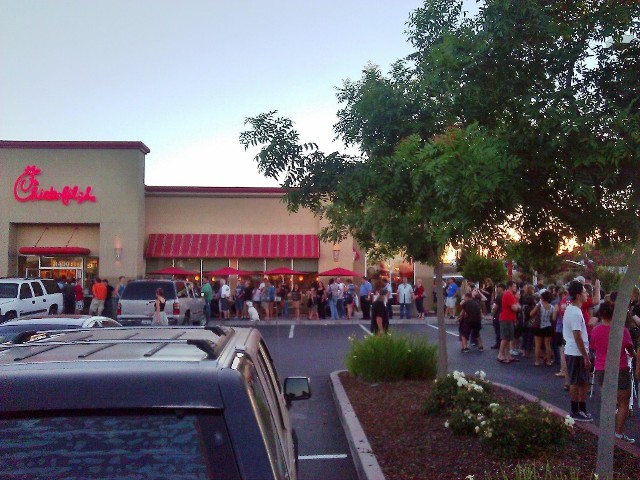 Yesterday, like millions of Americans, I went to Chick-fil-A to show my support of traditional marriage and the First Amendment. Actually, I bought breakfast there for my whole family and returned about 8 p.m. in hopes of finishing the day with a milkshake. We waited about 50 minutes to get to the counter and place our drink order (by then they were out of many food items including ice-cream). Some friends that we saw in the drive-thru line said it took about an hour and a half to get to the place where they could give their order and almost two hours to complete the whole evolution.

The atmosphere was festive, the people were polite to each other and it was genuinely fun to be there. The line periodically did “the wave” and everyone got along great. No one cared that the place was out of food. I heard people say they would settle for a catsup packet if that was all that was left. They wanted to show their support. I thought of the people voting in Iraq that waited in long lines and earned a purple thumb when they voted. Yesterday we voted and the sound reverberated down the spines of the ruling class.

The message was loud and unmistakable. Barry Obama and his minions have struck a nerve with main street Americans. The people have had enough and are ready to shove the children out of the White House. Political correctness finally crossed the Rubicon.
Yes, Mr. President, the Cathy family did build it without your help. Now get out of our way and let our people grow.