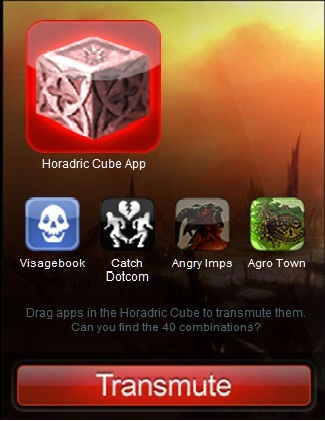 Attention gamers. Blizzard now has a smartphone app so you can have your own Horadric Cube right at your finger tips.

You have quite a treasure there in that Horadric Cube app! Using this app, you can transform and recombine any number of other apps you drag into it. Use the Cube’s transmute power, and the Cube’s Horadric magic will change the existing apps into a new, potentially more powerful app. But beware! A terrible fate awaits those who do not heed the warnings contained within the ancient scrolls. You must not attempt to drag the cube into itself! No good can come of it! . http://us.blizzard.com/diablo3/media/horadrapp/

In addition to transforming any apps on your phone to make them even more powerful, Blizzard promises that you will soon be able to use their smartphone app to open “…portals to the deepest depths of the Burning Hells…”. The correct runes must be downloaded separately.

Using new media is the best way to spread the word so hopefully this means Diablo III will finally have a release date in the second half of 2011. Skeptics caution that this app might be the real reason the world ends in 2012. Beware!