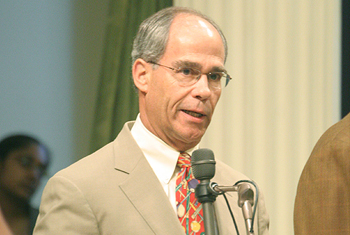 Rick Cua did a song many years ago called “Crash the Party.” More recently there was a movie about the “Wedding Crashers.” In this election cycle there is a new kind of crasher. This one is the termed-out assemblyman that desperately wants the California senate seat vacated by the death of Dave Cox.

Roger Neillo—the Primary Crasher—has shown-up at several events that he was never invited to attend to try to further his political career.

Several weeks ago the Cosumnes Republican Assembly in Elk Grove contacted both Ted Gaines and Roger Neillo to check the availability of both men to speak at their September meeting. Ted Gaines responded first so he was scheduled in September and Neillo was told he would be welcome at the group’s October meeting. Not to be dissuaded, Neillo invited himself to the September meeting anyway and spoke after Gaines.

This meeting fortunately was covered by the Elk Grove Citizen newspaper that accurately quoted Neillo as saying he was a better candidate because he would collaborate with Democrats. “And you’re only going to be effective if you collaborate. Collaboration is extremely important.”

Last Saturday Neillo did it again. This time it was a large precinct walk in Rancho Cordova for Dan Lungren and Jack Sieglock. Neillo pulls up in a motor home with billboard decals all over it touting his campaign. Out of the motor home jump about a dozen staffers in matching Neillo t-shirts. As a sitting assembly member, Neillo got a shot to speak after Sieglock and Lungren. Neillo didn’t say I’m here because we need to get these men elected or anything like that. My impression was that he wanted to be seen with the “right people.”

Neillo’s behavior was tacky and inappropriate. I asked after the event was over who invited Neillo and was told by a staffer for another campaign that no one did. Neillo invited himself!

This says to me that Neillo has been in politics for too long. He is one of the professional politicians that the Tea Party should try to retire. Neillo has forgotten the purpose of representative government. He does not represent his constituents. He likes the power and gamesmanship that he exercises because he is the California version of Lindsey Graham. He not only voted for the largest tax hike any state has ever passed but to this day he justifies this voter as the right thing to do to save California. No one ever asks Neillo if this vote really “saved California from going off the cliff” then why was the State Controller issuing IOUs five months after the vote?

The only principle Neillo has left is the one about winning. Unfortunately, his idea of winning seems to be at any price.

Lastly, have you noticed the campaign strategy that he has adopted? In addition to the usual advertisements you might see in a campaign, there are an abnormal amount of ads for the Neillo car dealerships in places that they never usually advertise. Neillo is getting an “in kind contribution” from his family. These ads try to make people feel confident in the Neillo brand. What other car dealer ads are you hearing now? None is the correct answer. My only question is does that family want Roger to win to further his career or to keep him away from the family business?