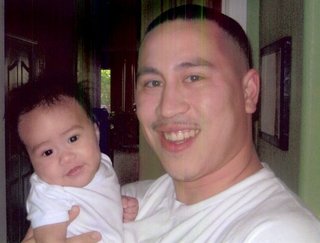 The father left his son in the car and walked up to the front door of a friend’s house and was jumped by two gunmen. All three men entered the house and a fight broke-out. The father was killed from multiple gunshots. The baby was in the car and strapped into his baby seat. As the gunmen left the house, they went over to the car and purposely shot the 8-month old infant in the head.

The motive is unknown.

The father was a boxer and had been training for a return to the ring. He had not fought for several years but had aspirations. Police have supposedly ruled-out gangs and drugs. This crime seems like something from a Mickey Spillane novel. Killing a man during a robbery is one thing, but executing his son raises the crime to the level of a mob hit.

I am particularly angry about this crime. Killing a baby in this purposeful manner is a crime that most folks would agree is worthy of a quick trip to the gallows. Part of my emotional response to this is the fact that it happened very close to where my wife works. In addition, I have a son that is two years old.

I hope the police will find the people responsible for this crime and rid our society of such evil men.