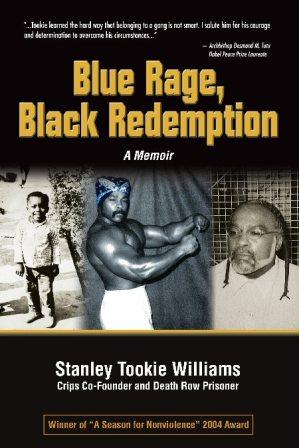 Tookie has written children’s books to warn youngsters of the dangers of gangs. For this act of penance, Craig DeLuz argues that Tookies’ sentence should be commuted to life in prison.

I like Craig and have talked with him on several occasions but in this instance, I must respectfully disagree. I would like to submit the following article on this subject for your consideration. This article first appeared in the Sacramento Union on June 1, 1991. It was written by Rev David Chilton. At the time, Chilton was Pastor of Church of the Redeemer in Placerville, CA.

Forgiveness Requires Restitution
The condemned man sat in his cell awaiting execution. James Morgan had been convicted of murder and sentenced to death under the justice system of 17th-century Massachusetts—the Puritan Colony par excellence.

The Puritans have often been stigmatized as narrow-minded legalists, unconcerned about the plight of “sinners” in their midst. To the contrary, the Puritans, as good Calvinists, believed that all people —themselves included—are depraved and sinful, in need of the grace of God and the mercy of fellow men.

Accordingly, the Rev. Cotton Mather and other ministers visited Morgan in his cell and urged him to pray for repentance and forgiveness. To their delight, Morgan heard them and soon gave evidence of a sound, sincere conversion.

The whole Puritan colony joyously responded to Morgan’s change of heart. They held a special worship service, where Morgan testified to his newfound faith. He was embraced and received as a brother in Christ, with all the rights and privileges of a citizen of the heavenly kingdom.

The congregation sang a psalm of praise, thanking God for His goodness to James Morgan, the sinner who had become a saint.

Then they took him to the gallows and hanged him.

Shocked? If so, you need to understand how our forefathers’ world view affected their concept of capital punishment. To begin with, they firmly believed that only God is God. No institution can rightfully take His place.

That meant that only God could change people’s hearts. Unlike modern Americans, of both conservative and liberal stripe, Puritans did not expect civil government to transform the character of its citizens. The state, they believed, existed as a ministry of vengeance, to bring down God’s earthly justice upon criminals.

The purpose of punishing ‘a criminal, therefore, was not to reform the criminal’s nature, but to force him to make restitution. A thief was forced to repay his victim—double!—entering a period of indentured servitude, if necessary.

And the only restitution for murder was by the death of the murderer (based on such Biblical passages as Numbers 35:31 and. Romans 13:4). Capital punishment was mandatory. No exceptions.

But what if the murderer sincerely repents? Shouldn’t he be forgiven? Here, again, the Puritan conviction that man is not God provided a two-pronged focus that shielded them from our modern confusion.

The first point: Man—the state—is not free to bestow divine forgiveness. Since God has commanded capital punishment, evading it would be sacrilegious, nothing less than playing God.

The second point of their focus involves the nature of forgiveness. True forgiveness, they said, means simply this: dropping charges when full restitution has been rendered.

Executing a repentant, Christian murderer is perhaps the purest form of a proper separation of Church and State: neither institution tries to do the other’s job.

Keep this in mind next time you hear about Robert Alton Harris, the convicted murderer scheduled for execution. Some supporters argue he shouldn’t be executed. He has “changed,” they say; he’s “a different person” from the man who butchered two teenagers in 1978.

If that’s true—and the constant smirk on his televised image belies that claim—we are happy for him. We would encourage him to remain steadfast as he approaches the ultimate religious experience.

Ditto for Tookie and if he has found redemption, may God welcome him into His kingdom.

I want to thank you for the trackback and for sharing with our readers about Stanley. But your post does misrepresent my argument. Penance, redemption and/or forgiveness are not even part of my reasoning. As I stated in my piece: Stanley’s efforts, as extraordinary as they are, do not absolve Mr. Williams of his crimes, nor should they be cause to release him from the debt he must pay to society for those crimes. As a consequence of his crimes, Stanley Williams has given up his life. The question now is “What is the best use of this life we now hold in our hands?” The work he has done has had a significant, proven impact on reducing gang violence. I have read articles and letters from around the world detailing the impact his work has had. And because of this proven track record, I believe that there is a greater benefit to society by keeping him alive, in prison and continuing this work. I understand if you still disagree, I just wanted to clarify my point.