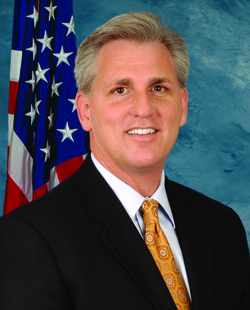 I know, I know I’m whacking poor Speaker Kevin again, but I want to illustrate a point I failed to make in yesterday’s blog.  One thing that irritated the establishment GOP and the Left is Trump’s negotiation skills.  While many likely went out and bought Art of the Deal, you could have saved your money and just watched.

Trump is a master at negotiating because he knows exactly what he needs and has his finger on what the other side wants.  He knows he can give the other side some while getting all of what he wants.  A perfect example is the stimulus checks, he insisted they have his name and signature on them.  The Democrats got a check, the GOP was fine with it (the bloggers here were not) but Trump got what he wanted.  Also look at the judges Trump got onto the court, he tried to negotiate, knew it was pointless and told Mitch McConnell via the media to “go nuclear.”  Suddenly Mitch turned conservative on Trump’s judges.  Bottom line, Trump knew how to negotiate and when to let someone else (media) do it for him.  Case in point, Lindsey Graham.  Either his balls finally dropped, or he realized getting called out in the media was going to burn him badly, suddenly he became a fire breathing conservative.

Contrast that to Kevin McCarthy, our new Speaker.  McCarthy strikes me as the awkward kid no one liked growing up, then he realized if he gained power folks would like him, and if they didn’t, he could wield his power and change their mind.  His negotiating skills bear that out.  During his time in the Assembly in Sacramento, and in Congress he always seemed to negotiate from behind.  This is the opposite of Trump.  McCarthy would start at zero and try to get to 50/50.  He would call that a win, to be fair Ryan, and Boehner before him operated the same way.  Boehner was known for chain smoking and crying, Ryan was known for being a policy wonk and speaking in robotic terms about GOP talking points.  It is because of these 3 “conservatives” that people like those on this blog have given up on the party.

In fairness to the 3 aforementioned leaders of the party, I will say again, what does the GOP actually stand for?  I heard my entire adult life, get us elected and we will; cut taxes, reduce spending, yada, yada, yada.  It never happens like that.  I’ve watched for 20 years the GOP giving the other side at least half of every deal, likely more, even when we had sizable majorities in the House and Senate.

Even the Trump tax cuts had to be bulldozed through by the Trumpster himself, and even then, they are temporary.

I will go back to my point on McCarthy and my perception of his upbringing again.  McCarthy and other folks who negotiate like him are always trying to “buy friends” or in their case “buy votes.”  They do not want to be the mean guy who upsets anyone, so as a result I’ll give you what your side wants if you don’t say mean things about me.  Remember the chief goal of a politician is not making good on campaign promises, slogans, or other sayings, it’s about getting re-elected.  In the case of McCarthy, it’s about keeping a majority as to guarantee him the speakership.

Congrats to the Democrats on getting at least half of what they want.