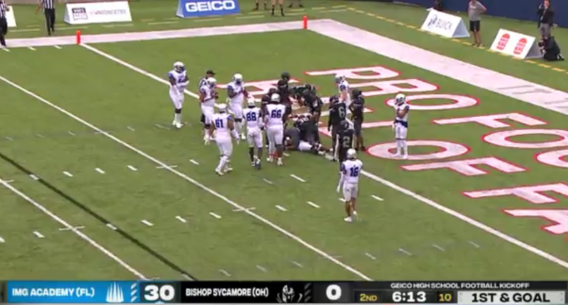 People get fooled by con artists all the time. It must work or why would so many people be trying to hustle us? Some of the best know Internet cons include: the Nigerian Prince promising you millions after you send 4 installments of several thousand, or your friend that has been robbed in some other country and turns to you to wire them money, or the person threatening to send your internet search history to your wife.  The cons exist everywhere and prey on those unsuspecting. Corporations sometime get fooled as well; it happens, although no one gets fooled like ESPN did a week ago.

Check this story out.

ESPN a Disney subsidiary has been televising high school football games on Friday/Saturday and Sundays for several years now.  These games highlight matchups of high school powerhouses traveling across state lines to play one another.  In addition, they showcase junior and senior athletes that are some of the most sought after prospects by colleges across the country.  These games are very popular as college recruiting has taken off in the last seven years.  These games attract quite a few eye balls, and the matchups are intriguing.  Also there isn’t much else to watch during this period on ESPN so it fills a time slot.

One of the matchups featured Florida powerhouse IMG Academy vs Bishop Sycamore a school out of Ohio.  The game was played and IMG won 58-0.  IMG Academy is a school boasting between 15-20 players who will play high level Division 1 football upon graduating, including 7 in the top 100 of ESPN’s own ranking database as seniors.  Bishop Sycamore claimed to have several Division 1 caliber athletes….emphasis on claimed.  In the 3rd quarter with the game out of hand, the commentators wondered aloud why this game was being played and at one point even called into question player safety.  Yes the game was that lopsided.  Here is a quote from ESPN about this… Paragon who is referenced apparently is a broker in finding these matchups to be aired.

“We regret that this happened and have discussed it with Paragon, which secured the matchup and handles the majority of our high school event scheduling. They have ensured us that they will take steps to prevent this kind of situation from happening moving forward.”

So what happened exactly here?  These same 2 squads matched up a year ago.  Another quote regarding the “so called top players on Bishop Sycamore”

“Bishop Sycamore told us they had a number of Division I prospects on their roster, and to be frank, a lot of that, we could not verify,” ESPN’s announcers said during the game “They did not show up in our database, they did not show up in the databases of other recruiting services. … From what we’ve seen so far, this is not a fair fight.”

Well it isn’t hard to discover Bishop Sycamore is a fake school.  First off, the term “Bishop” usually has an association with the catholic church/diocese in the area.  The Columbus area diocese has no record or affiliation with this school.  Ditto for the governing body of high school sports in all of Ohio.  Bishop Sycamore claims they are a charter school but can’t claim a sponsoring entity.  Maybe the following is why.

Bishop Sycamore is a scam, they are run by 2 men, Roy Johnson who has warrants out for his arrest for passing bad checks, among other things, and Andre Patterson a former Ohio State football player.  Patterson is listed as director, and assistant football coach. (Update: Johnson was fired, now Patterson is in charge.)  Patterson for his part continued the con job by saying the following about the talent on his “team”

“I try to defend when people who say, ‘Oh well, yeah, you lied about kids having Division I offers?’” Peterson said. “Well, I guess the best way for me to fight against that is having you sit down with us on signing day.”

Signing day is the day high school seniors make their decision of where to play in college.  Mr. Patterson is either delusional or has lied to himself so much he actually believes his schtick.  Bishop Sycamore had the wind taken out of its sails by a couple former “players” who said the class room consisted of just a building where we were told we could do classes, emphasis on could.  The classes were allegedly put on by a prep school online.  There was no practice schedule or field. They played in abandoned parking lots (yep) or fields at a local park.  When I tell you “tuition” (I use that term loosely) was $2,000 a year, it may start to come into focus.  This wasn’t a school; it was a glorified travel ball team.  When they traveled to the host team’s site, they would stay in a hotel, several to a room, with fraudulent check writing Roy Johnson “fitting the bill.”  One parent even said he wound up paying for the whole team once, as when he went to check-out, the front desk lady said no one had paid, and the credit card on file was rejected.  My favorite was the team was evicted from its own “team lodging apartment complex.”  The school has no address. It uses a PO Box and the website is too damn funny, it was taken down prior to publishing of this blog.  My favorite part was under each school centric tab, the drop down menu would say coming soon.  Here is the check writing shenanigans…

According to police reports, the hotel reported two invalid checks totaling $3,596. Garren said they were written on an account listed to Education Resources Group of New York, New York.

To further the con, the members of this team were a who’s-who of undesirable folks, and by saying that I mean no racial bias.  Some of the players were 19 or 20 year olds making this squad a danger to those it played against.  Additionally some had criminal records and would have been found ineligible just like the other “young adults.”  These players were from all over the country and would have been impossible to track on a database.

Jackson spoke with NBC4 in Columbus, Ohio over the weekend and answered questions about Bishop Sycamore, providing a fairly blunt assessment that actually seems to line up with what most people assumed in the first place.

“We do not offer curriculum,” Jackson told NBC4. “We are not a school. That’s not what Bishop Sycamore is, and I think that’s what the biggest misconception about us was, and that was our fault. Because that was a mistake on paperwork.”

NBC4 notes that when they pressed him on what that mistake was or entailed, Jackson didn’t provide any further information and said he didn’t know much about the paperwork, which was submitted to the Ohio Department of Education before he was hired.

They also pressed him on the fact that the “school” had reported a bell schedule for the prior year, beginning at 7:10 a.m. and going until 3:05 p.m. As for why a school that is not a school would have a bell schedule, Jackson had no answers. Bishop Sycamore head coach: ‘We are not a school’ but a ‘post-grad football academy’

Bishop Sycamore head coach: ‘We are not a school’ but a ‘post-grad football academy’

Stunning.  These schools pop up all over the country, some like IMG and others are legit, and can make your son/daughter into a much better athlete and earn that scholarship.  Others like this Bishop Sycamore are also common, and they are a scam.  This school didn’t even have an away uniform, so when they played IMG both schools were wearing black uniforms.  They even started a gofundme.com page to raise money for their uniforms.   Roy Johnson, Tayven Jackson and others all talk a good game, but it’s a load of crap.  Check out this comment by a former player “lunch and dinner?  Whatever we could steam from Walmart or a convenience store, they didn’t provide us with anything.  What a fecal blizzard this whole thing is.  ESPN is exclusively at fault here, they could have done some due diligence, even a little and it would have turned up this whole thing didn’t pass the smell test.  By the way Sycamore played a game the Friday night prior to the Sunday game against IMG, this is dangerous on a whole nother level.  These folks have zero regard for player safety.  Folks football is glorified gladiator, I played it in High School, there is a reason the games are held once a week, it does a toll on your body.  More crap from this scandal:

It was revealed that Johnson recruited the students with the prospect of “practicing at Ohio State‘s facilities.” In reality, they held practice outside of an apartment complex that housed students at Ohio State. The team also did not have athletic trainers, which resulted in the athletes playing injured. The apartments housing the students frequently evicted them after Johnson failed to pay rent. Many players already graduated from high school and there “were four or five kids that were 20, 21, [and] had children of their own.”  A number of players had legal issues; at one point so many players had active arrest warrants that the team couldn’t fly to away games. One player actually joined the team immediately after being released from jail. The team also struggled with camaraderie; a former player claimed there were at least five fights at every practice. Heads should be rolling at ESPN but I mean does anyone even have cable anymore?  I found out this story on the website awfulannouncing.com I visit every so often.  I used to think the cable companies were a con job, turns out it’s the cable companies getting conned by a school, who in turn cons you the payor.  Ouch.  Glad ESPN could not be bothered to check the top high school player rankings they literally have on their website…ouch.  Or maybe a Google search to see this school used to be called Christians of Faith Academy, which folded under the same scenario.   Or their story about being affiliated with the third district of the African Methodist Episcopal Church, another lie as the church claimed to have zero affiliation with this group.  An investigation showed money did exchange hands between the two…no shock most churches would take money from Satan himself today.  Roy Johnson also used the church’s name and the school’s name when he was selling life insurance in another scam…. FACEPALM.  there is a lot more out there folks.  But man is this fun to write about.  The worldwide leader in sports scammed by a group of guys who toss a pigskin round on a green belt.  Only thing this story is missing is uncle Jimbo who could thro  ball over them thar mountains, or stories about multiple DUI’s.

Folks if it sounds too good to be true it likely is.

PS:  The name Bishop Sycamore Centurions I will say is a pretty scary sounding team to play against so I will give them some credit here.  I however do not remember a bishop named after a tree in the Bible but oh well.

For more on Bishop Sycamore click here for the Awful Announcing Archive on this school.