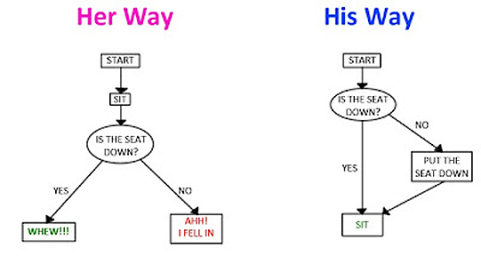 For the last month, our master bath and bedroom have been undergoing a remodel. The work is not yet concluded but being down to one bathroom has put the men in conflict with the women over the age-old question of should the lid to the toilet be left up or down?

We had to move everything out of the master bedroom including emptying the closets. The bathroom was completely gutted. While I advocated for using the old toilet as a flower planter in the front yard, mama wouldn’t hear of it.

(Sorry mama but I was just trying to relate to the Democrats in the neighborhood by sending less to the landfill.)

Anyway, the remodel forced us to use the kid’s/guest bathroom as our own. We’ve been perfectly content to let our son do whatever he wanted in this bathroom for many years and now he is forced to share with mom and dad.

Sadly, for us men, mama went in there one to many times at night and found the seat up. Granted mama could have turned on the light before trying to do her business but she chose not to. Mama’s seat was not finding the other seat where she expected it to be. This happened several times.

Mama’s wrath was terrible to behold. She got some tools and removed the toilet seat altogether. Yep, if she can’t have it then nobody can. She hid it from us. This went on for several days. I pulled junior aside and recommended that he apologize but it never happened.

Lucky for me, junior got an invite to flaunt the Governor’s tyrannical Covid orders and went on an overnight church outing with youth from other households. While he was gone, mama relented—hoping us men folk had “learned our lesson”—and re-installed the toilet seat. This, she thought, had surely taught the men what was expected of them.

Within hours of being back, junior had left the seat up twice. I put it back in the position that mama demanded. I pulled him aside and reminded him that mama’s wrath was fierce. Furthermore, that I couldn’t always cover for him. He agreed with me to do better.

A few hours late, as I was getting ready for bed, I went in the bathroom and was shocked to see his solution to always forgetting to put the seat down.

Yep, white duct tape was on both sides of the seat holding it down. No chance he will forget to do the right thing anymore. I thought it was genius and had mama come see the brilliance of our teenaged son.

Now mama is happy, I’m entertained, and junior has found a solution that doesn’t involve him actually having to remember to do anything.

Have a Happy New Year!