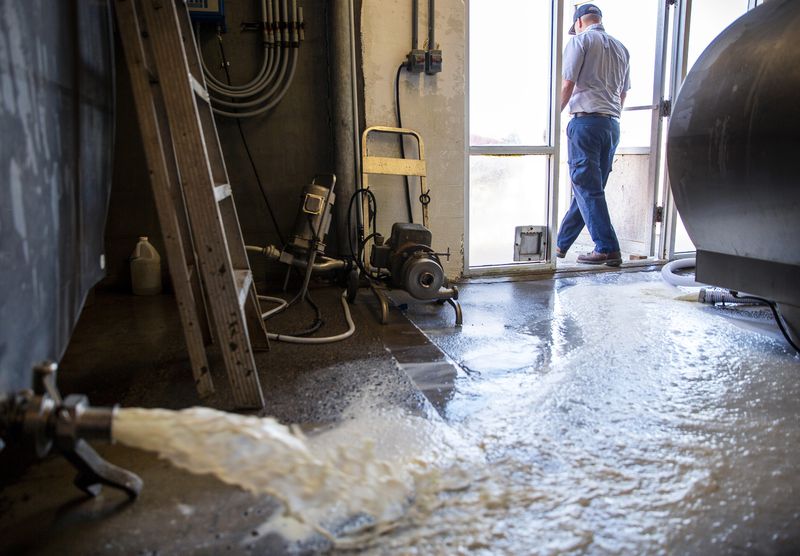 I have heard this question asked by a few people, and to be frank it is probably one of the most ignorant things one can ask. This had to have origins with the cable or 90-day crowd because the idea that farmers would dump hundreds of thousands of gallons of milk “just because” is at best absurd. Just to be sure I called an uncle of mine in Iowa who is a dairy farmer serving my old reservation to get his side of this story.

He actually was more than willing to discuss this issue and clarified quite a bit, now the cable crowd likely won’t listen but here is a snippet of what he had to say.

Why are you dumping gallons of milk?

Several reasons, first we have had spectacular decline in the milk category for a while, and it has been sped up by bankruptcies of two of the largest milk companies in the US. Second, most dairies are set up with contracts to sell their milk to processors that serve only a few customers/industries. For example if we are selling to a grocery store processor we are doing one/one and a half-half gallon cartons, schools and jails are likely quart/pint cartons, and restaurants are larger containers and quantities. With the shutdown of schools/universities/ball parks/theatres etc., demand has evaporated. So as a result, that processor won’t buy any additional milk from me.

The next big issue is that my cows must be milked every so often, so they can remain on a schedule, this is similar to a human body when it develops routine. I must keep my cattle on routine so if demand picks up I can stay on schedule, you cannot run into a situation where the supplier needs more, and you are unable to provide. As a result, you are seeing the dumping take place.

Can’t you sell to a different supplier/processor?

Not necessarily. Some have very lucrative contracts with Wal-Mart, school districts etc. and for deals like those they are likely exclusive, and repercussions are huge for going behind them and selling to others. Also keep in mind when you are flooded with excess likely the other dairies are as well. Subsidies from the federal government also play a role in this as far as how many gallons can be produced etc. similar to crops.

Can the excess be donated to a food bank?

In a word no. Unprocessed milk is not safe for human consumption. This would be a good way for the USDA to shut you down for good. Also, most plastic has been diverted to use to make ventilators, so keep that in mind too.

Any additional comments you want to pass on?

Key thing to remember is the processing and packaging plants are broken down; commercial/restaurant/school etc. They are all different. Right now we have finally caught up on the grocery store inventory issue we had initially it seems. The restaurant/commercial is having huge backlogs as a result of takeout/to go only, this reduced demand substantially, and as a result bulk buyers like Sysco have almost stopped taking deliveries. Those plants have been mostly idled. Other plants may be running full speed, but you must remember the lines at those plants are only set up to run for so long, and to produce certain quantities in specific containers. You cannot think of these places like other production lines where you could focus on a different part of the chicken/pork or beef by the day. The amount of time and money needed to convert the equipment, re-configure the line and train employees. Also keep in mind the employee part; if the virus breaks out and people at the plant are getting sick, they are not going to show up.

Farmers/ranchers are all feeling the pain right now, as you have seen chickens are being killed since the demand is down due to restaurant closures, vegetables are being plowed in the field and turned into a fertilizer. This is all due to a slowdown affecting the entire supply chain, the answers are not as easy as convert the plant, use cardboard instead of plastic etc. We will get through this, but we need normalization to commence at some point.