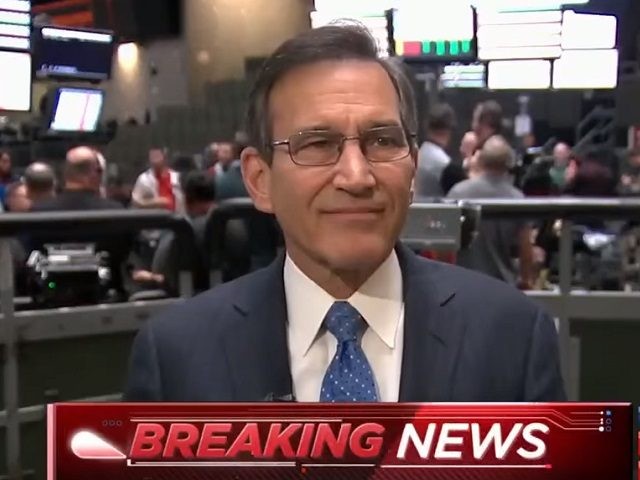 Rick Santelli is a commentator on CNBC who specializes in the bond/treasury markets. He usually contributes throughout the day as he reports on the swings in the market. Thursday, he made a complete and utter fool of himself and backed it up today with a halfhearted apology regarding the coronavirus.

Here is what he said Thursday:

“People are getting nervous, listen, I’m not a doctor. I’m not a doctor. All I know is, think about how the world would be if you tried to quarantine everybody over the generic-type flu. Now I’m not saying this is the generic-type flu, but maybe we’d just be better off if we just gave (the coronavirus) to everybody and then in a month it would be over, because the mortality rate of this probably wouldn’t be any different if we did it that way than the long-term picture,” Santelli said, “But the difference is we’re wreaking havoc on domestic and global economies.”

Maybe someone should check themselves in to the doctor for a foot in mouth disease exam?

Here is his apology, if you can call it that:

“Yesterday, during a segment on ‘The Exchange, ‘I said ‘maybe it would be a good idea to expose everybody to the coronavirus, maybe it would be better off for the economy, the global economy or the markets in general,’” Santelli said of his comment that sparked outrage and calls for CNBC to fire him. “It was the dumbest, most ignorant, stupid thing anybody could have ever said.”

“It was just a stupid thing to say,” he said. “It’s not appropriate in this instance and we are resilient, both in the United States and in the globe. That resilience will get us through. The idea of something so absurd, I apologize, and I apologize to everybody on the segment and all my peers at CNBC.”

So ok, a lot to unpack here but here we go. First off Santelli is your typical 90 day calendar guy, when the market is up all is well, when the market is down, he incites panic. He knows no other lot in life. He is paid to comment on the news and react to market swings but how can any sane human being spout off the vomit he did on live TV and think they got away with one? Give coronavirus to everyone….nice pal…how about those of us who lack a gold plated $0 out of pocket healthcare plan Rickster? How do you expect us to come up with the money for that? Or should the government just pay for it…since in some ways it sounds like a science project to you? As far as your comment about mortality….this virus is wreaking havoc in nursing homes, and hospitals, targeting mostly the elderly and those with weak respiratory/immune systems. So it sounds like your goal is to create a stronger human race….nice. As far as his apology goes, Santelli was obviously sat down by someone far higher on the pay grade chart than him, because what he said in his apology made even less sense. He tried comparing corona virus to smallpox saying you were encouraged to expose others to it, so they could get it, and get the vaccine.

In closing I will say this, Rick is not sorry, those are his true beliefs. He saw the market get very choppy and decided to white knight and declare “we need to get this virus over with because….my retirement!” His comments that this virus is affecting both the domestic and foreign economies is somewhat correct, but the reason people are panicking is because of idiots like you Rick. There could not be more misinformation spread about this virus, both in print, online and TV media. It’s being made out to be an instant killer, with the infected quarantined off and cut out of civilization. While there is no known cure or vaccine, it seems like quarantine and maybe some medicines are aiding in people surviving. Think about that for a minute, this bozo wants to infect everyone with this, knowing there is no cure, which will overload our hospitals and health care system, because again…his stock account. To make matters worse for Rickster, today the jobs report came out….and unemployment dropped yet again. Folks the underlying economy is doing just fine. We are in a small, cable ratings fueled drop in the stock market, that’s all. Go out to lunch, dinner, or go to a gym, church, etc. People are packing these places, yet the talking heads are talking about this virus 24/7. The NBA and MLB are warning people not to go to games, and to essentially shelter in place. Rick, you are not helping.

Rick, stocks go up, and down, the overall economy is not based on whether the “Dow is up or down.” I’m actually not surprised you blew your smoking hot take for all to see, you like to rile people up, you succeeded, now more people will sell off, because they don’t want to get burned. I am however disappointed in a fellow CNBC employee, Kelly Evans. She didn’t challenge your BS at all.

PS Santelli is a Tea Party guy, no real shock there.