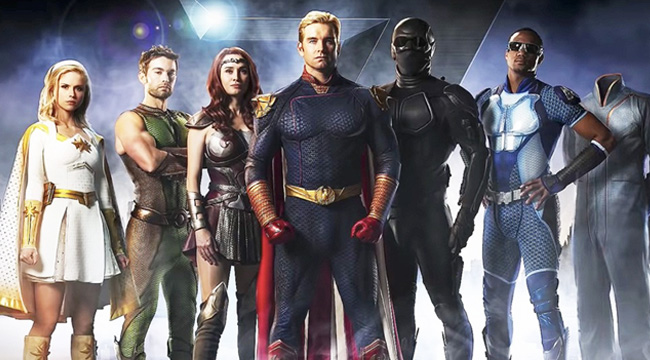 I did something this weekend that I rarely do, I binge watched Amazon’s new show The Boys. It was not quite what I expected. It is billed as regular people who fight superheroes run amok. Some of the plot points in it rely heavily on Evangelical Christianity and I want to comment on that part of the program. This post includes many spoilers for the show, as such you have been warned.

The main group of superheroes in “The Boys” are a twisted form of the Justice League. Instead of Superman, Wonder Woman, Green Lantern, Flash, Aquaman, and a few others, you get twisted versions of these characters with different names.

In the Amazon series you have the big seven heroes working as employees of a large corporation called Vought, whose interest is profit not justice. Everything they do is to keep up their presence on social media and merchandize the heck out of their heroes.

The first five minutes of the show introduces you to four main characters, Queen Mauve (Wonder Woman), Homelander (Superman), A-Train (Flash), and Hughie Campbell. Hughie is on the sidewalk with his girlfriend. Both are regular—non super—people. In order,

Hughie is horrified and shocked. Following a memorial service for the girlfriend, a corporate lawyer show-up at his house to offer a cash settlement in exchange for him signing a nondisclosure agreement. He is offered money in exchange for his silence about what happened. Hughie decided to exact revenge on the corporation that shields A-Train from any wrongdoing.

As the story unfolds, Hughie meets Annie January on a park bench and starts a friendship. They like each other in the present but neither talks much of their past. Annie was raised as an Evangelical Christian in the Midwest and finds that she has superpowers. Annie is new to town because she has been recruited to join “The Seven” upon the retirement of Lamplighter (Green Lantern). Hughie likes her without knowing that Annie is really the superhero Starlight. He discloses to her that he is getting over the death of his old girlfriend but avoids the cause of her death.

Annie is the most important of several gateways into this alt-universe version of Christianity that is found thru the first five episodes of this eight-episode series. The show lampoons much that is wrong with our faith and, sadly, it has at least some basis in reality. No denomination is singled out as the focus of criticism. The portrayal of faith in the show will be disturbing to many and rightly so.

The overarching religious entity in the show is a charitable organization called Samaritan’s Pulse (Samaritan’s Purse). The charity itself is not depicted in a bad way but some folks that have associated themselves with the charity are clearly more than hypocrites. They fake their faith as a way to purposefully manipulate the faithful. Chief among the charlatans in the group are a televangelist named Ezekiel and Homelander. Both are wolves that don the sheep’s clothing as necessary.

Ezekiel is first introduced in the program as a guy “hooking up” with two men in a club for people with superpowers. It is later that you see him on the stage preaching. Hughie tries to blackmail Ezekiel in a later episode with a video of the encounter in the club.

Ezekiel is emblematic of megachurch clergy and televangelists that are not accountable to anyone and do and say crazy stuff in God’s name. Sadly, we can all name examples of such abuses done in God’s name like needing a fifth private jet or building a hospital or a crystal Cathedral or whatever.

We also can name examples of sexual impurity among those clergy who say one thing and do something different in their own lives. The Catholic Church may be the poster child for this, but they are not the only folks with such problems. Such abuses can be found in every religious group whether they claim to follow Christ or someone else. Men are fallen and sinful and even those redeemed by Christ can fall into sin.

One obvious issue related to this subject is that many people will apologize for something when they are caught red-handed, but “apology” and “repentance” are two very different things. We are often willing to forgive people who apologize but doing so without them first repenting is a great disservice to them and God. Letting them off the hook without acknowledging that they need a changed heart results in no change in their behavior. This leaves them still in sin and out of fellowship with both God and their neighbor. How can someone in this situation be restored to fellowship with the church? They can’t; instead, people usually just pickup and go to the church down the street and join it with “no harm” and “no foul” or just stay home and quit the church altogether.

There are several recent instances of clergy admitting that they aren’t really believers and voluntarily leaving their positions, but sadly, many such clergy are “bitter clingers” to their position, salary, and expense accounts; they like the Pharisees of old, aren’t going to make it but also work to prevent others from getting into the Kingdom of Heaven as well.

What Ezekiel preaches is not the Gospel although the Gospel is talked about by others on the show. Steve Taylor’s lyrics “in it for the money as an idol show” come to mind. Ezekiel is a bona fide celebrity that reminds me of some in the Christian Music scene that had issues with moral failings. Sadly, that is a very long list.

Christianity is portrayed in this program as an archaic set of rules that are followed to give us salvation i.e. salvations is by our works. Christ and several Christian buzzwords are mentioned but the shepherds of Christ’s flock like Ezekiel live only to fleece the faithful. They know its not true but appeal to itching ears to empower themselves. Their message is not grace alone in Christ alone.

Homelander is shown as a callous, mass murderer that kills people simply because he enjoys it. He is a psychopath. Oh and a few episodes into the series they introduce him as an ordained clergyman. By that point in the show, it’s clear that he says it for ratings and makes no real claim to believe in anything but himself.

I think in episode 5 is when the faithful that paid $10K each for a meet and greet with Ezekiel are rebaptized by Homelander. Poor Hughie is held under long enough that he really could have repented before being let up.

Also, by episode 5, Annie has experienced a series of compromises in her values and is having a real crisis of faith. Annie is at an event sponsored by Ezekiel and is meeting with a group of fans. She is asked a question about premarital sex and Annie’s handlers persuade her to lie to preserve her image instead of answer truthfully. She falsely declares that she is a virgin and that girls should wait until marriage even though that is not true of her own life.

Annie begins the speech as written but departs from the script and says she is tired of the compromises and mentions that she suffered the indignity of being forced to have a certain male organ in her face. No blue dress but you get the idea. She then renounces her faith–as defined by this group–although she still believes in God. She then walks off the stage.

At one point, we find Annie in a church listening to the choir practice with a small orchestra.

In another scene, Annie encounters the Queen Mauve character in the bathroom. Queen Mauve says that I used to be like you, but I gave up my soul one piece at a time. Don’t let that happen to you. Someone here must be the goodie two shoes, and it might as well be you. Without knowing, it Mauve just rescued Annie from compromising yet again.

In the final episode, Annie finally has the backbone to do what she knows is right. Annie forgives Hughie for luring her to a meeting in a previous episode where she is shot by another character. Whether Annie does this as an expression of her faith or because she followed her heart in a Disney Princess sort of way is not fully answered. I think of forgiveness as a Christian trait not one associated with Disney Princesses.

It seems at the end that Annie retains some measure of a personal faith but without relying on the organized church that she grew-up with.

This program is way different than the comic book upon which it is based—which is probably a good thing. Take a look at these Wikipedia pages:

Amazon’s version is tamer than the comic books, but this program is not for most people. Frankly, I found myself hitting either the mute or fast forward button several times. Violence and profanity were expected with the M rating, but this show makes Deadpool look tame.

The sexual stuff is often disgusting and gratuitous. Drug use is central to the storyline. Many innocent people are wantonly killed in horrific ways by superheroes just to protect or enhance the corporate image. This show is not your typical Hollywood trope of all corporations are evil, but Vought certainly is.

If there was a rating north of M, this program would get it. It’s not for most folks although the way Amazon is promoting it, you probably wouldn’t understand it that way.

I don’t know if this program is a full-throated rejection of Christianity or just a rejection of the excesses that Americans tolerate from the pulpit. I got the feeling that at least one of the show’s writers grew up with an evangelical background.

Again, unless you were OK watching Deadpool, avoid The Boys. It is ruder, cruder, and really in your face but at least there’s no time travel sequence at the end.