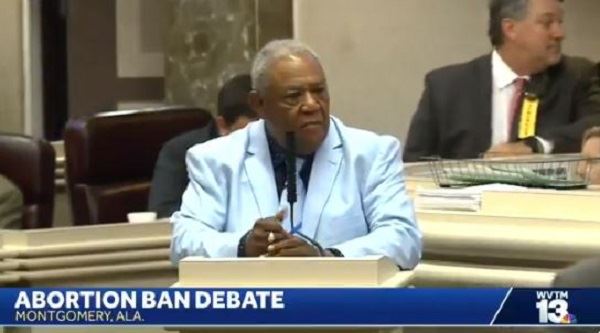 To be fair, he was talking about abortions, more specifically a bill that if signed into law would outlaw all abortions, unless the health of the mother (or do we call them a more binary “carriers” now?) would be impacted. Obviously this is a very highly charged issue but Rogers wasn’t done yet. He added “some children facing abortion could be retarded or half deformed.” Wow!

Despite his valiant argument for its defeat, House Bill 314 passed 74 to 3. Later, other principled Democrats weighed in too:

When HB314 passed the House only three representatives voted against it. A number of Democrats who had left the chamber have since changed their vote to no, so the updated vote is 72 to 26.

Folks think about it. Those words that you and I take offense to; namely, “killing them now”, caused 23 more Democrat legislators to join with John Rogers! Let that sink in for a moment.

But wait there is more… Donald Trump Jr called him out saying he made Virginia Governor and Blackface aficionado Ralph Northam (no friend of the unborn mind you) look like a moderate on the issue, as compared to Rogers who wants a master race.

I will say this, Trump Jr definitely lacks in moral department due to his leaving his wife and children for the former first lady of San Francisco Kimberly Newsome er Guilfoyle er Trump….I don’t know. Whatever she calls herself.

That being said, Roger’s statements are becoming far more mainstream in the Democrat Party. While the anti-abortionists are slowly winning the battle, Roger’s reaction is off the charts crazy. The scary part is not so much his opposition to the bill, which is his right, its being so out of touch.

First of all I doubt this country executes more than 100 people in a year. Truth be told, only a handful of states have the death penalty and carry it out anyway. Planned Parenthood, on the other side, aborts many times that number in a single hour in our state alone, let alone nationwide. Ironically the customers are mostly the same color as Mr. Rogers. Adding insult to injury, Rogers would rather call Don Jr a name, and an offensive one at that. However his words, when taken in full context, are cringe worthy. He talks of aborted fetuses as throwaways not fit for this earth, even going farther to correlate a stay on death row and outlawing abortion, are somehow related. Then he makes a statement that if a fetus is deformed or retarded they should be killed as well…ouch! What is more upsetting is the Democrats are radio silent on this one.

Mr. Roger’s Neighborhood must be the most frightening place imaginable.

The safest place a child should be is with his mother, but this guy wants it to remain the most lethal. This Mr. Rogers is all about human trafficking of the worst sort, murder for hire. The “fit” deciding who is “unfit” (to live). In exchange for reducing the black population of his state, his masters provide him with money and power.

Rogers is now serving in his 10th term in the Alabama House of Representatives, representing the city of Birmingham. He is 78 years old.

Rogers is a professional photographer and according to his bio on the state Legislature’s website, is the director of minority affairs for the University of Alabama at Birmingham.

Lest you think his comments are out of context, try this quote:

We were looking for clarification on his remarks and his thoughts on the national response, but our political analysts say anyone who knows Rogers and Alabama politics knows his comments aren’t unusual.

Our WAAY 31 political analysts, Dale Jackson and Waymon Burke, agree that remarks like this from Rogers are nothing new.

In conclusion, this guy Rogers should star in a film about why we no longer use lead paint in this country. No word on if he was popping Tide Pods or huffing glue between sentences.

Add Roger’s comments to those made about Obamacare and what a world we would live in. Your grandmother who has a cold…sorry ma’am we have no treatment options available. But get knocked up after a night of drinking and cut to the front of the line. We’ll take care of this problem for you! Service with a smile! Heck, if we were in Washington State, we’d even compost the little rascal for you. Given more time, Democrats will probably make abortion tax deductible. If you aren’t indoctrinated by our school system or way of life…I guess you should have been aborted as well. What a harsh thing to say, but this has been going on in our country for years now so I guess this is what it has come to.

People like Rogers are the worst, enjoy your lead paint and Tide pods this weekend Rogers!!!!

One thought on “State Representative John Rogers of Alabama…..You’re an idiot!”