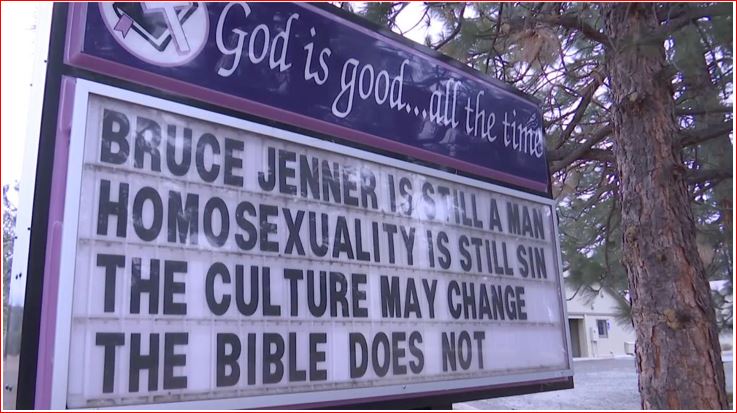 Lake Shastina is a little hole in the wall community northeast of Weed, California and south of the Oregon border. The area is full of old hippies from the 1960’s (and their descendants) and also a mix of farmers and people once associated with the logging industry. It is an eclectic mix of folks.

Lake Shastina finds itself in the news because the Truth is offensive to those that choose to embrace lies. In this case, a local church has put up a sign that has got a few pagans and Liberals up in arms. The purpose of such signs is twofold, give information about what the church is doing or what they believe—commonly called outreach. In this instance the Church sign reads:

The church’s pastor, Justin Hoke, said he expected “flack” regarding the sign’s message, but believes it is poignant because it “rebukes sin” and calls people to repentance.
“It is not possible to preach the gospel in short pithy statements. I have used this sign for seven years now to provoke reflection or make a strong point about a single truth,” Hoke wrote on Facebook. “Such as this one: ‘The culture does not determine truth, God does.’ … The funny thing is, I could have put those words up and no one would have cared. Why? Because it does not rebuke sin or call anyone to repentance. The church has lost its saltiness and I fully expect to get as much or more flack from the visible church as I am getting from the world.”
In that same Facebook thread, Hoke posted, “The response we’re receiving from this sign proves that it was posted way too late. If a conservative mountain farming community is no longer a safe place to call sin, sin, then is anywhere in this country still safe for real Christians?”

Three people organized a protest of the sign and now its national news. Why?

One protester, worried about what the church message conveys to youth, described the sign as “an amplified voice telling [those youth], ‘You’re wrong.’”

All three propositions are true so what’s the issue? Oh yeah, this is California so I guess I do have to defend each just because…

Statement One
Bruce Jenner is still a man. Here’s the offensive part, God made him a man. No manner how much Jenner has paid to have himself mutilated and pumped full of hormones, biologically and genetically he is still male.

That Jenner has mental and spirit problems is tragic. To be human is to be an image bearer of God. Jenner can’t hurt God so he attacks Him by attacking His image bearer, in this case himself. God is the primary victim of this and every crime, Jenner is a secondary victim to this rebellion.

Statement Two
Homosexuality is still a sin. Homosexuality is not only a sin in both the Old and New Testaments, per Romans chapter one, it is a judgement upon men for exchanging the Truth of God for a lie.

Homosexuality was common in the period when the New Testament was written. If you look at Paul’s arguments in Romans, in chapter one he takes the Greco-Roman world to task for rejecting God and then in chapters two and three, he takes on the Jews of his day that think themselves religious and concludes that they too fall short of God’s standard. Toward the end of chapter three he concludes in verse 23:

For all have sinned, and come short of the glory of God

As you continue reading, Paul lays out the case that we cannot save ourselves and only Jesus can save us. So while chapter one condemns homosexuality, the rest of the book presents the case that all people are sinners and need Jesus.

In his first letter to the Corinthians, 1 Corinthians 6: 9-11, Paul points out “And such were some of you”. His point is God can save and redeem even the worst of us.

Know ye not that the unrighteous shall not inherit the kingdom of God? Be not deceived: neither fornicators, nor idolaters, nor adulterers, nor effeminate, nor abusers of themselves with mankind,
Nor thieves, nor covetous, nor drunkards, nor revilers, nor extortioners, shall inherit the kingdom of God.
And such were some of you: but ye are washed, but ye are sanctified, but ye are justified in the name of the Lord Jesus, and by the Spirit of our God.

Statement Three
The culture may change but the Bible does not. God doesn’t change. You can look at creation and see that there was a designer (Romans 1) but to have a relationship with Him requires special revelation. God’s special revelation, the Bible, is the standard by which we are measured and as stated above, we all fall short. That doesn’t make His standard wrong, just us.

Jesus Christ the same yesterday, and to day, and for ever.
Hebrews 13:8

All scripture is given by inspiration of God, and is profitable for doctrine, for reproof, for correction, for instruction in righteousness: That the man of God may be perfect, throughly furnished unto all good works.
2 Timothy 3:16 -17

The point is not to call everybody wrong but to call people to repentance. Repentance means that you are sorry for your sin; turn around, you’re going the wrong way.

Stop running from God but instead embrace Him. Jesus is the only way to the Father.

The church message is not a message of hate, it is a warning that people that are going the wrong way and that they need to repent.

There is a way which seemeth right unto a man, but the end thereof are the ways of death.
Proverbs 14:12

Which is more loving, seeing someone heading straight to hell and say nothing or warn them to turn around before it’s too late.