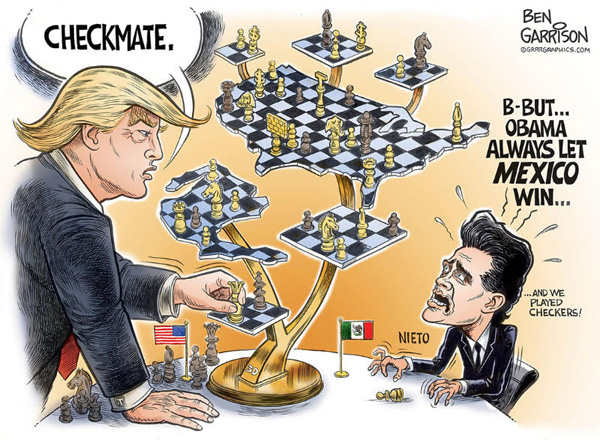 Folks I’m sensing one of those scenarios—the attempt to impeach of Donald J Trump—unfolding before our eyes now. Granted this is speculation but let’s connect some dots.

1 The conventional wisdom this election season has been that Democrats will clean House and Senate and take Congress away from evil Republicans and restore it to its rightful owners; the Democrats.

2 Robert Mueller has rallied the Dems for the last two years on Russian collusion but it is clear that he will not be delivering the goods to Impeach Trump.

3 Democrats claim that they never let a good crisis go to waste—especially one that George Soros is willing to finance—and George has found a new cause of late that is sucking-up much media time going into the election.

4 Democrats see open borders as a way to expand their control of the political apparatus of the United States. They want illegal aliens to vote in our elections to keep them in power. Every time someone wants to limit elections to US citizens—which by the way is the law in every state in the Union except maybe California—Democrats are the first to run to some judge of their own choosing that claim voter suppression. Democrats want illegals and felons to vote. Democrats want rampant voter fraud. Democrats want chaos. Democrats rule by dividing people into groups and then pitting the groups against each other.

5 The Guatemalan Invasion is a trap that is being set for Trump. It is organized and paid for by folks in the United States including George Soros. The Dems figure that they have Trump boxed into a corner where either way Trump loses and they win. They see no scenario in which he wins.

If Trump caves and lets these folks into the United States then he will forever have to give up his promise of the wall. He will be called a hypocrite for campaigning on border security and then collapsing like George W Bush when the rubber hits the wall.

Or, Trump really does call out the troops to protect the border. Trump has reportedly said he will do this. In this instance, Democrats are hoping the Trump does what he said. They will call him hotheaded and move to impeach him immediately because they will maintain that he doesn’t have the right to deploy troops within the borders of the United States. Democrats will cite the Posse Comitatus Act as grounds saying the President doesn’t have the legal authority to deploy troops.

6 Using Posse Comitatus Act is thus their Plan B to remove or severely cripple Trump. The House will Impeach him whether the Senate later votes to remove him or not. They believe that they have the votes to remove Trump but if not, so tarnish him that he won’t run again in 2020. They don’t want to defeat Trump, they want to destroy him.

The only problem with the above scenario is that the Democrat Wave that has been forecast for the last six months is turning out to be “vaporware”. The political polling folks are collapsing their predictions about a Democrat Wave.

Two months ago, Democrats were believed to be picking up four to six Senate seats and now the opposite is being said. Republicans are likely to pick-up more seats in the Senate.

In the House, two months ago, Democrats were expecting to pick-up at least 60 seats but now there is doubt that they will take back the House. Republicans are expected to lose seats this cycle but may be able to maintain control. Without control of the House, no impeachment proceedings can be started.

The catalyst for this change in political fortunes appears to be the direct result of the Brett Kavanaugh hearings. Thus Dianne Feinstein has singlehandedly saved the Republicans for themselves.

The Blue Wave Was a Lie, But It Could Be Even Worse for Democrats

Polls Could Be Missing a GOP Surge. Here’s Why

DHS: We Can Confirm There Are Criminals, Gang Members in the Illegal Caravan

Note: Democrats dispute whether Soros is paying for the “refugees” but he funnels money thru many organizations dedicated to open borders. Someone is paying for food and supplies for a group that yesterday was reportedly about 14,000 strong to walk over 1,000 miles to the US border. Talk about a community organizer.