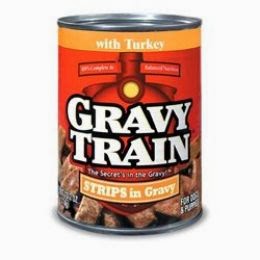 A headline caught my eyes this week and I knew I had to do more in depth research, “JM Smucker Company announces global pet food recall.”  Ummm, why is a jam and peanut butter company recalling pet food I wondered aloud?  I’ll get into this a little more later.  As I continued reading the article I figured the dog food may not have been heated/mixed/prepared correctly…wrong, they added pentobarbital….yeah as in the lethal injection death penalty drug.  For those of you in Soviet California, other states use lethal injection to wipe clean the earth of scum, you guys just let them out of jail with a slap on the wrist.  But back to my point, how in the world does pentobarbital get introduced into the food supply of a huge company?  I mean I thought the point of buying dog food was to keep Fido alive not kill him/her or if you’re in California your gender neutral dog.  The brands recalled were; Ole Roy, Kibbles n’ Bits, and Gravy Train, all wet dog food products only.  Besides the fact that wet dog food is basically processed diarrhea I still honestly wonder how in the world pentobarbital was introduced to the supply chain.  What was it even doing in the factory?  I will explain below.

The FDA has this to say regarding ingesting pentobarbital “Consuming high levels of pentobarbital can cause coma and death. However, pentobarbital present in the withdrawn products is at a low level unlikely to pose a health risk to pets.”  You should feel much more assured now, it was just a low dose so likely nothing would happen to your dog.  What a line of crap.

Editor’s Note: Our readers in the Orient should understand that this FDA pronouncement does not consider the cumulative effect of consuming dogs or canine products over a long period of time. Participants in the recent Winter Olympics were unlikely to have been exposed to enough canine products during their time in South Korea since each athlete was issued 37 condoms by the International Olympic Committee and thus are presumed to have been too occupied doing other things to suffer ill effects of canine exposure.

Smucker had an even better one, get a load of this “We take this very seriously and are extremely disappointed that pentobarbital was introduced to our supply chain,” Barry Dunaway, President of Pet Food and Pet Snacks said in a statement.  “We will continue to work closely with our suppliers and veterinarians to ensure the ingredients used in our products meet or exceed regulatory safety standards and our high-quality standards,” Dunaway continued.  “Above all, we are a company that loves pets and understand the responsibility we have in providing high quality food for the pets our consumers love.”

Literally this Dunaway has admitted nothing other than they are embarrassed; yeah like a child sorry they got caught, not sorry for what they did. Then he goes on, but don’t worry we will work closely with our suppliers (sounds like you should terminate the contract), veterinarians (But notice not the Vet you will be taking your sick dog too) and they still love your dog (they love your $$$ and hope their ignorance doesn’t kill it).  Clearly Smucker’s legal team wrote the press release and Dunaway signed his name. The kicker is this waste of human flesh is a president of the pet food division, like he actually has major responsibilities.  Apparently, there is no brain cell requirement to hold a high-ranking position at JM Smucker Co.

The over laying issue here is about 10 companies control 90% of the market on most food and other essential products we use in our lives.  Best examples; you hate Pepsi because they are evil and their soda causes diabetes, so you reach for Aquafina or Quaker Oats instead…PepsiCo makes those products.  Gatorade, Tropicana, or Lays….yup all owned PepsiCo.  Coca-Cola makes Coke, but did you know they make Dasani bottled water?  Or Fairlife milk?  Campbell’s Soup tastes awful, so I will grab a V8 instead…both owned by Campbell’s.  MARS, the maker of M&M’s also owns Banfield Pet Hospital…yeah.  I am attaching a graphic to show the depth of this.  The point I’m trying to make isn’t about a monopoly or anything it’s that the Stock Market/Wall St. are so demanding that companies have no choice but to buy other brands.  As William has said, it’s a 90 day cycle you need to beat last quarters numbers, or the same quarter from last year’s numbers and if you don’t there are consequences.  These consequences sometimes result in buying of other brands, most often though layoffs occur. 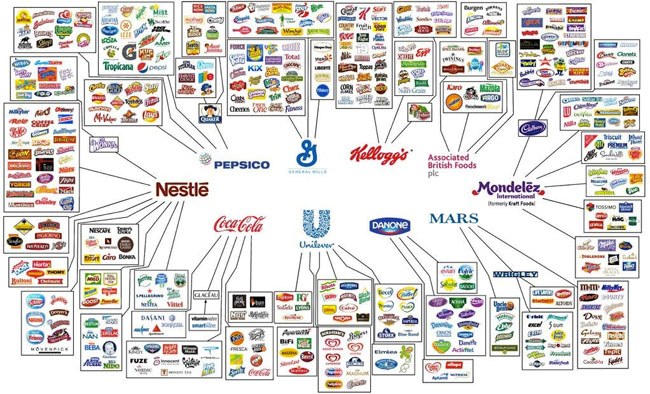 You may remember the old Campbell Soup plant in Sacramento, its closing had nothing to do with productivity, it was closed because it was old and the County wouldn’t pony up major tax breaks so they left. Mondelez International moving Oreo production from Oregon to Mexico had nothing to do with streamlining of the company it had to do with the input costs are less in Mexico then the USA.  These are done to appease Wall Street investors and big banks and investment firms.  Uncle Pennybags and his brethren want their quarterly divided or there will be hell to pay.

Back to my point, when one of these conglomerates buys a brand, they destroy it in the name of saving a few dollars.  Look at Annie’s, it’s an organic line of food designed for children, it was bought by General Mills, they stripped out the natural ingredients and now the product is trash.  Look at McDonalds, what used to be an all-beef patty, is now a frozen hockey puck of mystery meat, and a bad tasting one at that.  These examples underscore that when you live in a 90 day cycle and anything necessary to drive profits can and will be done.  Look at what Coke did years ago, replaced cane sugar with corn syrup, the effect has been great, it was more addictive and tasted the same, and sales soared.

Enough rambling, back to Smucker; the problem now is companies used to actually make their products now they just mix ingredients together and package them.  A good example is Campbell Soup, I used to know an employee there, and he told me the ingredients were all locally sourced (within 5 hour drive) and were mixed and cooked at the plant.  That practice ended a decade ago.  I’m sure it is the same at Smucker, their ground meat is from one country, the gravy from another, the bits from another, they show up on a flatbed truck, in unlabeled boxes, you throw them into a mixer and voila!  Ole Roy wet dog food is created, can it, label it and it’s off to the local market.  Not sure where the pentobarbital gets mixed in but it’s in there somewhere.  The bigger issue is corporations like this have numerous suppliers for the same product so there could be 5 that supply the gravy mix, and it all comes in unmarked boxes making it impossible to know what supplier/country of origin it came from.

The point of this article isn’t to scare you, most all corporations make food that is completely healthy and safe to eat, but “hitting the numbers” causes corporations to use lower quality ingredients or layoff the food safety inspectors, and this is where these problems lie.  Conagra Foods, maker of Chef Boyardee, laid off most of their food safety inspectors, and hmmm 2 months later issued a global recall of 100k cans of pasta, just saying.

PS Mark Cuban had a bad week…….maybe time to dance on his grave!