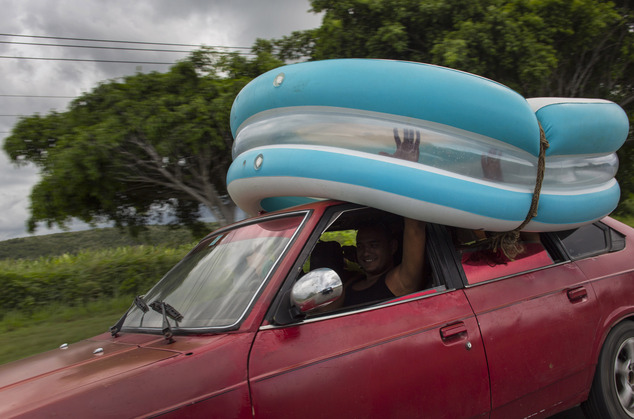 A story in the news yesterday is gut-splittingly funny on several levels but before I get there, here’s my background on this issue.

During a lazy summer day a few months ago, I met with an occasional contributor to this very blog near the Toys R Us in Elk Grove. As I was minding my own business just walking through the parking lot, I beheld a sight that I shall never forget.

A small car passes me heading away from said toy retailer that is driven by a woman with a most unusual load on the roof of her vehicle. She has one hand on the steering wheel of her little Toyota and the other out her open window holding onto a plastic swimming pool about fourteen inches deep and six or seven feet around. No straps or other safety devices were holding the pool onto her car, just one hand out the window.

Needless to say, I was shocked that anyone would be so brazen (and stupid) to endanger others in her clearly selfish quest to get this pool back to her house. Clearly a gust of wind or a passing vehicle would easily be able to cause her to lose control of the pool and drop it into the middle of the road thus causing and accident and rendering the pool useless.

Clearly this woman was daring the laws of nature and physics to doom her cargo.

Apparently this was not an isolated incident.

A Wisconsin woman is facing charges after her 9-year-old son was tied to the roof of their minivan to help hold down a plastic pool.

Prosecutors allege 28-year-old Amber Schmunk had her son hold down the molded pool they’d just purchased because it wouldn’t fit inside the van.

Boy Tied To Minivan’s Roof To Hold Down Plastic Pool

Schmunk told cops she “had no way to strap it down so she had her [son] climb on the roof to hold it down while she drove,” and later said she did strap the boy down inside the pool, according to the complaint.

Perhaps a rope around his wee ankle to keep him connected to the pool like a surfer to his board?

Once I saw her name, I thought, did you ever notice that in books like the Bible, that a person’s name often describes a characteristic of their personality? Her name looks a lot like a word you may know: Schmuck. Per the Internet, “the definition in American English is a pejorative term meaning one who is stupid or foolish”. In this case if the shoe fits…

Oh, no surprise that no Mr. Schuck is mentioned in any version of the story that I can find.