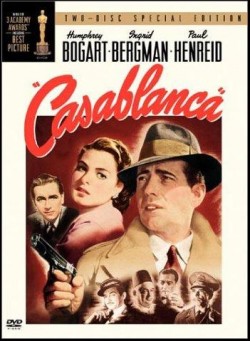 One of the most memorable lines of the movie Casablanca is, “We’ll always have Paris.” This line refers to the time in Paris when Rick Blaine (Humphrey Bogart) had a summer of love with Ilsa Lund (Ingrid Bergman). The only problem was that Ilsa was married, but not to Rick. Yeah, the back story which is shown in the movie as flashbacks ultimately boils down to adultery and poor judgment. Just to make their love affair ok with the audience, Ilsa begins their romance with the belief that her husband is dead.

When I heard what President Trump did yesterday with the bogus global warming agreement that Obama entered us into in Paris, this movie line came to mind. What a shock it was to the Liberal establishment—including both the mainstream media and Hollywood—when they learned that they won’t always have Paris.

President Obama played the harlot and entered into illicit relationships with many of the world’s evils. Obama was a lover of thugs, murders, and charlatans. Obama was hell-bent to reduce the prominence and prestige of the United States. Obama was fine letting both Iran and North Korea advance their nuclear weapons ambitions. Obama was fine with the genocide of Christians in the Middle East. Obama even made sure that our country imported huge numbers of Muslims with no screening or background checks and then placed them in areas of the country without coordinating with state and local officials. Obama refused to enforce the laws on the books to protect our borders and citizens. He also hamstrung our economy with regulatory burdens and federal overreach—mostly via regulations. He also unilaterally entered us into many international agreements without following the Constitutional requirements for such agreements or doing what was in the best interests of our nation. In short, he violated his oath to protect and defend the United States from all enemies foreign and domestic. In fact, he did exactly the opposite.

The Paris agreement on global warming is “junk science” of the worst sort. It is based on a number of false premises not the least of which is a false view of that humans are somehow responsible for controlling the climate.

Much of the argument surrounding global warming “science” revolves around carbon. Carbon in our environment has become viewed as something bad. Believers claim that releasing carbon—often via fossil fuels—is bad. Yet these same folks ignore all the natural sources of carbon in our environment. Can anyone say, “Volcanoes”? Oh, these are the guys that love trees, right Al Gore? So if nature is so great, why is it that you so-call environmentalists are the first folks screaming about forest fires? Lightning causes many fires—especially in remote regions—and the natural thing to do would be to let them burn. Eventually the fire would go out. It would either run out of fuel by burning everything up or be doused by water when it rained thus being deprived of oxygen.

Even public school children know that much of the world used to be tropical from pole to pole. The world that we live in now is a virtual desert compared to what it was once like when dinosaurs roamed the world. Plants were everywhere and in abundance. Plants are made primarily from carbon. Trivial question Al Gore, which animal released more methane gas Apatosaurus or Bovine?

By any metric, there is less carbon in our world now than in the past. This being undeniably true, what is the real issue behind global warming?

Philosophically, it’s simple to see. However, before I go on, just remember that believers in global warming and Liberals in general cannot be persuaded by facts. They have no use for them. They are into emotions and have no consistent and coherent way of looking at the world. They are fragmented in their inner being and thus when they look at the world around them, all they see are fragments. Some fragments they embrace and others they despise or ignore. They cannot see the whole because they have no framework to reassemble the broken pieces into their original form. Sadly, when their Creator tells them that they are broken vessels made in His image they reject His counsel. Rejecting the Creator has consequences. Instead of loving their Father in heaven they hate him and anything made in His image.
They hate:
• God—idols, false gods, lovers of self
• Themselves—suicide, transgenderism, body mutilation
• Others made in His image—abortion, murder, genocide
• His creation—pollution, erosion, cruelty to animals

Despite their brokenness, men still bear the image of their Creator. But God is not just our Creator; He also sustains and controls His Creation. Nothing happens to us or our world that is not in accordance with His will. This is another point of contention that I have with the Paris accord folks. This is God’s world and He controls it. It is hubris to think that we can do anything that meaningfully impacts the fate of the planet or its climate.

The believers of things like the Paris accord are worshipers of the creation and not the Creator. Their god is Gaia—Mother Earth—not YHWH.

Such ideas as Paris are a feeble effort to usurp God and replace him with man as the ones controlling the climate—as if we really had any power to do so. Such an assertion is arrogant. Man’s pride was the original sin as it was Satan’s.

President Trump is right in his contention that this accord is trying to put us at a competitive disadvantage to other nations. His job as President is to do what is best for our country. Christ is the ruler of all nations—King of kings and Lord of lords. Trump is our President because right now that is God’s will for our nation.

I’m glad that we have a President that is actually tearing down the strongholds of the enemy. God bless you Donald Trump.