I get bombarded with a plethora of junk mail each week. The other day I spotted a slick, glossy publication from the City of Elk Grove in amongst my pile of mail. On the cover are two items that together make what can only be an underhanded “in kind contribution” to the YES on Measure B campaign. 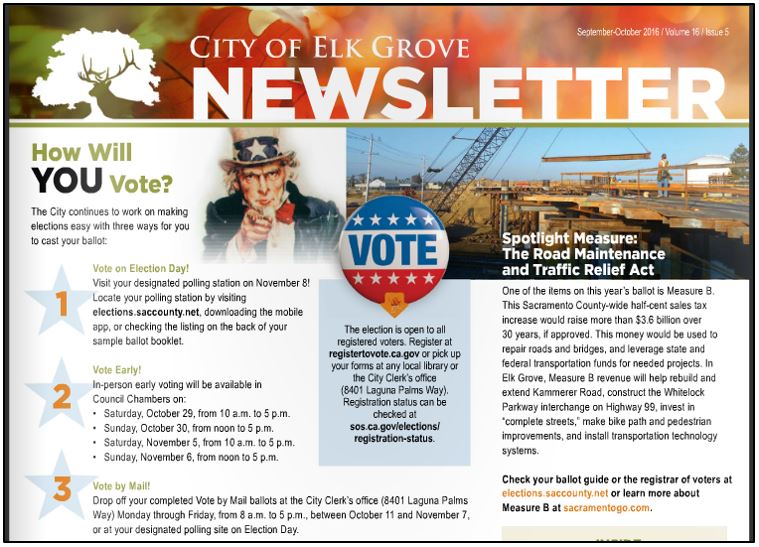 First was an article that claims that California now has early voting. Really? Until recently, I have been involved with various political groups that claim to be the guardians of public good—at least from a Conservative point of view—and I have never heard a peep out of anyone that California was adopting early voting. I know that in two years, we will have same day registration but early voting too? This is a bombshell announcement; however, the usual suspects are mute on this. California seems to want more voter fraud to be committed more easily—at least as long as it benefits the party in power.

Next to this voter news on the newsletter was a plug for the Measure B campaign.

So we are told where to vote and what to vote for, seems like a plug for Measure B in my book.

Sith Lord says that this is not a Texas style, full blown Early Voting System. Instead, Sacramento County Elections is trying voting at three locations in the county during week-ends. Voters will get one-time absentee ballot. They can then either vote on the spot or take ballot and return via snail mail or drop at a polling location later. Sith Lord was concerned about ballot security and county elections was not forthcoming about any chain-of-custody issues.

This is reportedly a trial program that will be evaluated later to decide if it should be continued.