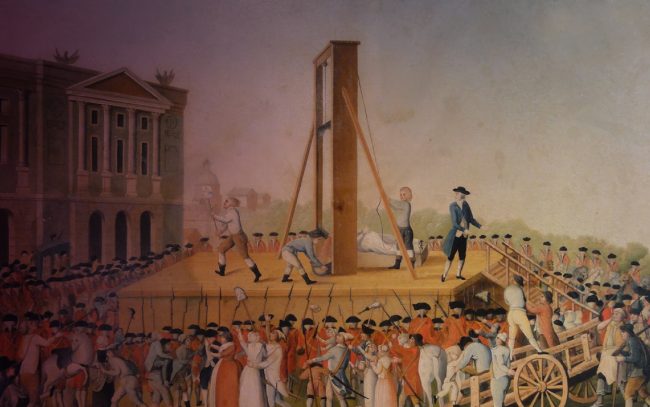 Yeah, there was a war and a king, that’s about the extent of the comparison; after that the whole idea crumbles rapidly. But why let the facts get in the way of a good story?

The French Revolution was great in the eyes of Liberals because first and foremost, they ran those evil Christians out of the country or executed them on the spot. The French also killed off their version of the one percenters and pretty much everyone else that owned a business. Just like their new friends at ISIS, the French cut-off people’s heads and the Liberals admire that. They had peasants with pitchforks; Liberals have Occupy and Bernie Sander supporters to fill the same role. Everywhere the Liberals gather, filth, crime, censorship, and suppression of opposing ideas can be found. This too is modeled on the idyllic French.

The French had Napoleon; Liberals have Presidential Executive Orders, a living Constitution, and judicial legislation.

To lift a phrase from Rod Serling, their boundaries are that of imagination. “Who knows what evil lurks in the hearts of men?” The Liberals do; and they flaunt it in your face and your living room every chance they can.

All this makes watching the Democrat Convention this just a bit more entertaining.

• Trump can’t have a wall but the Democrats have one four miles long around their convention (and most of their multimillion dollar mansions).

• Sanders supporters are trying to storm the convention even after their beloved leader sold them out.

• Sanders signs are confiscated from delegates but somehow that’s not censorship.

• Democrat leaders are apologizing that 21,000 emails were leaked that prove the fix was in on Bernie and they hate Jews and homosexuals. They aren’t apologizing for the contents of the mails just that they were leaked.

• No America flags are proudly displayed only those of Palestine and the former Soviet Union.

• The Convention is characterized by filth, traffic jams, a horde of protestors, and other nonsense.

• 61 speeches into the event and still no mention of the threat of ISIS.

• Featured speakers at the Convention advocate the indiscriminate killing of policemen, yeah, those same guys keeping the riffraff out of their convention.

Like the French that started the Revolution, the conflagration that has been fed by Obama, Clinton, and Sanders may very well get away from them. Instead of a path for victory in November, it could very well be their undoing.