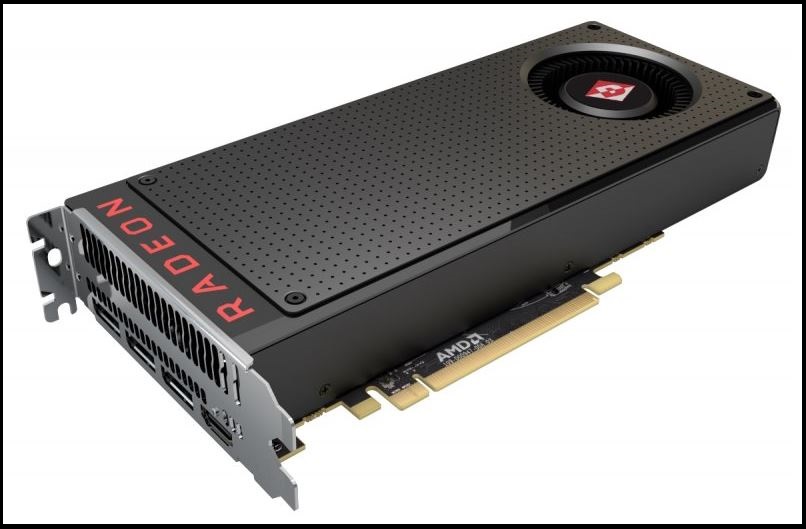 I went to “Cho- Choo” Fry’s in Roseville last week-end and bought their last AMD 480 video card. It was made by Diamond.
Link Fry’s: Diamond AMD RX 480 8GB PCIE GDDR5 Graphics Video Card
(For those that don’t know, AMD and NVidia make video chipsets and sell them to various manufactures that customize them and sell them under various brands.)

This is the super-duper video card that has very high specs even when compared to cards costing more than twice as much. (NVidia’s comparable version is GTX 1060.) The card has 8 GB of video memory and this particular model has three Display Ports and one HDMI connection.

Like most video cards, this one takes up two expansion slots on the motherboard and it is long, almost ten inches.
Diamond Spec Sheet
Diamond Video Card

When the Display Port to DVI cables arrived, I installed them to the computer and nothing happened. The cables did not seat properly on the video card. After a visual investigation, I determined that the video ports on the back of the computer were too close to the metal support between the slot openings on the back of the computer case. (If you recall, the video card is two expansion slots wide.) I had two choices, either cut the metal support on the case or try a different set of video cables. I opted for different video cables. I swapped the cables that I bought on Amazon with some older ones at work. My work computer is happy with the new cables and the computer at home is happy too.

The other challenge was getting the video driver to install. Simply downloading the driver from AMD and clicking “RUN” was a miserable failure. To make it work, download the driver. Uninstall your existing video driver. Then in your Download folder, right click on the driver file and select “Run as Administrator” or the equivalent.

Now I just need my son to put it to the test when he gets back with from his summer trip with Grandma and Grandpa.