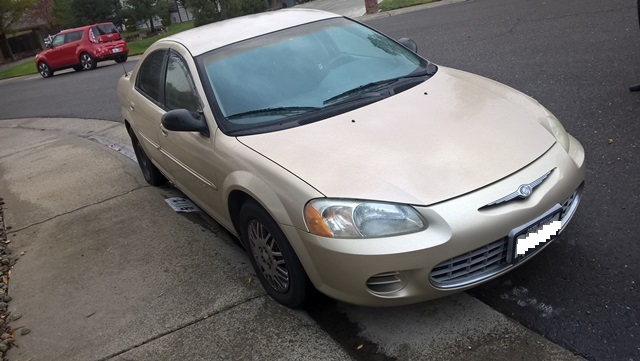 My wife spends too much time on social media. A few weeks ago, she found this car for sale on Facebook. Yeah, not my first choice either but the car was priced to move at $800.

We ended up contacting the owners. The car was drivable and had some cosmetic issues but to did run. After agreeing to buy it, we did have to remind the owners that state law requires the seller to get the vehicle smogged. Not surprisingly, it failed the first time on visual inspection. The owners replaced a hose and then go it to pass the emissions test.

We paid them for the car and then my wife went on the internet to make an appointment at DMV.

Our appointment was for 9:10 AM. When we got there, the line was literally out the door. There were 12 to 18 people just waiting to get into the building. We got in the appointment line—which was much shorter. After waiting a few minutes, we got to the check-in counter and told the lady why we were there. She gave us a form and clipboard and we waited our turn. A few minutes later, my wife and daughter were at the counter doing the paperwork for the title. After paying fees, taxes and registration, my daughter was out $166 on an $800 car and we were leaving to go home. The whole process was over in about twenty minutes.

I know state workers want to spend time with their families on Thanksgiving so considering that they were shorthanded, I thought things went well. Moral of the story, make an appointment; it will lower your frustration level and save time.