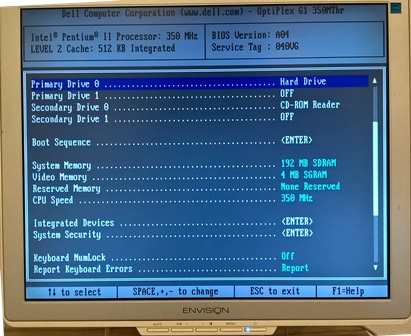 People think I spend all my time documenting the exploits of the Just Us Brothers which just ain’t so. I spend most of my day with computers but mostly I’d rather be building them.

Recently I had to make a new computer for my daughter. She is an aspiring teacher about to enter her first year instructing third graders. I went to visit the classroom and found that the student computer in her room was a veritable antique. It was a 350 MHz computer with 198 MB of RAM running Windows 98 with a Novel network client. It was not connected to the school’s network. It was clear that this private school was living off the donations of others and needed some help.

I did a lot of research and decided that my best bang for the buck would be to get an AMD A8 processor—since it had CPU and video on the same chip—and then get a compatible motherboard and 4 GB of RAM.

I wanted a 32 bit version of Windows 7 as I deemed it would be the most backwards compatible. I went to my local Fry’s Electronics and bought these items plus a DVD Writer for $15. My budget was $200 and I spent $222 including tax for the four items that I purchased.

The computer was housed in an old case with a 430 watt power supply that I had out in the garage. Everything when together well until I tried to install the operating system and then the BSOD (blue screen of death) appeared about 14 percent of the way through the installation process. I tried two different hard drives and got the same result. Not knowing if the drives were bad, I had my wife pick up a new drive at Fry’s. The ones at my house were living for many years in the garage so they might be bad…

My wife got a 1 TB drive for about $50. I installed that and hoped for the best. BSOD.

I tried a different DVD drive and got the same result. BSOD.

A that point, I removed part of the RAM, and tried the installation with only one 2 GB stick of RAM. The installation worked! I then tried to install the drivers from the motherboard DVD. BSOD. Finally, the computer refused to boot into Windows; even after trying all restore points.

I then ran the memory checker on the Windows DVD. For the first time ever, the on screen message said that I had a hardware problem. I don’t run that utility very often but that was a disturbing result.

Instead of taking the time to troubleshoot the motherboard, CPU and RAM, I decided to return the whole mess, get a store credit and start over.

I checked Fry’s weekly ads and saw a motherboard/CPU combo for about $222. It was and Intel i5 with onboard video and an ASUS motherboard. I decided to go with this since it was $75 cheaper to get this combo than purchasing the items separately. I then had to get a 4GB memory stick. This set-up cost me an additional $81. (Of course the Fry’s closest to my house did not have the CPU in stock so I had to run to Roseville and get it there.)

I took everything home and installed it in the case. I turned on the power and surprise, it booted up into Windows 7. Yeah, the Windows install created on the AMD processor booted up on the Intel motherboard. (By the way, this has worked every time I have tried it. It’s a testimony to the diversity of Microsoft.) After a few reboots to load additional drivers, I installed the network drivers from the motherboard DVD and ran Windows update.

The hardest part was finding a 32 bit copy of Office in my house. We all use 64 bit programs when possible. I found an unused copy of Office 2010 and loaded that.

So now my daughter has an up to date computer. The computer even has the flag in the bottom corner asking if I wanted to upgrade to Windows 10. My own computer doesn’t even prompt me for that.

My take away from this is that AMD has a quality control problem. Anybody can manufacture a motherboard for their processors but whether it works properly or not is completely out of their control. All the AMD motherboards for which I could find reviews for the A Series processors were in the same situation. 60 percent of the reviews rate the motherboards as good and the other 40 percent were reporting that the boards were junk. AMD needs to get this issue in hand.

Oh, all motherboards mentioned in my review are by ASUS.