Tom Cruise is not known for many movie lines but arguably his most well-known is “Show me the money”.

When it comes to the Park brothers, money is often in, under, and around their activities.

Getting details about the Parks and their financial transactions is often a difficult knot to unravel. It is however a fruitful area of research. They have been involved in many political operations and activities that don’t often see the light of day. In fact, illumination causes their operations to run for cover in much the same way as cockroaches do when the light is turned on.

The more I learn about their dealings, the more comparisons I make between them and another famous political pair; namely, the Justice Brothers—Al Sharpton and Jesse Jackson.

Yes, George and Aaron conduct shakedowns, run political black bag operations, and even have expense accounts paid by others.

You will seldom find their names on campaign finance reports because they often use other consultants as conduits for the cash but every election cycle they come up with new and ingenious ways to get their cut. Sometime politicians get favorable blog coverage or unfavorable depending on whether they pay for protection. Sometimes Aaron will manage your campaign for you but be warned, he sometimes forgets to pull the pin before he tosses the grenade.

Aaron’s name only appears on one electronic campaign filing with the Secretary of State’s Office. Here is the reason why:

Aaron sent this mailer to registered voters in the district on behalf of his candidate, Clint Parish. His opponent in the race was a sitting Superior Court Judge, Dan Maguire. Here are portions of an article about Maguire’s reaction to the mailer.

Now the race for the judgeship, which generally eschews such personal attacks as unbefitting of the judiciary, has taken a turn into the kind of nasty and divisive politics that typically befalls other political races.

“Unfortunately, my opponent Clint Parish has resorted to the worst sort of gutter politics,” Judge Dan Maguire told the Vanguard.  “His mailer is recklessly false, and includes charges made up out of whole cloth.”

“It’s deplorable when any candidate resorts to such tactics, and unthinkable to imagine that a person comfortable spewing such lies could be a judge,” Judge Maguire added.

Maguire responded to each accusation in the flyer

In a statement to the Vanguard, Judge Maguire said, “The Protocol Foundation was a 501c3 created to help to relieve the taxpayers of paying for things like trade missions, dinners for visiting diplomats, etc.”

“I had no role in creating it or disbursing its funds — it was an independent body with own its board,” he said.  “One of my jobs as lawyer for the Governor was to help respond to Public Records Act requests, which is why I was quoted in articles sometimes.”

Judge Maguire responded, “I had absolutely no involvement in the decision to commute part of the sentence imposed on Esteban Nunez.  I learned of it in the newspaper.”

Corporate Fraud
What is it with the Parks? Ever notice that they always accuse their enemies of fraud?

In a more bizarre charge, the mailer purports, “Dan Maguire was involved in a sordid case of corporate fraud that involved payment of bribes in Russia”

The Judge adds: “The case was just handed down recently, and has nothing whatsoever to do with me, except my former firm was a defendant.  My old firm prevailed.  My firm had over 200 lawyers at the time, and many offices, and I had absolutely no involvement in any of the facts in the case.”

Judge Maguire responds: “I was appointed through the same merit-based peer review as every other appointed judges.  I had no knowledge or involvement in the Esteban Nunez case.”

At this point, Deputy DA Clint Parish has not responded to the Vanguard’s request for substantiation.

The flyer was a hit piece in the worst way. Nothing was true except that the judge was appointed near the end of Arnold’s term as Governor. The flyer was paid for by Clint Parish for Judge, Aaron’s client.

Parish fired Park Consulting, the firm led by Placer County political operative and blogger Aaron F. Park,for the mailer that sought to tie Maguire to corporate fraud and bribery of Russian firms while working for a Colorado law practice.

After releasing the statement Thursday, Parish said, “There was no evidence that (Maguire) participated in bribes. I regret putting that in the mailer.”

Aaron Park, the owner of Park Consulting, said while he stands behind the content of the mailers, “it’s people’s perception that matters more than the truth.”

Please note the use of the plural in this quote.

“I don’t have any information that he (Maquire) worked on that case. I trusted their opinion, and I definitely shouldn’t have,” Parish said of his former consultants.

As a result of public backlash regarding the mailer, Parish lost some endorsements, including his boss, Yolo County District Attorney Jeff Reisig, and Yolo County Sheriff Ed Prieto. He also lost the endorsement of the Yolo County Republican Central Committee.

The State Bar Court has issued a public reproval of a lawyer who falsely accused his opponent in a June 2012 judicial campaign of being involved in a bribery and corporate fraud scheme.

The order disciplining Clinton Edward Parish, 43, is scheduled to go into effect Feb. 26, and requires him to complete State Bar Ethics School within one year and pass the test given at the end of that session. The order may be appealed to the California Supreme Court.

Parish had been a Yolo County deputy district attorney when he ran against Judge Dan Maguire in the 2012 judicial election. Not long after his landslide loss, he left Yolo County and starting working in Tuolomne County. According to the State Bar, he is working at his own law office in Sonora.

The State Bar Court Review Department said Parish made the false charge against his opponent, a sitting Yolo County Superior Court judge, with “reckless disregard for the truth.”

Parish tried to link his opponent, Maguire, with misleading campaign mailers by tying him to alleged corruption under former Gov. Arnold Schwarzenegger, for whom Maguire worked as a legal aide before being appointed to the Yolo bench in 2010. He also alleged connections between Maguire and Schwarzenegger’s January 2011 commutation of a prison sentence for Esteban Nunez, son of former Assembly Speaker Fabian Nunez.

In addition, Parish claimed Maguire was involved in corporate bribery while at a Colorado law firm in the 1990s.

Maguire said the claims were false, and Parish later acknowledged he did not thoroughly check out the accusations.

Oh, per the Secretary of State, Aaron was paid $3,850 for this opportunity to flex his superior political muscle. 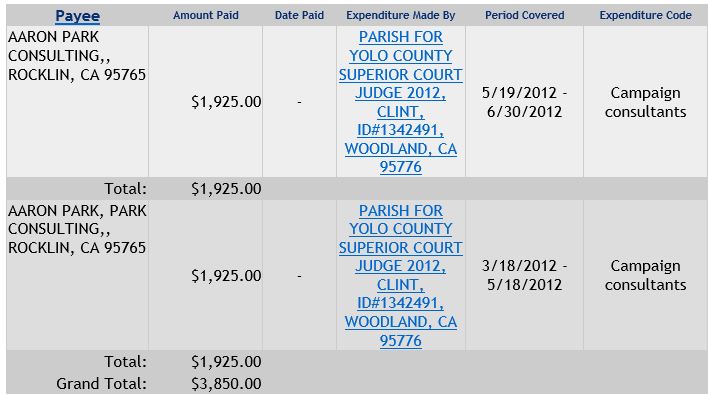 Meanwhile Aaron is still at his day job in Placer County trying to do to CRA what he did for his client.