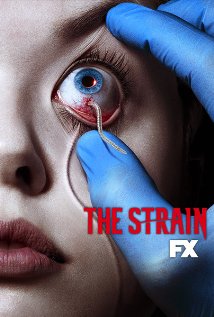 OK; actually, Ebola is The Strain meets the Zombie Apocalypse.

The Strain, by Guillermo del Toro and Chuck Hogan, tells the story of an employee from the Center for Disease Control, fighting against all odds to stop a plague that nobody believes can happen. One of his chief obstacles in preventing the spread of the disease is the director of the CDC—who is personally benefitting from the misery of others—and thus won’t do his job. The director’s political power is more important than doing the right thing.

Lest you think this type of ‘politics over public health’ only happens in the 2009 novel, here is Obama’s CDC Director,

Dr. Tom Frieden, director of the Center for Disease Control and Prevention (CDC), said during a telephone press briefing Wednesday that you cannot get Ebola by sitting next to someone on a bus, but that infected or exposed persons should not ride public transportation because they could transmit the disease to someone else.
http://cnsnews.com/news/article/brittany-m-hughes/cdc-you-can-give-can-t-get-ebola-bus

My nephew works in the hospital in Dallas which seems to be ground zero for this disease in the United States. I am not happy with what is going on.

Matt Drudge sums it up well on his website

The Centers for Disease Control and Prevention said that Vinson called the agency several times before flying, saying that she had a fever with a temperature of 99.5 degrees. But because her fever wasn’t 100.4 degrees or higher, she didn’t officially fall into the group of “high risk” and was allowed to fly.

Officials in the U.S. have been trying to calm fears over the Ebola crisis, but time and again events have overtaken their assurances.

In August, before the first U.S. infection, CDC Director Dr. Tom Frieden said: “We’re confident that we have the facilities here to isolate patients, not only at the highly advanced ones like the one at Emory, but really at virtually every major hospital in the U.S.”
http://www.cbsnews.com/news/ebola-nurse-called-cdc-several-times/

What training? Nurses had none

The statement, which was played in its entirety on CNN on Wednesday morning, also reports that Ebola training at the hospital was “optional,” “nurses have been left to train each other,” and that nurses who interacted with Duncan simply continued treating other patients.

According to the statement, “there was no advanced preparedness on what to do with the patient. There was no protocol, there was no system. The nurses were asked to call the Infectious Disease Department. The Infectious Disease Department did not have clear policies to provide either.”
The union added that “advanced preparation that had been done by the hospital primarily consisted of e-mailing us about one optional lecture or seminar on Ebola.  There was no mandate for nurses to attend training or what nurses had to do in the event of arrival of a patient with Ebola-like symptoms.”  And “there was no hands-on training on the use of personal protective equipment for Ebola, no training on the symptoms to look for, no training on what questions to ask.”
http://www.breitbart.com/Breitbart-TV/2014/10/15/Nurses-We-Were-Told-to-Call-Authorities-for-Ebola-Protocol

Yeah, nurses treated the Ebola patient with no protective gear and then treated other patients. Oh, don’t forget that the hospital discharged the guy with Ebola and he returned a few days later when he was re-admitted and later died.

Memo to healthcare workings, treat this as a radiological accident (or dirty bomb attack) and your protective gear will be more in line with what you need to use.

Ok so what happens when ISIS decides to purposely shoot-up some people with this disease and dispatch them to Western countries to hang-out in shopping malls? The economic panic would be about the same as the Zombie Apocalypse. Economic chaos, government collapses, and general lawlessness. It may not result in the world of Mad Max but it could get quite far in that direction.

Oh, we are still issuing 100 Visas a day to people in the hardest hit African countries so they can travel to the United States. On the plus side, at least Aids is not the only disease with civil rights now.