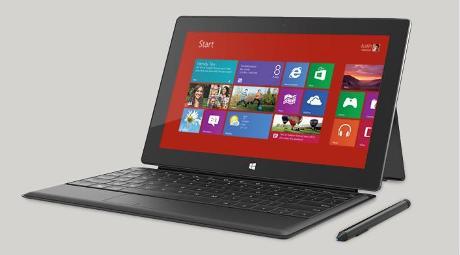 Last year my daughter hijacked my Acer laptop to take to college after she broke the hinge on her HP. (HP laptops don’t like going past 90 degrees when opening the screen.) Recently, I decided that I needed a replacement for my laptop so I could take a few college classes necessary to get promoted at work. After much debating and searching I decided to purchase a Surface Pro from Microsoft.

I looked at the RT version but I wanted to run PC programs as well as apps. My general opinion of apps is that they are buggy and tend to be unstable. This is true of Android, Windows Phone and Windows 8. (Apple burned their bridges with me a long time ago so they aren’t even part of my world.) PC programs are just more robust than apps. Also, PC programs don’t require Internet access and many apps are just front-ends for cloud data. Without Internet access most apps are useless.

Since Microsoft sets the sales price for Surface, it didn’t matter where I purchased it. Generally, I like shopping at Fry’s but their credit card is terrible. You can only make payments via snail mail. You used to be able to make payments on the Internet but they discontinued that many years ago. Their website claims that they now take payments again but I have yet to verify if this is so. Worst of all, they will not accept payments are their brick and mortar stores for their credit card. As a result, I purchased Surface at Best Buy. Best Buy has a multitude of payment options. I got my Surface for 18 months interest free. Best Buy tried to sell me an extended warranty but their prices were extremely high. I registered my Surface on Microsoft’s website and they offer a two year warranty for $149. It sounds much like what Best Buy offered for about half the price.

Anyway, here are my thoughts on Surface.

microSD Card
When I purchase the Surface I bought a 64GB micro SD card to use with the computer. I planned to keep photos and music on it so I wouldn’t fill up the internal hard drive. However, I was unable to use the SD card for this purpose because the Library function in Windows 8 will not allow a removable card to be added to my music library. The Surface has about 85 GB of storage available and my complete music collection is over 35 GB. Windows Media Player will see the audio tracks but will not play them from the SD card. The Music app will play the audio files on the SD card but you must manually navigate to the SD card each time you want to play something from it.

Mouse
Best Buy only had one Blue Tooth Mouse in their otherwise huge store. The mouse was not even on display. It does work fine with the Surface but it creates a huge bulge in the storage case. The mouse is almost as big as my fist; it’s not a typical laptop size. I wanted my only USB port to be free if I needed it.

Start-up & Configuration
I logged into the Surface with my Windows Live account. I was going thru my initiation of Windows 8 when I was asked if I wanted to Trust this computer. I said YES and an email was sent to my phone. I typed in the code from the email and all my settings were copied from the Internet to the Surface. The desktop background on the Surface was the same photo as on my desktop. Additionally, all my Favorites from Internet Explorer and passwords were copied. The email app was also configured to match my desktop computer. While I thought this was cool, it did make me wonder how much the NSA is really watching us.

I like the touch ability in Windows 8 but there is one thing I cannot do successfully without the keyboard or mouse, I can’t get the right click menu to come up for a tile on the Start Screen. You can touch, hold, pinch or do any gesture that you can imagine but it won’t work. Nothing beats a mouse for customizing the Start Screen.

Mount ISO & MS Office
I did install Microsoft Office on the Surface but when doing it I did encounter a bug/glitch in the software. Every time I tried to mount the ISO image of Office that I downloaded from Microsoft I got an error. The error was that the ISO image could not be mounted. After some research on the Internet I found that the best thing I could do was ignore the error since the ISO image was really mounted even when the error said otherwise. I followed this advice and was able to load Office without any further issues.

Old PC Games
As an experiment, I downloaded Diablo 2 from the Internet to see how it would run. The download from Blizzard’s Battlenet website was painfully slow. Wi-Fi speeds are significantly slower than wired speeds. The program installed OK but when it came to running Diablo 2 I hit another snag. The only native resolutions for Diablo were 640 x 480 and 800 x 600. Running Diablo in a window the size of a large label is not my idea of gaming. I tried the fix for bigger resolutions suggested on the internet—this is a third party program that allows more resolution choices—but it would not work. By adding –w to the end of the target line of the desktop shortcut I was able to get a larger windows but still not the correct height. In the midst of learning this, I accidently changed the resolution for the Surface to 640 x 480 more than once. Correcting that problem was another challenge. Even rebooting the Surface would not restore full screen operation once the resolution was changed. This was another time when touch was not precise enough to change settings.

After much trial and error, I did get the Blizzard games to run at full screen. As usual, you had to blend parts of different procedures found on the Internet because none of them was correct.
The first part was posted at Surface Pro brightness bug
It was to download the full video driver from Intel. Use this one unless this is fixed in the Windows 8.1 update. downloadcenter.intel.com

The second part was a completely undocumented key combination that I found. Here is the full post. I FOUND A FIX FOR OLD GAMES ON SURFACE PRO WITH SMALL SCREEN   After loading the video driver mentioned above, start game then simultaneously press CTRL+ALT+FN +F11. When this works, the game will go to full screen. Then you must exit game in the normal way. When you do screen resolution will be wrong. Then set screen resolution using Control Panel or Right Click. After that the games will be full screen when started again and desktop will be correct size.

The other game franchise that I tried without any success on Surface was Command and Conquer. I went on Amazon and despite the bad reviews I bought the C&C Ultimate Collection. This is a downloadable only collection of all 17 Command and Conquer games. They don’t require a CD or DVD to run them. Total downloads are over 60 GB. Before I gave Amazon my money, I actually installed the disk version of Command and Conquer Generals on the Surface through my external DVD. It worked without and patches, or tweaks necessary on Windows 7. After I proved it would work, I gave Amazon my money and downloaded Generals. It would not work. As a form of troubleshooting, I downloaded it on my Windows 8 desktop and it worked great. What I learned was that the Origin software (cheap knock-off of Steam) would not bring up the menu to let me start the game. I uninstalled it on both machines and tried it again with the same results. The biggest difference that I noticed in hardware was that I have an NVIDIA video card on the desktop and an Intel one in the Surface.

Weight and Usage
The Surface weights two pounds. It is heavier and larger than my Kindle Fire. I have not tried Netflix on it yet but holding it above my head to watch streaming video or surf the Internet the way I do with Kindle is more of a challenge. I think I will have to park it on the table next to my bed to use it for longer periods of time. The jury is still out on this aspect of the Surface.

They type keyboard is wonderful. It is thin and reliable. Having it cover the screen when not in use is an added bonus. The click in place feature is clever.

So far I like the Surface. If you get one, get a small Blue Tooth mouse and seriously consider the optional touch keyboard. The on screen keyboard is ok but sometimes covers the part of the screen that you are trying to type in.